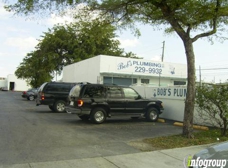 I used Bob's plumbing last week to fix a stoppage on the kitchen sink, which they did however in the process they cracked the water trap under the sink when introducing the snake from the top side of the sink, as this did not resolve the issue they had to introduce it via the air vent in the roof. I call that afternoon to report the issue, however since it was just after 4:30pm (when I believe they close) but before 5PM they did not answer at which time I left a message. I did not receive a call back until the following day after 3PM not to come and fix the problem but to make an appointment to come the following day to look at the issue. At which time I took the decision to fix the issue myself as we now had two days of leak. This weekend I noticed that the gutter where the plumber placed his ladder and lifted the equipment to access the roof was dented. on Monday I called the office to speak with a manager, who was not available so I left a message for a call back, as of today they still have not called me. Based on this experience, considering I had used them in the past, I am unable to recommend their services.

I give them
4 stars out of 5 because of the the customer service. Although very nice,people, they did not show up when scheduled,, and did not call and advise. John at Bob's Plumbing was very professional in trying to first fix my tankless water heater with help from technical support at the manufacturer Siebel Elton. As they found that the mother board had blown out,unfortunately it had to be replaced .I purchased the recommended replacement for my particular unit. , They showed up late, but it was installed with no issues. Will recommend.
O

Very unprofessional. Spoke to Bob's son after paying $250 to fix a plumbing issue at my home. He was rude and said that I would have to pay them to come out again even though the problem reoccurred just three days later!

Dont call these are unprofessionals. Thet ripped me off. Very rude after they take your money

I recommend Bob's Plumbing for all your service needs! I first called this company 7 years ago. Since then, each time I have needed a repair I have used them, I have always been very happy with the service and recommend my family and friends to call John. And, when I do remodel, I plan to call Bob's Plumbing.