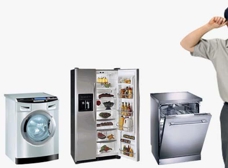 I purchased an Asko washing machine when I moved in to my new appliance. I read several articles about Asko and their appliance, and I was impressed with their innovations and their design. The articles seemed to paint a brighter picture than the reality. For the most part I am satisfied with the performance I get from this washer, but I have had to have it fixed twice in 2 years. That seems like a lot to me. This latest problem was an issue with the water not draining out all of the way after the wash cycle is done. So I called up My Appliance Repair Los Angeles. My cousin Vince works there and I know all of the technicians. They are a great company. Kind of like a family. I sked them if they could send my cousin out, but he was not available so they sent George out. He is an old timer, but he is such a nice guy. He looked at my Asko Washer and asked me why I bought such a complicated machine. I told him because the internet told me to. He just laughed. He worked on my Asko Washer for a while, and told me that the drain was clogged, and that he cleaned it out and it should be working good now. He also took the time to show me how to clean it out myself, so that next time it happens I know how to fix it. That is why My Appliance Repair LA is such a great company. They really care, and if there is anything they can do to save you money, they will do it. Thanks again guys.

I was cooking breakfast the other day when our Whirlpool Retractable Downdraft System made a loud high pitched noise, and quit working. We cook all the time so we needed to get the downdraft fixed right away. So we called up Authorized Appliance Repair. We have used them a couple of times in the past, and we have always been happy with their service in the past. We scheduled a repair call for Saturday when we would both be home. My wife gets nervous when she has to be alone in the house with strangers. The repair tech Vince showed up and he was very friendly and seemed to know his stuff. He examined the downdraft and discovered that the blower motor had gone out. The part we needed was a little pricey, but the labor was very reasonable. We gave him the go ahead to order the parts, and we scheduled him to return on Thursday in the evening when we would be home. He replaced our Blower Motor and had us back in the kitchen in time for to cook dinner. Vince was a really nice guy, very professional, and the final bill was very fair. I would recommend this company to friends.