Water Heater Replacements at Unbelievable Prices! You will save over the National Chains and have a Master Plumber do the work!

General Info
Miller Plumbing is a family owned business serving Montgomery & Bucks Counties. You will deal directly with the Owner who is a Master Plumber that performs all the work so you know you are getting the highest level of service with best pricing around. In fact we are less than all the local home stores. We specialize in all aspects of the plumbing industry and have been doing so since 1993. You can count on us to meet all your needs. We are honest, dependable, and look forward serving you.
Hours
Regular Hours
Services/Products
* Bathrooms* Drain Cleaning* Drain Repairs or Replacement* Faucet Repairs or Replace* Garbage Disposals* Gas line repair or replacements* Hot Water Dispenser* Hot Water Heaters* Kitchens* Laundry Rooms* Laundry Tubs* Leak Repair* New and Old Plumbing Repaired or Replaced* Sewer Repairs or Replacement* Sump Pumps* Toilets* Water Heaters* Water Service Repair and Replacement* Whole House PlumbingMiller Plumbing provides routine & emergency plumbing services. We'll handle your Water Heater Repairs or Replacements. Leaks or Clogs we handle all your plumbing needs.
Payment method
master card, check, amex, discover, visa
Location
Serving Montgomery & Bucks Counties
Accreditation 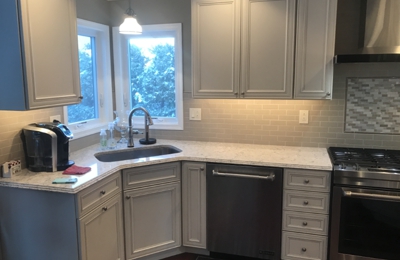 Mike is the best. Since we moved to our home in 2014, Mike has done numerous projects for us. He gets back to you quickly, works efficiently, and provides the highest quality service. I will NEVER use anyone else.

Hello Everyone,
Without a doubt, Mike is THE BEST Plumbing Professional, contractor, I have ever had the pleasure of working with.

He is HONEST, EXTREMELY KNOWLEDGEABLE, FAIR and ALWAYS RESPONSIVE. There is no better value out there.

I *thought* I was going to face major plumbing repairs costing over $3000 based on ANOTHER PLUMBER'S ESTIMATE, a plumbing company which has previously done work in my home but with whom I was not satisfied because they were pushy and I *thought* were expensive, but I had no basis for comparison and plus, it was an emergency situation and I was cajoled into using them. Before I hired this other second-rate company again, I wanted a second opinion so based on Yellow Pages reviews, I contacted Mike.

Thank goodness I did.

I explained the situation but did not share the other company's cost. Mike was able to come over within a few days and he patiently walked me through all of the issues, which took over an hour. Mike was HONEST and PRACTICAL and did not try alarm me or coerce me into getting work done. He recommended what was necessary and what could wait, and his charges were about HALF the other's plumber's cost.

Needless to say, I felt Mike was more honest and hired him. Mike showed up when he said he would, ON-TIME and work was completed WHEN HE SAID IT WOULD BE!

On another occasion, I had an emergency plumbing situation and Mike worked with me, AFTER HOURS, and helped me resolve it for a VERY FAIR price.

I've been a home owner for over 14 years and dealt with many contractors and Mike is by far, one of the few true PROFESSIONALS in the industry. Really, at the end of the day, Mike's a good guy, and it doesn't feel like he's trying to cheat you or make a dollar. Just an great professional plumber. The only issue: he's too popular so plan ahead :)

We used Mike to fix a leak in our main bathroom sink a few weeks ago. He removed the vanity & sink, replaced the faucet & corrected some faulty plumbing. The unit looked better than before he came!

We originally tried calling three plumbers for four weeks. We could barely get a call-back. One finally came, turned off the water & never came back. We could not use the sink for a month.

We were lucky enough to find Mike by searching the internet where he had great reviews. They are all true!

Mike is extremely responsive (he called back the same day), is extremely knowledgeable with all plumbing techniques, has great work skills & is very, very neat. He wants to do the job once, do it right & do it so it lasts forever. Mike is a very caring, genuine, respectful person. He takes great pride in his work & charges a very fair price. He is a plumber you can trust.

We feel fortunate to have found Mike. He is now our permanent plumber.....period! We wholeheartedly recommend his services & vouch for his honesty.

Miller Plumbing Inc. did a great job in my bathroom (some toilet work) and kitchen (some sink faucet work). I will never use another Plumber now in the Blue Bell area, and they are very affordable. Will call them again whenever I need assistance. Thanks again. 5 stars all around. :) ~Pam

Miller plumbing is my go to for all plumbing needs. Mike always responds immediately, fixes every problem and his follow up afterward is great and rare to see these days. He is a true plumbing ninja and business professional. If you want it done right the first time, contact Miller Plumbing!

We hired Mike to replace a toilet and sink in our half bath. His quote was competitive, and we really appreciated that he took the time to recommend new fixtures that would work well for our bathroom -- fixtures which were reasonable in price and easy to find at Lowes. He was able to do the work in our tight timeline, cleaned up after himself and was friendly and respectful while in our home. A few days after install, we noticed a slight leak in the new toilet which turned out to be a manufacturing defect. Mike was at our house ten minutes after we called him about it, and went out of his way to fix the issue even though it was in no way his fault. We are so glad to have found Miller Plumbing and will use this company for all our future plumbIng needs. Can't recommend Mike highly enough.

I am very pleased with Mike Miller. He is an experienced plumber and his service is excellent. I trust him and his work and will use him again. A+++

I highly recommend Mike, he is an excellent and trustworthy plumber. Originally, I made the mistake of calling out the big-box orange truck plumbers. After getting overcharged and receiving the run around from them, I called Mike. Mike quickly came out and identified all of the shoddy work done by the orange truck folks just a month prior. Mike showed me exactly what was done wrong and remedied the situation quickly and at a fair and reasonable price. It was clear to me Mike was not out to sell me on more unnecessary work, but to educate me on what needed to be done. Mike came out on a Saturday and took great care in keeping my home clean while working. Mike actually took photos and with his help, I was able to get a refund from the 'big company' I had originally used saving me hundreds. Mike doesn't need to boast in obnoxious tv ads, his experience speaks for itself. From here on out, I will only call Miller Plumbing. Highly recommend!!

I called Mike as we were having water pressure issues. Mike did a fantastic job at a great price. Mike is an honest, friendly and professional plumber. If I have any more issues, I'll definitely call Mike!

Mike Miller was referred to me several years ago and I've been using his services ever since due to his excellent service and skills. I own several older rental properties that can have difficult repairs that other plumbers don't want to bother fixing correctly. Mike has always come through for me and gone the extra mile. When you own rentals, tenants expect things fixed promptly and Mike shows up on time and will call with a time frame to expect his arrival. Even my tenants have complimented his work! I had too many call backs with a previous plumber so I've been using Mike and no one else since we met. Call him, you won't be disappointed. He takes pride in his work and doesn't cut corners like others tend to do. His work is professional and top notch.

I had called Mike the other night because I saw water coming out of the corner of my ceiling. He answered his phone right away, and was so nice and professional! He calmed my nerves and was prompt with his arrival time. He fixed my leak, which was a frozen pipe and was very reasonable with the price. I figured because of the weather and time of call I would pay the price, but he obviously doesn't take advantage of people in their time of need. He will only benefit from his honesty and knowledge, because not only is he my plumber from now on, I'll be recommending him to my friends and family! Thank you, again for your service!

Great service. I needed a faucet and a couple of shutoff valves replaced. It was scheduled quickly, arrived when expected, reasonable price, courteous and professional. Job well done. I will call here again if I need plumbing work.

Mike is an excellent plumber. I hired him to install a new bathroom vanity, and a filtration system for the fridge ice maker and kitchen faucet. I was very impressed by his craftsmanship. Everything looks and works great. He's an extremely reliable plumber with very reasonable prices and just an all around good person. I'll be recommending him to all my friends and family from now on.

Mike went above and beyond my expectations. He replaced a toilet flange and I watched him throughout the process. He's courteous, extremely thorough, and his rates are much better than others from which I obtained quotes. I'm recommending him to all my friends and acquaintances.

Mike did a beautiful job installing a water line for a new ice maker. He is a pleasure to work with; cares about his customers and reasonably priced. Mike is an expert plumber,reliable and does excellent work.

Mike did an excellent job. I posted an inquiry on his website and he got back to me very quickly. He was very accommodating when it came to scheduling my hot water heater replacement. He service was fast, well done, and reasonably priced. I would recommend his services to anyone looking for a plumber in the area and will most definitely be using him in the future for all of my plumbing needs.

Excellent Plumber. He really cares about the customer and is very knowledgeable and reliable. His service is very fast and reasonably priced. I would definitely recommend him to anyone who needs a plumber.

Having read all of these glowing reviews, I decided to try Miller Plumbing for a job I wanted done. Mike Miller was a true professional throughout the whole experience. He was explaining every step as he worked and offered to look at any other plumbing issues I had. I will definitely recommend Miller Plumbing. Very reasonable as well.

I typically don't bother writing reviews, but I felt compelled in this case. I called Miller Plumbing today after realizing our water heater was shot. With visions of showering at my In laws for the next few days, Mike told me he would get our water heater replaced today. He lived up to that promise and was awesome! He exceeded our expectations in every way, including price. If you are looking for a trustworthy plumber, call Miller.

Michael Miller Plumbing is over the Top. His services are precise and clean. They added a dish washer and garbage disposal to my kitchen. He ran hot and cold water lines to my garage and added a sink. AWESOME! Great Prices! Thanks Michael.