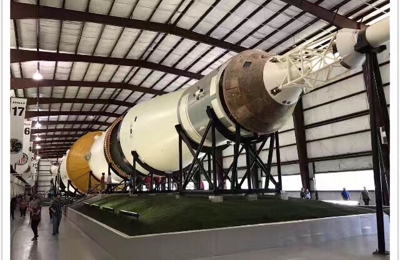 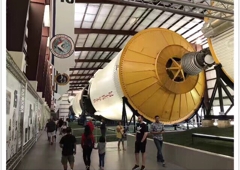 We had so much fun at the space center! My younger daughter loves it. Definitely the highlight of our trip. It was expensive but absolutely worth it. The tram was especially good. The movies were also excellent, We really enjoyed seeing Saturn V, the size was epic. Kids even took home toy rockets. Our little girl has decided she wants to be an astronaut! Highly recommended!

They don't give you that much useful information or interesting items although the presentations are two long. Not so much fun. Whereas you pay $5 for parking and $20 per person. Just go in the case you have nothing else to visit or do in Houston.

Being new to the area, I figured a trip to Space Center Houston was in order. I was disappointed at what I found and glad that I hadn't paid the full $18.95 (the info posted here is out of date - it's no longer $17.95) because I bought my tickets at HEB at a discount - $12.95.

My first disappointment was the $5 parking fee. Once inside I scoped out the food court and the prices there were exorbitant . Even the soda machines were a rip off - $3 for a soda from the machine! Also, as another poster mentioned, there are additional fees for specific rides. I expect prices to be high at tourist attractions, but I really felt like I was being taken advantage of here.

There is what amounts to a fancy playground in the center of the building. There are signs everywhere that tell you for an extra $2 you can become a member and kids can come play anytime. If it weren't for the $5 parking fee that would be a good deal because the kids were all having a good time. But remember, it was just a play area - they weren't learning anything about space. Around the perimeter there are some more educational interactive exhibits, but kids got bored with those pretty quickly.

There are a few films to see while there and they were worthwhile, but nothing to write home about. The tram tour is good because you get to go into the actual Space Center. The tram makes three stops, one that takes you to the control center for the Apollo missions which was in operation until 1996, one to the space shuttle mock up area where you look down from a gallery above and that was very interesting, and finally they drop you at the rocket park which has three rockets - one housed inside that's pretty impressive. However, once you've seen it once there's no need to go back and it's not good for little kids - I'd say kids would have to be at least 9 before they appreciated the tour at all.

I may take visitors with young children to Space Center Houston, but it won't be high on my list.

When I was growing up we would go on school field trips to NASA, which at the time were free. I had not been in years and I figured that since it was now a charge to go that it would be even better than before because they would have the money to do more with it. Was I wrong!! That place was the biggest waste of money ever! The attractions were worthless and the tram was pointless. Years ago you could go into the area where mission control is and see it. Now that is not on the tram ride and basically you just drive around the backside of the buildings and through the parking lot. If you get lucky you may see a deer, but that is about as exciting as it will get! The cool shuttles which were outside are now inside of a building and difficult to see. Don't waste your time or money!

The first time I went to Space Center, I was very excited to see all of the ""real"" NASA stuff. The trolly ride to Mission Control is worth the price by itself the first visit. To justify the high cost of admission, and to get people to return, they have these poorly executed ""themes"" like ""Gross!"" etc. Every subsequent time I've been to Space Center, it has been with visiting friends and family. I go because they want to see Mission control. Were it up to me comletely, I would not be a repeat customer

Being from Houston, my family was extremely disappointed after all the hype. Most of the kids exhibits were broken or disfunctional. The tram consisted of 'this building houses this or that', no viewing just a short description of what would be inside ""if"" you could see in it. Way too expensive, and my 3 kids were bored after the first hour. Poor knowledge from the majority of the younger employees. However, the older employees did know quite a bit. I would choose a different attaction for travelers.

I recently took my students on a field trip and boy was I impressed! The education staff was the best I have ever come into contact with. They were extremely helpful in every facet of my visit from taking my reservation to greeting my children warmly upon arrival. The attractions are top notch! I would definitely recommend visiting even if I wasn't on a field trip. We took the tram tour and were blown away by the quality of the tour and the professionalism and knowledge of the tram staff. My high school students thought getting to visit the actual mission control was ""really cool"". I had occasion to speak with the tram tour manager who was very helpful, friendly and knowledgeable. A definite must see!!

Without a doubt the best part of Space Center is the tram tour of mission control. you get to sit in the VIP room and look through the glass where all the history was made. Just being that close to where the phrases ""houston we have a problem"" and ""One small step..."" were uttered was worth the full price of admission. There is plenty for kids. The gift shop and IMAX theatres(with artifact exhibits) were also two must sees. BUT PLEASE HEED THIS WARNING. DO NOT EAT IN CAFETERIA!!!!!!!!!!

Space Center Houston reveals many of the secrets of space travel. It has hands-on exhibits that allow you to imagine yourself in space. Perhaps the most captivating was the space center control that I had seen some many times on TV. Like other visitors that day, I was allowed in during a simulation of a mission and can only imagine how exciting it would be during an actual mission. I highly recommend this attraction to anyone visiting the Houston are - for all ages!

This place is severely over-rated! Don't come here unless all of your children are under 5. It's too boring. Not cool enough for teens. Too expensive as well. Don't waste your time or money.

Like most of the educational-entertainment attractions, Space Center Houston treats humans as all being 4 years old. Sure adults and kids enjoy themselves, after-all they aren't at work or school, nor are they sitting in front of the TV at home. Are we truely educated or entertained by such low cut mentality? I don't really believe we are.

The Space Center was a big disappointment. Most of the attractions ran at limited, inconvenient times (conflicted with tram schedule). The tram tour was run by teenagers who knew almost nothing about the space program. Information, in general, was scarce. The museum is set up for kids, but even the kids I saw there looked bored. The rocket park has only 3 rockets that you get to look at outside in the summer heat with no shade for about 10 minutes. The tour guide made ignorant, openly partisan comments. To add insult to injury you have to pay $4.00 extra to ride the simluator. Basically, I would never recommend it to anyone. The people who have described it as ""Disney-like"" are only half right--it is designed for kids, but at least at Disney you get your money's worth.

My family loves this place. We go 3 or 4 times a year with out of town guests.

I believe that the space center houston is the best place, that a family can go and get an indepth view of our countries rich and unmatched wealth of travels to space, and a reassuring hope of continued exploration for the generation to come. Man can travel far these days, and with the space center houston, we can go farther,by stimulating young minds for our continued space travels.

My take on it was the tram tour was OK, certainly not spectacular, and I probably would have enjoyed the rest of the facility more if I was more interested in space exploration. This place would be a good choice for families with young kids, because of the playground type atmosphere.

You will be proud of America after visiting Space Center Houston.