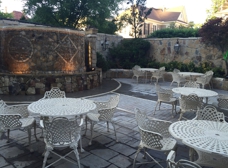 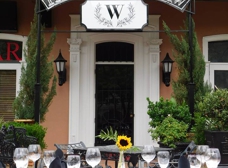 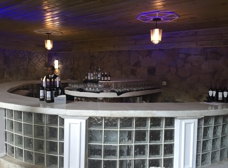 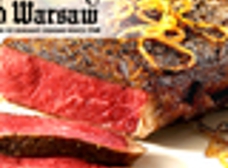 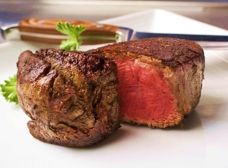 My partner and I unfortunately decided to celebrate an anniversary here. Big mistake! We ordered the lobster and steak, iced tea, and desert. We never left our table - both of us sat until done and then we thanked the staff and left together. Dinner was OK with steak a little tough. They were not at all pleased that we don't drink and ordered tea with dinner (I always compensate well for us not ordering wine). So where's the problem? Ali Heidari decided that he would make a very inappropriate comment, about us, to a business acquaintance of ours.

Yeah Ali, we know a shit load of people. Yeah Ali, I own and live in uptown and tell everyone what you did! Who the hell did you think you were dealing with?  Now to spare the owner any trouble in typing out a canned apologetic response, don't bother, as I'm the guy who came to your restaurant a couple of days later to confront you in person! We had nothing to hide nor did anything wrong so I was eager to hear from YOU! I then took you outside and sat with you awaiting an explanation. What I got from Ali Heidari was total BS exculpatory language that had nothing to do with our upset. Not to mention his bloodshot eyes caused by his heightened blood pressure when I corralled him and said we had to talk.

Figuring this was his spineless approach to his royal screwup, I up and left. No apology from him or staff! To this day we have no idea why he would do such a thing against us. Well, the staff was compensated with their $60 gratuity and unfortunately the rest of our bill went to help sustain this miserable and tired place. On the day, I'm most proud to announce that I've steered more people away from this poorly run attempt at fine dining.

Ali, your unsurprisingly dishonest Facebook 5 star menu rating should look more like your increasingly dropping Google 4 star rating, 3.5 Trip advisor rating, Yelp 3.5 star rating, Apple Maps 3 star rating, and Open Table 3 star rating as it's misleading and inaccurate but not surprising considering who I met when I sat with you.
FORGET ALI HEIDARI AND THIS PLACE !!!

Have been going to The Old Warsaw for years, even when the food has not been great have always had a good time. Made a reservation for New Year's eve, for the first time ever they called and wanted a credit card to hold the reservation, I was hesitant because my dining partner was working out if town, was told we could probably work something out. Did have to cancel as partner could not drive back because of weather, when I called they insisted they would charge 60 per person for cancellation, and denied that I was told we could work it out. We have never cancelled before this. Very unhappy will never go back.

Old Warsaw is my hangout every Friday night. The great food never disapoints.

Our company was entertaining clients while in Dallas and we chose this restaurant. What a mistake. After the 5 of us ordered our food and after we had received our appetizers and salads, the waiter came to inform us that they did not have 3 out of the 5 entrees we had ordered. We chose another option and waited for it to get cooked. This is when it started going down hill. The food came out undercooked and raw. Half of our entrees were not edible. We scratched the entrees and went right to dessert. The raspberry soufflé came out raw and tasted like egg whites with couch syrup. When we went to complain to a manger, they told us that there was no manager on duty. They brought us the bill and wanted us to pay for the food we did not eat. I demanded to speak with a manager and the waiter said follow me. I got up and followed the waiter to the hostess stand where he picked up the phone and called someone for me. He then put me on the phone, at the hostess stand and in front of incoming guests, and had me talk to some guy. The guy said he was the manager and I could here thursday night football on in the background so I guess he was at home on his couch. After explaining myself, the manager said he would "take care of it" and so I put the waiter back on the phone. The waiter then left with my credit card and came back with a charge receipt for 40.00 off the 496.60 bill. I refused to pay but needed to leave to get to our event that night. I signed "In Dispute" on the charge receipt and left. When I got back to my office 3 days later, the credit card bill came in the mail with two charges on it (450.78 and 496.60 from the same restaurant) so it looks like they double charged me for my horrible experience. WARNING - I would not eat at this restaurant, ever! On a funny note, while we were eating our dessert, the violinist came by our table and played the theme song from the movie "The Titanic" while the ship was sinking - let this be a prelude to this restaurants closing - it would surprise me if this restaurant is still open a year from now.

The Old War Saw was a nice, quiet, elegant restaurant. It was a perfect setting to take my mother out to eat to show her my appreciation for everything she has done. We started off with the escargot which was served with the most delicious garlic sauce. After the wonderful escargot we had a delightful Caesar salad while we waited for our main entree. During this time the waiter would come and check on us from time to time giving us excellent service. After the salad, came the grilled prime chateaubriand, cooked to perfection, it was definitely one of the best piece of meat me and my mom have ever sunk our teeth into (a must get). Once we were done with our main entree, we debated on getting desert so as the waiter suggested we get the grand marnier soufflé, we did, man was it great! it was as rich as could be and it didn't have a grainy texture which made it just perfect. Overall I gave it a 5 star rating because from when I walked through the door the service was very attentive and the food was just amazing. If ever in the area The Old Warsaw restaurant is a must-go.

My Wife and I made a reservation to celebrate our wedding anniversary. We were taken to a large table by the window. The meal was exceptional, beyond our expectations. The service was a cut above. Simply wonderful, would definitely return.

The wine pair is a must, the food is very good... But what really make this restaurant something else is the service it provides. From the kindness of the manager to the politeness of the waiter, everything is great. The atmosphere is really quiet and romantic

If someone does not give this restaurant 5/5 then they must have eaten somewhere else. Ambiance is amazing; the atmosphere in the dining room was top notch, especially with the Piano. The meal, well, words can’t explain it. Service was unreal. I could see why so many people propose there.

We had the most amazing meal. Every course (with the wine pairing because if you're going to go for it- go for IT!) was better than the previous one. No one was snooty or pretentious. We never felt rushed- it was absolutely the best way to end our vacation. If you're a coffee lover, you must order the coffee. The super cool way they make it tableside is amazing, So fun.

My family and I were on vacation during the Easter and we went to Old Warsaw for Easter dinner. This is definitely a must in Dallas. The food was great. Be sure to try the Clam Chowder Soup, Lobster Tail. We were too stuffed for dessert, but they looked amazing, excellent service and atmosphere.

This is my favorite place to eat in Uptown Dallas. It is an event more than an evening out. This is a 5 1/2 out of 5 stars. The menu selections are unique; and the service is excellent.

This is my favorite place to eat in Uptown Dallas. It is an event more than an evening out. This is a 5 1/2 out of 5 stars. The menu selections are unique; and the service is excellent.

My husband and I had the New York Steak, Old Warsaw Salad for two, Garlic Whipped potatoes, and asparagus. The whole meal was just great! Service...just the best, looking forward to being back.

I Highly recommend Old Warsaw . Service was attentive and friendly. Didn't plan on dessert but had Cherries Jubilee for four that was exquisitely balanced. Most of the time, one ingredient or another is overpowering. Not so here. Every flavor was perfectly presented.

My husband and I visited Old Warsaw for the first time for our anniversary. It was by far the best dinner I could ask for. The service was impeccable, and the food was simply amazing. The Chilean Sea Bass was to die for. From our first glass of champagne, to our last glass of wine with dessert, exceptional meal... near perfection.

I love this place. The food is always excellent and the service is great! I also like the cozy atmosphere since it's on the smaller side. Anything pan seared (Salmon, Filet, Portabella Mushroom, Crab Cake) is exceptional

The food was excellent as was the service and staff. I have been several times now and will definitely keep going. Great food, great service, quaint atmosphere, I highly recommended The Old Warsaw.

Our holiday dinner at the Old Warsaw was wonderful. The food was delicious and very well presented. Out waiter was the best one by far- very funny and provided absolutely impeccable services. Life music to go alone with the dinner is an amazing touch to already unforgettable atmosphere.

After noticing their sign going north on 75 me and my wife decide to try the Oldwarsaw for the first time. A new place for our 13th year together. It was a decision i will never look back on. I started off with the Lobster Bisque which was delish. My wife decided to get the Caviar. by the way she ate it, i knew she loved it. next came my Fillet mignon with mushrooms, and her Chilean Seabass. Normally i would have never chosen something with mushrooms, but the Lobster Bisque definently helped me change my mind. It was a good choice. She said her Seabass was the best she had ever eaten. To finish we had Bananaa Foster. We were stuffed. I would reccomend the restaurant to everyone.

The Food, Service, and the Decor of the whole place deserves 5 stars.

A sudden decision to visit the Old Warsaw the other night was a very good one. We had an amazing time at the restaurant. Food, service and everything was wonderful. Great atmosphere and enjoyable life music. It was a nice way to spend the end of the day.