We help rebuild your credit. 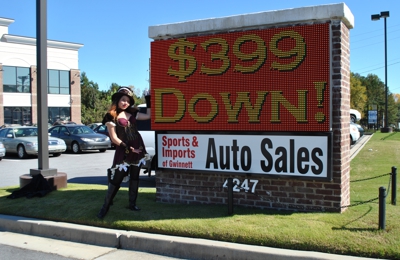 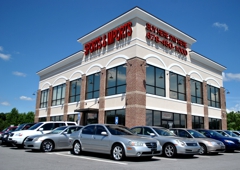 William and Austin did an amazing job at making the process as easy as possible! They answered every question I had, they didn’t seem bothered when I asked every question under the sun! Truly amazing! Wouldn’t hesitate on buying from them again!

I felt welcomed went I walked in. Answered any questions I had. Walked me through everything and were upfront with everything. No stress, no pressure, and easy to work with. Very satisfied. I wasn't expecting to drive off with my credit but I did. These guys are awesome. Highly recommend.

They have done a great job at getting people to do positive reviews..and to be clear they ask you to do a review right as the deal is done..you don't know the experience with this dealership until you have dealt with them for a longer period of time other than just the sale.They advertise to send referrals and you then get a free car after your fourth referral FO NOT BE FOOLED.I have sent over 7 referrals and they claim the others are not noted,they CLAIM the customer had to stay in the vehicle for x amount of time how can you control how long a person stay in the vehicle but the fact is a purchase was made and they have acknowledge that by giving me the gift card which they also advertise that if you refer you will get $250cash no it's a gift card..so how can you acknowledge the referrals yet here it is over a year or more later and still I do not have my title in hand..which was supposed to be given to me AFTER THE FOURTH REFERRAL..SO YES THE POSITIVE REVIEWS ABOUT THE INITIAL SALE IS COOL but this is about their so called referral program..these people have made plenty of money with me referring customers yet they have not and REFUSE TO STAND BY THEIR VERY OWN POLICY OF THE FREE CAR EVEN AFTER THE REFERRALS WERE VERIFIED! SO me like a fool have continued to pay a note that I literally do not owe and have not odealership until wed in months..my lawyer has gotten involved,it's a shame that a person makes money yet take advantage of the not so privelaged for what!? Stand by your word and then the employees ARE IN THE KNOW AND YET THEY STAND UP FOR A COMPANY WHO WILL TAKE ADVANTAGE OF SINGLE MOTHERS AND MINORITIES.A DAMN SHAME!

My experience at Sports and imports was great. The sales rep Deen was outstanding!!!!! He had great customer service support. I really appreciated his services.

I've brought 2 cars from this company and have never had a bad experience with anyone! The customer service is very helpfull whenever I need them and my account manager Jackie is always there when I need her

There is no way I would ever buy another car or recommend anyone going there to get a vehicle. I have had to take my truck in several times to get repairs done to it, but in May of 2015 I had to have a new radiator put in and almost a year to that day in 2016 I had to get any other one again and yes, I had to pay for it again. They called and said I needed new breaks and an oil change. After they were done I picked up my truck and was almost home and went to put on my breaks and my front tiers locked up and almost caused me to wreck and the attitude I got when I called them was that it was my problem They asked me what I wanted them to do about it. I told them they needed to fix it. So, they took it to the Gainesville location to their mechanic to get it fixed the correct way. Not to long after that my truck started to leak radiator fluid and I also checked the oil and it was so low I had to add 3 quarts to it. Because I lost my job and was behind on payments I was given a hard time about them fixing it. They did work with me for a bit with my payments but then I was told by one person that I was lying about not having a job and I just didn't want to pay them. I was in shock that someone would have the nerve to say that. I really lost all respect for those people that are paid to be so rude to people. They just kicked me down more when I was having a hard time finding a job. And let me just say I was never late with my payments when I did have a job. My truck was fine before I let them fix it and when I got it back it seemed everything was going wrong with it. I feel they know that the vehicles they sell are bad and they hire mechanics that don't know what they’re doing so you have to keep taking it back to them to fix it. I am almost to the point of just giving it back to them, that place is ridicules and some of the employees are rude. I don't understand how a company like that can get away with selling vehicles that are bad and get away with knowing they are not in good condition. And forget about speaking to the manager of that place. That person will not give you the time of day! Needless to say, I will be looking to get a vehicle somewhere else. And please take my advice look somewhere else if you need a vehicle and save yourself the headache of dealing with that place!

Wonderful experience with Sports and Imports. I would highly recommend them to friends and family. Mary Blacknall was a pleasure to work with she made the car buying experience enjoyable and stress free

My fiancé and I purchased an SUV from them. Our salesman Josh was horrible. He was nothing but rude wouldn't let you finish your sentence before he was already cutting you off. Before my fiancé had signed any papers we noticed that the heat and ac was not working at all. The salesman Josh stepped towards the car and said "oh yeah don't waorry about that the next few days you have off to get it in here we will fix it free of charge". Called since we had a few spears days they now have had our car for over a week. When we try to call to get infor on our car no one wants to answer your questions. Josh had gotten on the phone with me and stated they couldn't start to look at our car (they already had it for three days) since we had no insurance on it.. Which was a lie he just didn't know what was going in. I would never recommend this place in Buford to anyone ever....

We would like the chance to help you out with your issue please let us know a name on account so we can look up account and call you back to discuss options. Thank you kindly, Alley Garcia

This listing has been claimed by a business representative.
Helpful(0)ShareFlag
Dee A.

My son Purchased a car 5/31/16 , after being told by salesman Brian that they wouldn't sell me a car that had problems. Noticed a few problems before closing the sell and was told that they would be fixed the next morning. He returned to the store 6/1/16 9AM , just to be told by my "contract manager" that he did not have that authority and that He was pretty much out of luck for the repairs. Then in an effort to speak to someone of higher stature than his "contract manager" to get the issue resolved, she continues to disrespect his wife by rudely telling her to " Shut Up and Sit Down " or she wouldn't get anyone for her to talk to. At the end of the day No supervisor or anyone of higher authority than her came to speak to us about our complaints. Sports & Imports of Gwinette is completely unethical and I do not recommend this company to ANYONE who believes they should be treated with respect and in a ethical manner. This company takes advantage of the consumers need for a vehicle.

Very bad customer service I would never recommend anyone to go to the dealership to get a vehicle the account managers are very rude and disrespectful they have no manners. Really wish I did not get my vehicle from them and wish I could take it back.

I recently paid off my car...2 weeks later they still drafted my account ( that was on a friday) they turn around on tuesday and take out another 657. When i called to find out why they said my bank never released the funds to them so they credited it back to me (Lies lies lies, i would notice if i had 857 more dollars in my account than i was supposed to) then they said i still owed them and i needed to provide them with bank statements to prove it...so within one month this company took 1713.00 out of my account that they absolutely had no authorization to do so at all.

Kay is very helpful with the car buying experience. She even took the time out to make sure my special needs where met.

They are great. They are very helpful. They are really nice. They have good prices. They have vehicles of all Kinds.

I bought my first car here and Ms Kay helped make the process so easy and helped me get approved into a really nice Jeep Grand Cherokee. I was very pleased!

I had a first class experience at Sports and Import of Gwinnett. Mike Malloy is a top notch salesman and person. I would highly recommend his services and expertise. Will most definitely do business with him again!!

I really had a great experience at Sports & Imports of Gwinnett. Especially dealing with Ms. Kay who was/is wonderful!

When I got to the dealer a young lady Tara was assisting us she was very nice and super polite. I will go back to purchase another car. I will also recommend the dealership to my friends and family.

Excellent service!! I was referred here by a friend who had bad credit and they worked with her to get a car she wanted. I now own a car I love with affordable payments thanks to the team here at Sports & Imports!

I have two vehicles from and have done three referrals however I can't seem to get my payouts when they say they will be available. On top of that I keep getting reminder phone calls about my payments that I've always paid on time. Like really what's really going on.. Smh!!