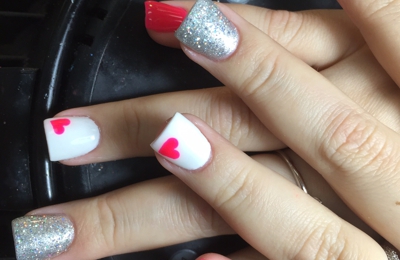 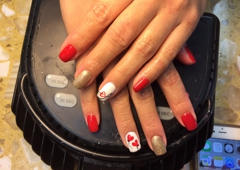 I wanted to spend more time with my family, so for christmas I got everyone pedicures. I've only gone once so far, with my 16 year old niece and my 2 younger sisters, ages 15 and 17. I was a couple minutes later than everyone else, so they were already started. I sat there for a good 10 minutes waiting for them to simply turn a knob on my foot basin so my feet could soak while everyone else's feet were being worked on. Slightly irritating, took half a star off for that. Then they pressured me into getting the shellac gel nail polish or whatever has the plastic in it, instead of plain nail polish even though i told them i only wanted regular polish due to the fact I'd be back in with another group of people within a few weeks. I took off another half of a star for that. And the staff at DaVi Nails is so fast you can't even enjoy it! I came home with callouses STILL on my feet even though they use that cheese grater looking thing... it's like they barely even try, so i took off a full star for that. :/ overall, they did ok, my shellac/gel/whatever it is is still going strong a month later, and I've postponed going again until this polish job starts to go bad. That's loss of clientele on their part. But whatever. They wanted me to get the gel so i got it. They also told me the wrong price for everything. When i bought the gift cert's., i told her i wanted 5 pedicures. She said pedi's are $30 a piece and if they wanted to add fake nails it would only be $5 more. At the end of the session with my sisters and niece, everyone's pedis were $35 a piece, and to get anything other than regular nail polish would be upwards of $50. I was never told that, and people ended up having to pay out of their own pocket for something that SHOULD HAVE BEEN already paid for. I'm taking another star away for that, for a total of TWO stars. And to think, i have to go back two more times to fulfill christmas wishes -_-

They are really good! They make your nails look fabulous!