Hulett Environmental Services is a local, full-service environmental  pest control company specializing in state-of-the-art pest control services that protect your home, family and pets from pests and the health hazards associated with them. Whether you are looking for residential or commercial pest control, lawn care services, or termite solutions such as Hulett's No Tent Treatment, we do it all! Family owned and operated for over 45 years, Hulett provides the friendly, personalized service you expect from a family business while still remaining the leader in the latest pest prevention and control technology. Our services are available all over South Florida.

We won't give pests an inch, so rely on us to get rid of your pests for good.  Ask about our environmental pest control standards with all of our pest removal services today.

As a full-service, family-owned and operated, Florida company, Hulett Environmental Services â€” with its customized Healthy Home programs â€” has taken the lead in providing family, pet, and planet friendly pest control solutions for over 40 years.

Overseeing Hulett's commitment to excellence is Tim Hulett, President and CEO, who are a lifelong Florida resident and a graduate entomologist from the University of Florida. As the former president of Florida Pest Management Association, and as an active member in both the FPMA and National Pest Management Association, he is committed to supporting all that this vital service industry can offer to Florida families.

Education and training are at the forefront of every successful business, and Hulett is staffed by the highest caliber of employees. Our full-time, state-certified, pest control division â€” in conjunction with Bugs University â€” helps to insure that all of our employees are continually updated on the latest products, proper usage and handling, and specific solutions to the invasive pest problems so prevalent in Florida. 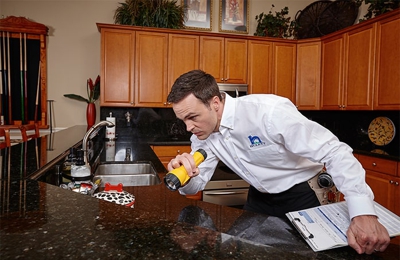 I had an app. with Gary Scher for a flea inspection at my apt. . He was very informative .and did a detailed evaluation . He was very honest and said I did NOT have fleas . I was so impressed with his honesty and wanted to say how rare it is for business to be that honest . I would give him a 5, out of 5. thanks for your service Shirley F.

Unprofessional inspectors were rude and dishonest and almost had me sign away any rights I may have. A different pest company advised me later same week there was no "infestation" as the Hulett inspector had me believe. I came scarily close to spend thousand$$ on extensive unneeded work and I'm glad I decided to get a 2nd (+ 3rd..) opinion. I'd suggest anyone who consider Hulett to get at least two other opinions and estimates - or to simply save the time and aggravation and just skip them all together as this is a rouge company.

PLEASE DO NOT CALL HULETT - SHOP AROUND!

On August 23, 2014 we had a sales rep form Hulett Pest Control to estimate our home to be tented for termites & possibly other pests. On September 09, 2014 we contracted for their services at which time he (sales rep) required and was issued a deposit of $700. Turned out that this guy was incompetent (we had to pursue him relentlessly). After being given the run around for over 4 weeks, the process finally started yesterday (Oct. 16).

After the “fumigators” came in they advised that the protective bags (which was supplied by the sales rep at the time of the contract / deposit) had to be doubled, we were never advised by the sales rep that ALL consumable items were to be doubled up in the plastic bags; had to unpack and double bag our groceries, medications, freezers & refrigerated contents; this was extremely stressful.

Heard a loud noise on the roof, went outside to see what was going on, saw one of the “fumigators” going up a ladder toward the roof, carrying a huge roll of tent, he threw the tent down so hard on the roof, then sat down on top of it while panting! I was in unmitigated shock; concerned that he did not damage any tiles! We were NEVER advised that this was their procedure.

Meanwhile, 5 strangers invaded the residence and went through EVERY drawer, closets, bags, the garage & everything that was covered up or nailed down!

BUT WAIT THERE’S MORE: We of course slept elsewhere, and the next morning (Oct. 17) around 8:15 AM, my husband called the sales rep to inquire about what time the “fumigators” were to be expected to remove the tent, he did not answer his phone, however, the “fumigator” called back a few minutes later & retorted, that they were already at the house removing the tent & inside the residence removing their equipment! What horror, we do not know these strangers, how dare they think that they could just walk in & out of one’s home without informing us. When we questioned this “fumigator” about this he said that this is the procedure & that is the way it is & that’s all!! The “MAIN fumigator” (said his name is Kunta), stressed that it was NOT his duty to inform any customer of their practices; IT IS THE sales rep’s.

I FEEL THAT THIS IS UNETHICAL! I FEEL VIOLATED!

Destroyed 16 roof tiles and basically said this what happens and it is your fault for not reading the contract. There a part of the contract that states if they cause any damage they are not responsible. The sales manager dodged our phones and everyone in charge is either out of the office or in a meeting. They were perfectly reachable until they got the money.

Service person was ok but dealing with the billing department has been a nightmare. I will NEVER use them again.

our service person is great, calls the day before she comes each time to see if we need anything special or if there are any problems. has to be the best company of its type around.