BBB Rating
A+
BBB Rating and Accreditation information may be delayed up to a week.
Hours
Regular Hours
Services/Products
Brands
apple, microsoft, upgrades
Other Link 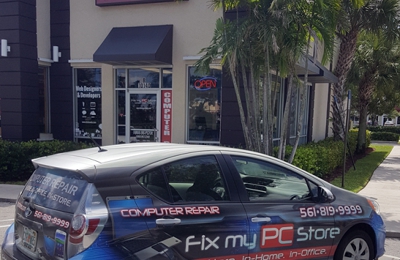 Brandon helped me he was super nice and very professional. I could not have gotten my computer fixed anywhere else for the same price he charged me! Other companys are out to charge you an arm and leg for these kinds of services. My Computer was fixed and ready within a few hours at an awsome price. It works like brand new!

I got my laptop screen fixed here & the guys were very helpful and sweet. it was all done in a very timely manner and it was the best price in the area !! I would highly recommend Andrew & Bryan and the boys to anyone who needs computer stuff :)

Best professional services at the very best prices! Saturday night at 6pm,an hour after they closed, my computer locked up after installing new security software. Needing to work on my lesson plans for South University this weekend, I was in dire need of fast expert repair services. I left one phone message with FIX MY PC STORE and Brian called me within 1 hour and was then at my home within 1 more hour to fix all of my computer problems AND set up 3 of my computers on a new router I had just purchased, and all within less than 1 hour! I have been in the computer field all my life and a college professor for over 18 years, but when I needed expert level help, this place saved the day for just 1 hour at their low hourly rate without any extra charge for the emergency hours home visit - I am most impressed with their expertise, their low rates, and their amazing responsiveness in resolving my emergency. These guys are for real - superior expertise, the best professional service, amazing responsiveness, and low low prices! Add their phone number to your A-LIST for your next need for the very best computer repairs and computer expertise obtainable. When you call these folks, you will be very glad you did!

We have utilized Fix My PC Store several times over the past year and have found their technicians to consistently provide excellent set-up, diagnostic, trouble-shooting and repair service for both our home and business laptops and computers. From friendly and efficient telephone contact to remote siting capabilities to punctual and competent on-site service and repair, these guys know their business and do it better than anyone in town. We love knowing their extensive skill set is only a phone call away and would not hesitate to recommend Fix My PC Store to our friends and colleagues in need of computer support services performed with integrity, professionalism and at a fair price point. Highly recommended.

I am new to the area, I moved from Kansas to West Palm Beach a year ago. I recently began having computer issues with my desktop computer, and I became frustrated, so I asked my friends for help, no one could figure out what the heck was wrong with my computer. I decided to go to Best Buy and inquire about computer repair, the prices quoted to me by the techs at Best Buy were a lot more money than I was willing to spend, so I looked up various local computer repair shops via the Yellow Pages and I saw an ad for Fix My PC Store, which was VERY close by, so I called them, the person who answered the phone was very nice and knowledgable, and told me that I could either bring the computer to the store and have the instore techs fix it, or a tech could be sent to my house at my convienience, I chose to have a tech come to my house. I made the appointment and on the schedule day right on time, the tech was knocking on my door, I was shocked, since when does ANY tech/repair person arrive on time? I was impressed, I opened the door, the lovely man introduced himself as Andrew I took him into my computer room, explained to him my issue(the computer kept taking too long to lstart up and then would randomly crash), and he went to work. About 45 min later, he told me my hard drive crashed and that I needed a new one(just my luck) and he also told me he could go get a hard drive and intall it for me, I thought that was wonderful, my computer was going to be working, again, very soon, so I told him to do what he needed to do, so Andrew left, he came back less than 30 min later with a new hard drive, installed it for me, made sure everything was working properly before leaving. He only charged me for the time he spent at my home working on my computer, he did not charge me for the time it took him to go out and get a hard drive. He also told me if I had any questions or any other issues, I could always come into the store and speak with any of the techs or I could call on the phone. Every since Andrew had fixed my computer, I have had no other issue with it. I have recommended Fix My PC Store to everyone I know, Thank you to all the techs at Fix My PC Store, I appreciate your help. Keep up the excellent work.

I called these guys based on the two reviews above. Not only could they not fix my problem, but when I had asked why it was taking so long they became very rude.

They ended up leaving saying that they needed to wipe out the computer in order to fix it. My son ended up fixing it in only 15 minutes later on that day after they spent nearly 3 hours on it. Oh yea, they wanted to charge me close to 300.00.

We do not have any records relating to this incident. If indeed you are a factual customer with a complaint and not a compitator trying to foil our name please contact us so we can resolve this issue.

This listing has been claimed by a business representative.
Helpful(0)ShareFlag
taheena

I went to best buy and they were asking a lot of $$$ to remove viruses from my laptop. I found these guys online and drop off my laptop and got it back the same day for far less then best buy was charging. They also put some software on to help prevent getting viruses again.

Great customer service and lively store. I decided to try these guys because my computer guy took a week to return my call. Not only was everyone helpful but very knowledgeable. I had my computer fix and back in business in one day.