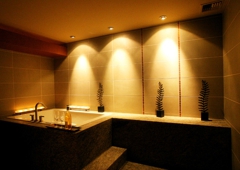 After a wonderful Thanksgiving Buffet experience several years ago, we decided to go again with the family for Thanksgiving 2011.

> nice drive out from Portland

> the wait staff was pleasant.

> the food is pretty good

> the price is pretty decent too. Two parents that qualify for the ""55 and over"" senior rate, and 11 year old and a 15 year old, cost $96. That includes gratuities, and no extra alcoholic beverages.

> Mystery food!!! None of the food was labeled, and on a number of items you could not tell what was in the pan or on the platter by looking at it.

1) No turkey? ""Turkey"" was served in a buffet pan. I had to ask where it was to find it. It looked a lot like the thing in the pan next to it, which I think was some kind of mystery fish. I'm used to seeing the bird carved. Disappointed.

2) No pumpkin pie? Actually there was some, but you had to work hard to find it. It was served in little tartlet shells, and covered with whipped cream, so you could not tell what it was. I tried 3 different deserts in hopes that one of them was pumpkin pie, before I discovered it. The kids gave up on pumpkin pie. I would have liked a real wedge of pie, and some other pie choices too. Disappointed again.

> ""free"" champagne and mimosas? Yes, but there was no one around to refill your glass, so we didn't get hardly any. Its not ""free"" if they don't serve it to you.

> poor service. For most of the time we were there we only saw busboys in the dining area.

Would I go again? Maybe, but it wouldn't be very high on my list of choices. Who-ever runs this restaurant is not on top of the operations or doesn't care.

The customer service at this place SUCKS! I wish I would have read the reviews before purchasing a nights stay. I agree with the bait and switch for a higher price. DO NOT stay here!!

My husband and I chose to have our wedding at the Resort at the Mountain on February 12th, 2011. They gave us a ""free"" room for our wedding suite, which will now cost us about $2,000. When we originally booked it for our wedding we were told that we would be able to set up the night before so that we wouldn't be rushing the day of the wedding. About a week before we were told that there was a group using the room the night before and day of. The ceremony and reception turned out to be beautiful. The food was really good except that the Resort had changed the menu without tell us. After the reception my Husband and I returned to our room. When we woke up in the morning to go snowboarding, I noticed my computer wasn't in the room. Unfortunately while we were at the wedding someone had broke into our room and stolen my computer, my real pearl necklace, some cash and gift cards, and one of my photographers cameras. They had also taken my Kindle but that was found in the parking lot by another guest. I was hysterical; I am a graphic designer so without my computer I can't work. I also had several projects on there and 2-3 years of photos that I will never get back. We filed a police report and a complaint against the Resort. The General Manger Frank is a jerk. He was extremely rude and unprofessional to my husband. I don't know who put him in charge but he should be fired for how he has acted. The Resort received at least $15,000 from our wedding but they will not take any responsibility for not having security and my stuff being stolen, they haven't even said I'm sorry. If you want your belongings stolen then you should stay at the Resort. Our story has spread in Oregon and I hope that I can save someone from making the mistake of losing valuables by staying there.

My family made reservations for a Villa at The Resort for a family reunion with our new baby. We booked a larger combined room for the occasion over a week in advance, paid in full. We confirmed the reservation 2 hours before arriving but when we did arrived, we learned that our room had been sold to someone else. The management gave several inconsistent stories about why they gave the room away, none of which was convincing. We did stay in separate rooms, but the all the food we bought for use in the kitchen went to waste. What a disappointment!

I will never book accomodations at The Resort again. I choose not to do business with unethical management that at will double book rooms and take pre-payment only to swap accomodations at the last second.

Bait and switch scam at its best!

I have deemed one day every other week for golf and relaxation in an awesome setting. My course of choice is the resort at the mountain. Three beautiful nines of golf in an unhurried atmosphere with friendly staff and greenskeepers. The course requires intelligent management but does not play too tough to affect your happy factor negatively. Only slight drawback is the 50 minute drive but once you arrive it does not really matter. Food is awesome at the pub and should be included in your day at the resort. Try the prime rib sandwich!

Awesome experience, played unlimited golf for $50 and a cart mid-week. Treated right by everyone I came in contact with the asst. pro, greenskeepers and the waitress who served us tasty fish & chips underneath huge shade trees overlooking the valley and the course. The course itself is in great shape and although not long, course management and positioning plays a large part in scoring well. Come up and enjoy it but do not tell anyone whom might ruin this tranquil place for the rest of us!

and this is absolutely the best ""all around"" golf experience you can have. 3 courses. All nestled at the base of the Cascade Mountains. All in perfect condition. Literally! They don't hurry you around the course or make you hit into the group in from of you. The mowers ALWAYS stop and turn off the motors when even remotely near a golfer. The restaurant has great good. And, they have a package price for ""unlimited golf."" So take a day off and spend the entire day at the Resort...you will not regret it.