General Info
Let Maaco Collision Repair & Auto Painting, turn the car you drive back into the car you love. As America’s #1 bodyshop, Maaco Collision Repair & Auto Painting are the experts in accident damage, dents, dings and faded paint repairing more than 20 million vehicles nationwide. Our expertly-trained technicians will make handling your insurance claims and accident repair easy by providing quality repairs you can trust with a nationwide warranty. We work with all automotive insurance companies to make the process easy, affordable and reliable from start to finish. We meet a strict repair standard at a value and quality other collision repair shops can’t provide. Call Maaco today to schedule your free estimate.
Hours
Regular Hours
Services/Products
Brands
Maaco
Payment method
all major credit cards
Neighborhood
Bayside
Amenities
Collision Services - We will assess the damaged area; recommending either repair or replacement of damaged parts and components, depending on what is the most cost effective for you. We will also repair areas where it is more cost effective to retain the original equipment; damage such as dents, dings, scratches and plastic and fiber glass repair. Insurance Claims - Depending on the amount of damage your car has and the cost of your deductible, you may save by paying out-of-pocket for repairs. If you're making a claim through your insurance company, you'll be happy to know that Maaco works with every major insurance carrier. We'll coordinate with the insurance companies involved, schedule an appointment for your car to be inspected, and even find you a rental car while we make your repairs. We use original manufacturer parts, factory specs, and precision assembly to expertly rebuild your car so it looks and drives like it did before the accident. Fleet & Industrial Services - Our clients benefit from a national footprint, corporate oversight, simple production model with faster turnaround, customized programs for special project needs, and a national warranty. Fleets of all sizes trust Maaco's reputation for craftsmanship, speed and economy. Maaco stands behind its work 100%, there are no management fees, and with centers coast-to-coast, there's always a Maaco facility close by.
Other Links 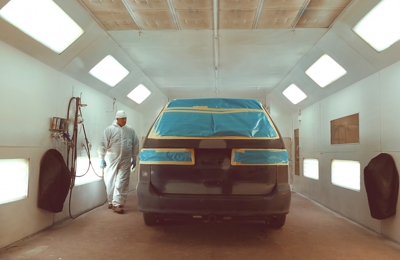 Great job on my classic car paint job. I also had some bodywork that had to be done! I now have my car ready for the next car show!! Thank you Peter and Sean! Your customer service was excellent! I will use you again on one of my other autos!

Thank you for visiting our reviews page; you may be questioning the quality of our work because of something you read here. We are a family owned and operated business who takes pride in doing quality repairs and paint services at a fair price. As the owner of the business, I invite you, personally, to come and see the quality we produce. I know you will like what you see! We are open Monday-Friday from 8am-6pm, and Saturdays from 9am-12pm for estimates. Please feel free to ask for Peter or Sean when you come in.

Everything that happened to nfl3125 we too went threw. My Husband and I took out 2003 Honda Civic in to get a new paint job done because the original had started to wear thin and flake. Sean was also the person we first dealt with and was told the same thing right down to he was giving us a discount. We were never told that there are levels of sanding that can be done, we weren't told about a sealer that we can have put on the car to keep old problems from bleeding thew and into the new paint job, we weren't told that the jams would not be done, and when asked if with the warranty the car could be taken to any Maaco they said yes. (never mentioning that there is a 50 mile clause in there) We didn't find any of this out until after the paint job was done. We picked up the car and it was also covered in dust, there was a bunch of over spray on the lights, they pained over the key holes on the doors. When they did sand or buff the car they went over the head lights, tail lights, and chrome on the front of the car. It had bubbles galore all over it. We then talked to the owner that location and he said oh no worries bring it back in 3-4 weeks and we will de nib it and she will look great. We went ok, we had never had a car painted before so we just went with it. We took it back after 4 weeks of letting the paint cure and when we got it back again it was covered in dust even though they cleaned it. I had to ask for a cloth to wipe it down because I already had a bad feeling about it, the feeling was right, there was still a lot of pitting, there was damage done to a sprayer nozzle, there was a new gouge in the back bumper and more. I was pissed! I snapped after seeing all the damages done in total to the car and after dealing with Sean again and him saying on there wasn't anything else that can be done and that they didn't do anything I asked for the owner who I snapped on since he was the one who promised that everything would be great when it was all done. While pointing to the car asked the owner what the F**** is this, he stormed off saying how he doesn't need to be attacked. What a joke that guy is. Now granted I shouldn't have used foul language but in that moment seeing dollar signs flying out the door and thinking we paint 1k for this I really did lose it and said the first thing that came into my head. Last I knew asking a question even with a swear word in it wasn't attacking a person. Just to get the car somewhat fixed back up is going to be almost 400 dollars and that is to touch up the pain job they screwed up along with the nozzle they broke. That doesn't include the cost to get the chrome fixed or replaced or the head lights or tail lights. In all we will probably end up spending close to fix the car as what we were charged to paint it. Oh and don't bother with their corporate office, those guys are a joke as well all they say is there isn't anything they can do because each Maaco is privately owned! Do yourself a favor and stay as far away from this one as you can!

I took my vehicle to Maaco Auto Painting at 1321 Diamond Springs Road, Virginia Beach Virginia early this fall. The sales person, by the name of Sean, promised me quality body work and a factory finish paint job. I paid the full price of $700 for one of the best paint jobs offered by Maaco (Sean claimed to have given me a discount). They had my car ready for me a week later. When I picked it up it actually looked pretty good, but I notice a thin layer of dust that covered my car and a couple of cars parked next to it. I found this unusual because when I picked up cars in the past from recently having body and paint work done on them