Your satisfaction is our first priority - Serving Men and Women

General Info
﻿Reasonable Prices - Free French Manicure with Full Set - Open Monday Through Saturday... No Appointment Necessary. Sundays Open for Appointments Call in Advance.Pro nails has been in business since been in business since 1998, we are a family owned and operated business. We were honored to receive the reader's choice BEST OF VENTURA COUNTY Award for Best Nail Salon in Town! We invite you to call us for an appointment or walk-in for any of our services. If you cannot come to us, we come to you as an In Home Party Service (5 persons or more)
Email
Email Business
Services/Products
Acylic Silkwrap Gel Polish Pind & White Manicure Spa Pedicure Paraffin Wax Hot oil treatment 3, 4 D Nail Arts Lips Eye Brows Facials Waxing
Payment method
carte blanche
Location
Between Seaward & Loma Vista. At the Corner of Evergreen and Main.
Amenities
Happy Hours special Every day we offer From noon to 3 pm Only 20.99 for Spa Pedicure
Other Link 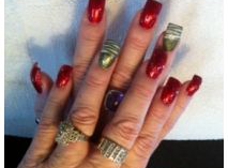 This is my favorite place to get my piggies painted. The staff here is always super friendly and professional. They also have a great collection of colors. I've been coming here on and off for about 2 or 3 years and there is nowhere else around here that compares with the quality and consistency I've experienced here.

I have been coming here for about 10 years after trying many others in the area. I'm a perfectionist. My nails are always done perfectly, cheerfully, and in a friendly atmosphere. I could not recommend the work of Ann and Johnny more highly!

I Love Pro Nails! Everyone is very friendly and accomodating. The prices are good and they accept credit cards. A wonderful place for all pedicure and manicure needs. They do a great job!

I have been going to Pro Nails for over two years now. The prices are very reasonable and on top of that, they do an amazing job!!! Best nail place I have been to in over 12 years :)

I've been pleased with what I see at this salon.. I've been to many others, and in my opinion, this is the best in the county. I see them everywhere, from ads, to my friends telling me about them, i just had to go to them. The first time was a great experience. They are quick and friendly. I would definitely come back!

I've recently moved here from Orange County and I was looking around to see if there were any nail places that could do a well balanced job. I came across Pro-Nails in an ad in Ventura County and I decided to check it out. When I first walked in it was nice and clean and they had friendly service. I would definetly come back for a second round.

Oh please, you guys are just overreacting. I've been coming here for 13 years now, ever since they first opened and they never failed to deny my request. I'm guessing their prices went up because all the expenses of the business went up. When you first walk in, look at the price list, if you don't see what you're exactly looking for, please feel free to look for another shop. Ann &amp;amp; Johnny don't need any negativity at the salon. They already have so much to handle already. Maybe that day you came in, it was so busy that she forgot to punch the card because everytime I came in, she would remind me or give me an extra one if she forgot. All I know is that they'll be happy to do anything for you, and i mean ANYTHING to help you feel relaxed and in a good environment. In my opinion, the terrific owners never left. You have loss some amazing nail artists. &amp;amp; I just want to put out there that I'm sure Ann and Johnny are always welcoming new customers with open-arms!

Their excellent customer service declined around 2005 or 2006. It was shortly after they received the Ventura award for being nominated the best. One would think that you would take steps to retain that title. Ya think?

I had been going to Pro Nails for quite some time and always had the same services provided. One day, they charged me about $2.00 more. I asked about the increase and they said, oh, our prices just went up. That's fine, but advise me BEFORE you provide the services. I may have declined that day. They don't know how much &amp;amp;quot;extra&amp;amp;quot; I have to spend.

I also gave them the benefit of the doubt when my nails were than professional more than once. Yes, everyone has a bad day, but acknowlede that when brought to your attention. But, they never did. Instead, an attitude that was totally unjustified. The cards that they use to punch? Oh yes! Again, CRM is correct. They would NEVER, and I mean NEVER remind you to punch your card. When asked if they would punch it twice next time, they really were annoyed.

Most of their customers did come from referrals. If you were a long time customer and a new one walked in, the services you were having done were done quickly and unprofessionally. I must add that I was a VERY good tipper. I left Pro Nails for about 2 years. When I decided to give it another try, I called to make an appt. I was appalled when I called and there was no acknowledgment from Ann that she even knew who the hell I was. I expected a little more excitement from an owner that a returning customer was calling.

I could go on but it truly saddens me too much. When you must find another place to have your nails and toes done after patronizing a salon for so long, it's kind of a bitter/sweet situation. You feel so used, yet, still want the best for them.

Ann and Johnny, as much as this review may be hurtful to you, I guarantee it hurts your loyal and dedicated customers much more to have to leave you for many reasons not even mentioned.

What happened to the terrific owners? I'm so sad.

My sincere best wishes for your success -

Not only did I go to Pro Nails, I use to recommend their place all of the time.

The owners were always very nice and they never failed to give me excellent service. It started about two years ago (2006) when I felt as though my business was being taken for granted and no longer appreciated. Their services (mainly nails and pedicures) seemed to be on a decline.

I didn't think much about it the first time my nails were not done in the usual &quot;professional&quot; manner. After all, everyone has a bad day. But, after the second and third visit I decided to politely ask if they could clean around/touch up the nails like the use to. My request (which shouldn't have had to be asked anyways) was obviously a bother for them.

Pro Nails always had punch cards and when the card was filled (10 boxes stamped), you would receive $10 or $15 off the next visit - I don't remember. That's great if you remember to ask them to stamp it. If you don't, they will not remind you either. If you ask to have it stamped twice on your next visit - to make up for the visit before - they may or may not stamp your card. If they do, they don't take to kindly to giving what is, by all accounts, due to the customer.

The primary reason I stayed with them so long was because of their outstanding and friendly service. I was sad to have to find another nail salon to do business with. Maybe if you are a FIRST TIME CUSTOMER the service and attention to detail may very well be an excellent experience for you. For me though - I have no intentions of returning to Pro Nails. However, I do wish them well.