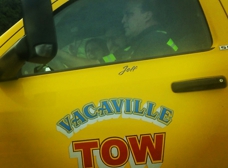 Gave us a quote for $90.00 so we asked is there a better price they said it was the flat rate with all Tow companies in Vacaville, so we called North Bay Tow and they quoted us $65.00. Seems like they are pretty dishonest.

My wife and I were exiting Gold Hill road in Fairfield, CA merging onto HWY 680 and it was a clear merge, I saw this tow truck coming from afar that it was safe to merge, also given the short merging lane, I had to take the exit. Then suddenly this driver deliberately sped up to cut us and almost made us go beyond the shoulder ramp into the ditch. My wife and I could have been into a serious accident. We managed to catch up and took pictures (mind you they were taunting us in the pictures, wish I cold post it here) of the towing truck plate number 62260A1 and called in a complaint to their office but never heard back from a manager... This happened at 4:45PM on 28Feb2016.

I just realized how it would suck to die in an accident in your home station caused by the people you swore an oath to serve, than dying on a military deployment.

Excellent, prompt, courteous. I was met by Hector with a nice cold bottle of water to start with and then he promptly "repaired" my vehicle and I was on my way! My car still runs great!