Try us once and you will truly appreciate our high dedication to customer service.

General Info
We pride ourselves on providing Quality Workmanship at Affordable Prices. Advanced Muffler has happy customers throughout the world! We service all foreign and domestic cars, usually while you wait. Whether you are looking for top-of-the-line high-performance mufflers or a cheap muffler or anything in between, we’ve got great choices for your car or truck. We are the ultimate shopping destination for your performance muffler needs! Visit us today or give us a call. We repair and replace damaged exhaust systems, which includes mufflers, pipes, catalytic converters, and tips. Also we offer custom exhaust work and high-performance accessories for your vehicle or R.V. Advanced Muffler will help you achieve that look and sound that you want from your car, and with most of our bays reserved for exhaust work you and your car will be in and out as quickly as possible
BBB Rating
A+
BBB Rating and Accreditation information may be delayed up to a week.
Hours
Regular Hours
Brands
Flowmaster, Magnaflow, Magnaflow Performance
Payment method
visa, mastercard, amex, discover, all major credit cards
Other Links 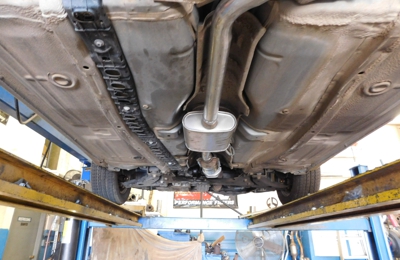 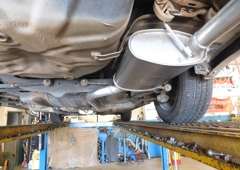 I’m “ganging up” with the rest of these reviewers in and giving Advanced Muffler of Vacaville the highest possible rating. First, this place was open on a Saturday which is getting rarer these days, especially in the “Living for the weekend” style of California businesses. I didn’t choose Advanced until I shopped around and found this shop’s prices to be the best. Next, I researched the quality and reputation of shops to get the best quality as well. I found both at Advanced Muffler. For Saturday, it was by appointment which he kept despite a customer who had a problem car requiring longer work than expected. I was impressed that he didn’t charge the customer additional labor considering the additional work was from, less than exact info before the project was started. Apparently, the customer brought in a DIY car, which is fine unless the DYI is on the emissions portion of the exhaust. He got my car lifted up and started the replacement of the entire system. He advised that it didn’t seem necessary, but I wanted to anyway as it was 21 years old. He finished this sooner than I expected. I was gambling that the old exhaust was the culprit for some rattling I’ve been hearing. It turns out however, that the noise is still there and may be caused by worn motor mounts. He pointed out that there is a very slight vibration which indicates this. I always figured this to be normal as my big block Mopar’s have more pronounced vibrations, especially, the one with the solid motor mount on one side. I’m tired of replacing the standard one that can’t withstand the increased HP and Torque. Anyway, I was thoroughly impressed with his work and excited to get to the mechanic he suggested for the motor mount work. I left and returned to tell him that I found the shop he suggested but it was closed. And, he found my credit card that I left behind. Honesty, value, competence, and quality. That’s enough for my return business. I wonder if he ever considered car sales? From what I read, this area could use the same high business ethics the owner of Advanced Muffler has.