General Info
Maaco Auto Body & Painting is North America's #1 body shop. Maaco Tucson located at 3550 South Palo Verde Road repairs accident damage, dents, and faded paint for drivers across Arizona, restoring the safety and beauty of all types of vehicles. Let Maaco transform your car with a new coat of paint and soon you'll be driving the car you always wanted. Maaco expertly does away with dents, dings, and accident damage. Our standards are simple: repair cars so expertly no one can tell they were ever in an accident. We guarantee our auto body repair and car painting work. Visit Maaco Tucson for your auto body repair and car painting needs.
Payment method
master card, visa
Neighborhood
Tucson Broadbent Business Park
AKA 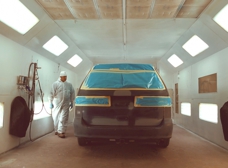 Took a car we had for a while to give it a fresh look so our daughter could have a car to drive. They provided us an estimate to repair some dents here and there and a quote for a mid/upper end quality job, not the cheap basic paint job. Estimate was around $800. Dropped the car off , few days later they called and said it was ready to be picked up.

When we arrived to look at the car, It looked like some 5 grader had taped the car up, paint was all over the areas that should not have had paint on them, black trims, chrome...etc. There solution to this was a BLACK MARKER PEN!

Also, no Dents were repaired, but rather painted over and when the owner was asked to come out of hiding to explain why the dents were not repaired he answered we did repair some but we must have missed a few! What a load of BS!

Paint quality is Waaaay below average, car does not shine despite the waxing job it was given 45 days later with their instructions not to do anything with the paint within 30 days.

Car looks really bad, and has taken the pleasure out of owning it due to low quality work.

I will admit, more than one person and our mechanic reccomended we do not have Maaco do the work, we did not listen thinking that a big company name would for sure provide quality work! WRONG!

I REPEAT DO NOT GO THERE!

I AM ONLY GIVING IT A ONE STAR BECAUSE THIS SITE DOES NOT ALLOW YOU TO POST WITHOUT A RATING! IN MY OPINION THEY ARE IN THE MINUS!

My husband and myself were in search of a place in town to get his car repainted and a few dents taken out. (He had just bought it as a project car) Maaco was suggested to us as a, 'good company that does really good work.' We headed over there, paid for both a paint job and to get the dents removed, and a few days later we dropped the car off. Only a few days after we were told it wasn't completely dry but it was done and we could pick it up in the morning, so we did. First thing I noticed was that the dents they were suppose to remove were still visible, even under the new paint job. When we got home, and looked closer at the car we noticed something else. Before we got it painted we had done a complete engine rebuild. The car itself is a '92, so the engine was pretty dirty and old. The parts that were not replaced were taken out and shined. The entire engine was brand new looking. When we got it back it was covered in overspray. The black vents on the front of the car were oversprayed (and the edge of the white paint at the edges of the vents were sticking up). All of the black rubbers on the car (roof, doors, etc) were oversprayed. Even inside the doors and the window glass was oversprayed. I don't know if they just didn't tape and cover very well, but they didn't bother to even attempt to clean any of it. They suggested a product to remove the overspray, however it ended up removing paint period.... That was around 4 months or so ago. A few days ago my husband ordered a new set of the rubber stripes that fit along the car door (sorry don't know what they are called), and as they arrived yesterday he went to put them on. This morning one of them was slightly crooked so he went to take it off to line it up better and a huge chunk of paint came off, then another, and another. At this point the entire area under that stripe is gone as the paint peeled off in big chunks. I asked him if paint is suppose to come off that easy, as i'm not the kindest to my own car and have never had paint come off. He showed me other areas on the car were the paint is already peeling away. And the areas were large portions have come off you can clearly see the old paint right there, absolutely no primer in between... All-in-all we will NOT be taking any of our other cars to Maaco, nor will I ever suggest them to anyone. We are now in the process of finding somewhere else to fix the paint, again.

My personal experience with paint and body work at MAACO on S. Palo Verde:

Took my auto for a paint job. Personnel pointed out dents that should be repaired to which I agreed. Out of 6 dents, 2 were repaired, 2 were not, and 2 had very shoddy repair work. They charged me for all and put the burden on me to prove that the bad repairs were actually done by them!

If you're going to take your car there (or to any body shop for that matter), make sure to get proper documentation. Take the time to take photos of the work to be done, and see that they also describe it specifically in their paperwork. I blame myself for assuming they were honest, and ethical. I should have been more skeptical when another customer walked in during my initial estimate visit regarding shoddy work on their car!