General Info
Brandon Volkswagen is a full-service dealership that offers new and pre-owned vehicles. Its Volkswagen models include the Rabbit, Routan, Tiguan and GTI. The dealership provides oil change and brake inspection, as well as repair services for cooling systems, fuel and air filters, shocks and spark plugs. Brandon Volkswagen also offers parts and accessories of various vehicles. The dealership provides scheduled test-drive options. In addition, it offers warranty options. Brandon Volkswagen is located in Tampa, Fla.
BBB Rating
A+
BBB Rating and Accreditation information may be delayed up to a week.
BBB Accredited businesses follow the BBB Code of Business Practices and pay a fee for accreditation review and monitoring. Accreditation is not a BBB endorsement or evaluation of the business’ product quality or competency in performing services. 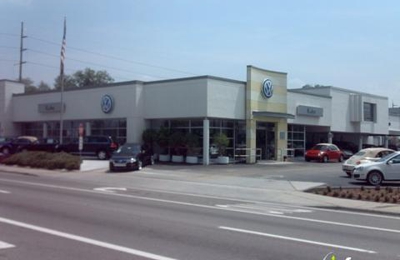 I have been in 3 seperate times with a pre approval in hand and ready to buy a car listed online for $11,200. I kept getting ridiculous quotes, twice I was quoted at $18,000 out the door. One guy told me the online price was for a lease only, when I was looking for a Certified Pre-Owned with 30,000 miles? I don’t think so. They treated my boyfriend and I like children as if we didn’t understand the buying process and just wanted to get as much money as they could from us, we were a piece of meat to them. I was hoping the third time would be the charm but I have completely given up on this VW Dealership. I will be sure to have my boyfriend tell everyone at McDill not to shop here as well as anyone I do business with at my Real Estate Office. Next time I’ll be sure to read the reviews, because apperantly this is a reaccuring theme

Part 1: My wife took her VW Jetta in to the Brandon Volkswagen Dealership to check out a taillight issue and have some simple recalls taken care of. I get a call from her that the car is on the lift and the estimated bill is $2500. I asked to speak to a mechanic, I ask him how much for the taillights? “We haven’t looked at the taillights yet.” My wife reads out the list of bogus charges: mysterious oil leaks, CV joint covers, bent tire rim, 4 new tires, and on and on. I tell the mechanic to take the car off the lift, fix the taillight and order a new rim (because we have noticed an odd vibration). I tell my wife to be ready for more classic high pressure gender-based sales tactics. Later she tells me that’s exactly what she experienced. The cost for 2 tires and a new wheel: $750+ dollars.

Part 2: I call my mechanic of 10 years (who hates VW’s) and ask him to order a wheel and two tires for the Jetta. He says he has to order them from the dealership. I don’t care, I want his business, not the shysters at VW. His cost for 2 tires and a new wheel: $350. I email VW Central about my wife’s experience with VW. VW rotated the tires (made a big point to tell my wife they did this as a free service). The car drives horribly now –there’s a thumping under the driver’s side tire –we assume they have moved the dented rim to the front and are feeling the effects.

Part2.1: I get a nice response from VW central about how they will look into it and they care very much. I get a bored call (on my answering machine) from the dealership that does not reference my wife’s unpleasant experience. I email VW Central saying I do not want to deal with the dealership –why would I? I want to deal with VW Central. I have not asked for anything at this point. I cancel the tire order at VW.

Part 3 (things start to get a little weird): I pull into my mechanics with the wife’s Jetta. While the car is in the parking lot my mechanic asks me why the spare is on. I have no idea. We didn’t put the spare on. Come to find out VW sends my mechanic the wrong wheel (wow), so we have to figure out just how bad the dent is (understand, that thumping we are feeling when we drive is SEVERE). Here’s where things gets weird: the tire VW put in the trunk (where the spare was) is fine, actually the best tire of the 4. (??), the tire with the dented rim is still in the rear –now on the other side. My mechanic tells me that the dent isn’t that bad, I shouldn’t be able to feel it when we drive. The driver’s side tire has a massive wear spot on it, as big as my hand and deep –my entire (large) hand fits into the depression of this wear spot. So, they took off a perfectly good tire, put on the spare, moved the bad tire that was ready to blow at any moment under the driver’s side –all, in my opinion, to give credit to the lie that we needed a new wheel, a wheel that we actually did not need.

Car runs fine (it has been over a week now)

Part 4: After the initial response from VW I have heard nothing from them. I sent another Customer Service request through their system referencing my first request. Nothing. Also keep in mind, I never asked for anything. Not once. Fine, I’ll get the message out about Brandon VW in other ways.

Both Mike and MJ are great professionals. I highly recommend Brandon VW to anyone and everyone! Thanks!

I have been a customer for approximately five years now. Julie has been my rep for approximately 2 to 3 years! She is always, always, friendly, accommodating and knowledgble. She is ALWAYS professional and makes sure i leave their fully satisfied! She is the BEST!!!!

This is my first VW experience, and your facility has been excellent. I have already recommended you to a friend.

Time after time Julie is a person that always is there to help the customer. I have yet to have any problem with service at Brandon VW!

MJ our salesman did a outstanding job showing me all the models and even let me test drive each one of them..Jef also did a AMAZING job getting my payments to where I needed them to be!

I wouldn't take my car anywhere else. Brandon VW feels welcoming and the gentleman, Darryl, that sold me my car always checks in with me regarding my satisfaction with my car when I am there to get it serviced and he is working.

Again Darrel Fowler took the time to ensure everything was done as promised and made sure I was satisfied with all the work performed. He was very professional and offered his assistance if needed for later. The person working at parts also took personal care to ensure the rack for the kayak would work for me.

Being a female I am always somewhat hesitant about taking my car in thinking I will be taken advantage of. Julie at the Brandon Dealership has always made me feel comfortable and that I will provided the best service.

As always, Lillian is a pleasure to work with. She is always knowledgable about my vehicle and works diligently to solve any problem I may have. She is a true asset to your organization.

Julie was a truly kind and caring person. I felt very confident and safe leaving my car with Brandon VW, and was very pleased when I picked it up. She was extremely helpful.

I feel like I am part of the Brandon VW family whenever I stop in to the service drive. Julie Yadao is always helpful and friendly. I have never had a dealership make me feel this way before! It is so nice to have a pleasant experience whenever I need service for my Jetta!

Julie and Lillian are the best! Everytime I take my vehicle in they are friendly, courteous, and most importantly, I trust them, which in turn means I trust that service department.

Brooks did a great job helping me with an issue with my 2010 Jetta TDI. I am very impressed with his demeanor and honesty.

Good experience, it was more of a friendly interaction instead of seller and buyer.

my advisor, Patrick, was very courteous and considerate of my time. And I appreciate that after the inspection, the car was washed. Thank you.Rose Batansky

I was able to get an appointment the same day I called. I was greeted by Brooks, a very helpful and knowledgeable employee, who explained what services would be best according to the cars mileage. Service was prompt and thorough and I was able to pick my car up before closing. Great service all around!

Luis is absolutely great. I've been there on two occasions for service and his attention to detail is second to none. Thank you, and keep up the good work Luis!

Lillian was awesome. She totally answered my questions and we resolved a wondering I'd had for a few weeks. She is a real asset, and I look forward to seeing her in several thousand miles!