Grand Dental Care has not yet specified accepted insurance plans.

Grand Dental Care has not yet specified any specialties.

General Info
Grand Dental Care, located in Sun City, Arizona, has been recognized as a top dental provider in Phoenix Magazine's Top Dentists issue. Our dental practice is dedicated to providing comprehensive and preventive dentistry in an anxiety-free environment. Our specialities include implants, cosmetic dentistry, orthodontics, pediatric dentistry, periodontics, and endodontics. Our state-of-the-art facility is well-versed in all the latest technology and procedures. Our advanced technology allows us to create a crown in just one day. Rather than referring patients out, we perform surgery and advanced procedures in our office, making us a great location for all your family's dentistry needs. Contact us via phone, email, or the form on our website to set up a dentist appointment. Developing long-lasting and trusting relationships with our patients is our top priority. We look forward to meeting you and becoming your dental provider for years to come.
Extra Phones 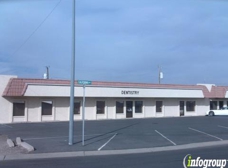 This year I had two crowns replaced (last two adjacent bottom right) that Dr. Wessel's female office assistant put in my mouth about 3-4 years ago. Dr. Wessel told me that this assistant (not a dentist), was very capable and walked out of the room. Within the month, I asked to come back into his office as the second from the last crown had a gap on the inside, between my gums and crown that was basically a pocket collecting food. When I came into the office and he checked it out he told me very defensively, borderline belligerent, that there was absolutely nothing wrong with the crown in question. He was very huffy. and acted like I didn't have an issue. I stupidly did not insist any further as the situation was rather intimidating. The next year I started with a new dentist in a new city, and after looking at my ex-rays that I brought with me from Dr. Wessel's office, she came into the room and the first thing she told me was that this same crown I had questioned, had a gap, was collecting food, and should be replaced. When I told her that I just had the crown replaced over a year ago, she told me to go back to this dentist's office and get it replaced as it was put on incorrectly. I told her I would never go back to him after the way he acted. So I flossed religiously, brushed my teeth twice a day and saved up $, as I knew this one crown needed to be replaced. This past year I had both crowns replaced as I had cavities under both molar crowns Dr. Wessel's asst, put in my mouth. Then, lo and behold, I just recently happened to mention to my dentist that Dr. Wessel did not put both crowns on, but his assistant did. My current dentist shook her head in disgust and told me this was not right, (she used the word "illegal") as the dentist is supposed to put on the crowns as it is his/her duty and responsibility to the patient. So a word to the wise, don't ever ever let any dentist con you into having an assistant put crowns in your mouth and advocate for yourself if something is wrong, even if the dentist acts belligerent just because he doesn't want to replace a crown. I have absolutely no respect for Dr. Wessel as a dentist, and finally had to tell my story so someone else can learn from what happened to me. Please note: one star for this dentist. I didn't want to give any but the system made me give a rating.

Their entire staff are very nice and nice. Without question, I'm thankful for the team here, & will be a long-term client for sure!