This location is now open! 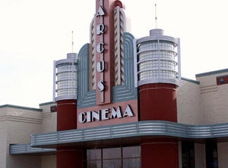 Great seats! Great screens and surround sound as well! I am a repeat customer and love that is is so close to home. ����

The renaissance is a beautiful theatre, but the sound is way too loud, I have learned to bring cotton to stick in my ears to filter the sound level, the first time I experienced this, i didn't have anything to put in my ears and I left, and my ears were actully ringing from the loud audio, no wonder there are so many hearing impaired people, be subjected to loud noice repeatedly damages the ear. Turn it down!

I hate it that there is only one theater left in Racine.With no competition Marcus can raise there ticket prices every year and that makes me more likely to watch movies at home on cable or online for free. And the staff should really try to curtail the unruly teens and disrespectful young adults who talk during the movies mostly on the weekends. Otherwise the Marcus is a great theater.

I've gotten so used to sticking to the theater floor that the Marcus Renaissance was a real surprise! The unexpected started in the lobby. The ticket booths lack the eye-sore, jail-cell appearance found in most theaters and are, instead, open & easy to access. The personnel manning the booths were pleasant, intelligent and able to comprehend what you've asked them. The lobby itself was quite attractive, with comfortable seating (i.e. normal loveseats & chairs) arranged to encourage chatting while you await the start of "your" show. There was even a baby grand (player) piano softly playing Christmas music! (I don't know if that's a normal amenity during off-holiday times.) The snack counter was average, easy to use with the usual munchies offered. The actual theater showing "my" movie was a couple of steps above the cleanliness level I've grown used to at most theaters. I didn't stick to the floor and there was nothing scary attached to the bottom of the seats visible from where I was sitting. While that might have been related to the fact that I went to the first showing of the day, my experience is that it's been sorely lacking at other facilities after the 1st week they've been open for business! All-in-all, even without adding the positive influence of a great movie, I'll definitely be switching to this Theater for any future movies!