...Because They Are More Than Just Pets 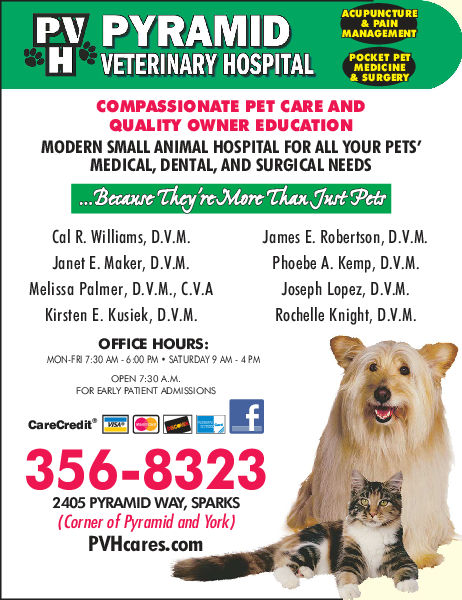 I've have gone there since Doug started the business.
He is a great man!
Friendly, Caring and a great Veterinarian!
And all his associates Cal, Janet, Claire, etc!
Are Fantastic!

Very professional and friendly staff! We have only received only excellent care for our pets through the years! Best vet practice in Sparks in my opinion!

I had a horrible experience there this past week. I have been a loyal customer for several years, but this week my Jack Russell Terrier of ten years was attacked by a Great Dane. I rushed them in and he was treated and sent home with me. A few days later he woke up very sick. I took him back in (dropped him off) and received a call that he required "some" of the dead skin removed in a surgical procedure. When I picked him up that evening, I found my dog literally sawed in half. Stitches that spanned around his back and belly. I was also told that the price was now going to be $150 more than I was quoted and asked if I could afford to put him in the emergency pet hospital. $1500 into the two surgeries, I told them that I couldn't afford the vet hospital but that I would stay up with him all night and take care of him. All week I had been asking, "Is there a chance he will be okay, because if not, we don't want him to suffer." Each time I was told that although my Jack was ten, they thought he would be okay. Well, to make a long story short, I stayed up with my best friend suffering all night. He had a seizure at 3:45 am and passed away a little after 9:30 am, right when I left his side for a moment. I am at a complete loss. Was I taken for a ride so they could have more money? Yes, and in the end, my dog spent his final hours suffering. I will never forgive myself.

I wish my doctor was as good as my Dog's! My dog recently hurt his knee, ironically I had a similar injury a few years ago. The vets at Pyramid imediatly were able to take Xrays and diagnose the problem in no time. It took me an entire day to get that done and I was pointing at where it hurt. Once the doctors determined what was wrong they sat down with me and explained everything in great detail. The doctors explained the X-rays drew pictures and let me know all of my options and gave me their honest assesments of each treatment. I think I learned more from my visit than I did in my highschool biology class.

My dog is doing great now and I will never take him anyplace else!

I have lived in Reno my entire life and would never consiter taking my pets to any other Veterinary hospital. The doctors and employees of pyramid have known my dog Srappy since he was just a puppy and treat him as if he were their own. The most important thing to me is knowing that when I leave Scrappy he will be in good hands. I could not imagine how I would feel if something happened to him and I knew that I had chosen a different hospital just to save a few dollars. With Pyramid I have complete confidence that they do everything in their power not to just make sure Scrappy is healthy but also to make sure he's happy.

My dog actually likes going to the vet, and that pretty much sums it up!

I've read the below post. . . and I've used the 'cheap' hospitals in town. . . and I got really cheap service. When I walked in the doctor immediatly introduced himself to my pet, got down on their level and started talking to her as if it was there own. The shocking part of my visit was a couple days after I left. The bill was paid, the animals had no follow-ups scheduled and I got a call from the doctor, "I wanted to see how Mila was doing?" - - I had some questions and he spent 30 minutes with me on the phone. I can't even recall when my family doctor's done that. (they never have!).

I was referred to Pyramid Vet hospital by my daughters principal who said they saved her dogs life after being hit by a car. - - I trust them 10 fold.

I have been a Reno resident for 30 years and have used different vets. This office is one of the most expensive in town. They did not get permission to use treatments on our dog and then expected us to pay for them. This office will not work with you on payments so unless you have a lot of extra cash, don't use them.

I appreciate your letting us know that you were dissatisfied with your veterinary visit. That is never our intention and good communication is always our goal. As doctors, we do our best to provide the best medicine to your pet that we possibly can. Unfortunately, I am not aware of any veterinary clinics who provide billing options, and we do offer several different payment options to pay your bill including applications through GE bank for a Care Credit card. Again, we regret that you had a bad experience and I appreciate you bringing this to my attention as we can use it to better ourselves in the future.

This listing has been claimed by a business representative.
Helpful(0)Flag
ladyluck216

They have given exceptional service for both our dogs. The front staff is friendly and quick to help. The vets are very knowledgable and take the time to listen.