General Info
Towing 24 hours a day; 7 days a week.
Email
southwesttrans@cableone.net
BBB Rating
A+
BBB Rating and Accreditation information may be delayed up to a week.
Extra Phones 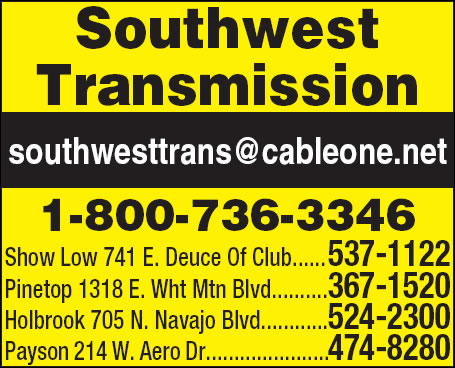 Because of the way they handled that repair, I now use them on all of my company trucks and I've been very pleased for the last three years. Honesty, Integrity, Professionalism and Courtesy. It doesn't get any better.

*MUST READ REVIEW*
Last year I called SWT in Show Low, & presented Russ w/my issue. I needed a tranny rebuilt ASAP. I called on Thurs, needed the rebuild before the following Thurs. Russ & team made good on their promise by having it done B4 the following Thursday, they even picked it up, & our spring break vaca went off w/out a hitch. I also sent in my sons p/u for a rebuild by none other, Russ & crew. My sons truck was done a couple days into our vaca. Now to my story...The tranny in my sons truck went out after the 1 yr warranty. SWT gives 1 year warranty on rebuilds, but also offers 2 yr warranty, I did not purchase. I contacted Russ & this amazing businessman/gentleman warrantied my sons tranny, FREE OF CHARGE! If curious, the tranny cooler clogged & melted the innards of the 1st tranny rebuild. Russ installed a separate cooler/fan for the new rebuilt tranny & also didn't charge me/my son for it. Bottom line........I HIGHLY RECOMMEND SWT/Russ in Show Low, Az..Amazing service!

I had SW Transmission in Payson put a new transmission in my Lexus RX300. It started acting up at less than 18,000 in 15 months miles but since I took it to a transmission shop at about 18,500 miles (sine I live in Montana) they won't honor the 18 month/18,000 mile warranty. I recommend that you go somewhere else where they stand behind their work. Most reputable shops will offer a 24 month/ 24,000 mile warranty.

Heading east on 31DEC on I-40 for a New Year's Eve celebration, where I was going to ask my then-girlfriend/now-wife to marry me, I broke down in Holbrook, AZ. Transmission would only operate in 2nd gear. It had 250,000 miles, so I knew it was probably shot. The shop in Holbrook said they could drop the transmission to diagnose the problem, but couldn’t fix it until 02JAN, the first day they could get the parts from the main shop in Show Low…but, if I could limp and creep over to Show Low, there still might be time to get me on the road in time to make the party….so I did. The guys in Show Low dropped the transmisson, pronounced it in good shape (except for the problem: a burned-out internal electrical component), fixed it, handed me a bill that astounded me for the low price considering the work done (and I’m a Scotsman!), and I was on my way by 1530!....AND I made it to the party (and the proposal) in time! Never mind that the car was totaled in an accident (no injuries/deaths…scratching the paint would have totaled it, it was so old…) a few days later, there is a Special Place in Heaven for these guys! Thanks SO much! You CANNOT go wrong using this place!

When you need honest, quality work this is a shop you can trust. Dependable and reasonable.

I am always leery of mechanic shops when i need work done. I walked into Southwest Transmissions and met Russ. I told him my problem and he said that he would road test it and check it out for free. I laughed and saw $$$$$. He returned from the road test and diagnostic testing, told me the problem corrected itself, gave me some things to watch for, returned my keys and said, "Have a nice day!" I was AMAZED!!! One half hour of diagnostics/road test and it was free!!! Thanks Russ!!! You have my stamp of approval! I recommend you go to Southwest Transmission first.