General Info
A-1 Sewer & Septic Service, Inc. can professionally handle all types of plumbing work from minor faucet and toilet repairs to a complete home or commercial re-piping job.  We are licensed and fully insured for your protection with over forty years of experience.  No job is too big or too small! Call our office to schedule one of our uniformed, prompt, and professional technicians to skillfully install or repair your plumbing needs. Drain Cleaning A-1 Sewer & Septic Service, Inc. has been a leader in the drain cleaning industry since 1968.  Our technicians are equipped with the latest state of the art drain cleaning equipment.  From small lavatory sink drains to the enormous 48” diameter storm water lines, we can clean them all!  So don’t let a backed-up basement drain or sewer line get you down.  Call our office to have one of our uniformed, prompt, and professional technicians near you solve your clogged drain problems.  We service the entire Kansas City metro area, and as always, there is never an additional charge for evenings or weekend calls. Hydro-jet Service For stubborn or repetitive clogged drain issues ask about our hydro-jet drain cleaning service.  This technology uses high pressure water jets to clear and clean drain lines.  It is excellent for drain lines with a build-up of sludge or grease that cause frequent back ups.
BBB Rating
A+
BBB Rating and Accreditation information may be delayed up to a week.
BBB Accredited businesses follow the BBB Code of Business Practices and pay a fee for accreditation review and monitoring. Accreditation is not a BBB endorsement or evaluation of the business’ product quality or competency in performing services. 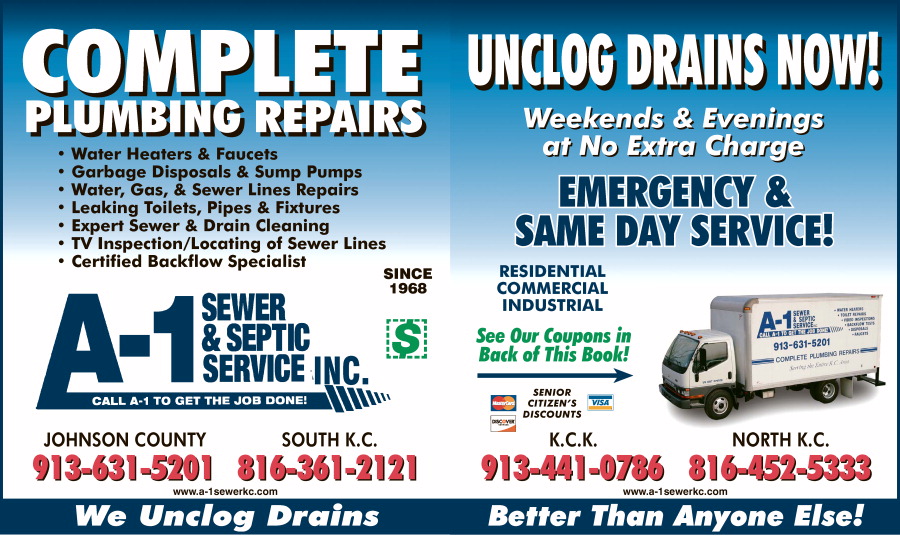 On a Sunday morning our drain line backed up into basement. After trying to fix myself, I called A-1. With in 1 hour a Plummer named Rob showed up, he was very courteous and pleasant, and looked at the problem. Within an hour he had us up and going to finish laundry, bathing , and doing dishes. I have had other company do work around house, and thought they overcharged , but this was the best. They did not overcharge nor try to sell something you did not need. I have friends who are plumbers but were not able to do the job, because of prior commitments, said got I got a reasonable deal. I highly recommend A-1. Rob did a great job.

Used them for years, honest with good service. Prices are very fair too.

quick fast service. I have got a back flow problem, that keeps flooding my basement. I had one guy come out 2 weeks ago and clear my pipe but when it backed up after a week, I had a hard time getting him back here. Van broke down. A-1 was recommended to me by him and another friend. Price was right up my alley, Mike the tech was professional. I will use A-1 in the future and recommend them to anyone.

I've got a drain problem and about once or twice a year I get a back flow in the basement. This time I called A-1 when I got a sewer bck up in my basement. Rob, the technian, arrived promptly and had the drain cleared withing 15 minutes! Services I have used in the past woulod have packed up and left. Rob ran the snake all the way TWICE to ensure the drain was completely clear. He told me the problem appeared to by a low spot in the line. Rob gave me some advice on steps to take to corrct the problem. Rob also gave me a discount even when my printer failed to print the online coupon. A1 is my go to people from now on!

Excellent service............. from the time I called till fixed was 1 hr 50 minutes. Tech Joel called me when completed and was very professional. I am an out of town landlord who now has a new plumber. I WOULD DEFINTELY recommend this company and oh by the way all this was done on a Sunday morning for a very reasonable price.

Was very dissatisfied with the service. Why? I called in to have someone come drain a line for us in the early evening hours. Since they work until 10pm, I was certain we'd have the line done by 8pm. When no one called to say they were on the way by 8pm, I called and they said they never got our request. I told them the name of the person I spoke with, and the they said they don't know what happened, but they could try to send someone out, but if it was after 10pm, they would charge me the extra rate. I told her it wasn't my error, it wasn't that I didn't call in time, it was on their part and that I didn't call anyone else to come out tonight because I was waiting on someone from their company. They insisted they couldn't waive the extra charge for coming after 10pm, because she didn't know if maybe someone from their company had called and I didn't answer the phone. Why would I prepare to spend $130 to fix a problem that is smelling up my home and keeping me from using water, and then ignore the phone call that can fix my problem? I was livid. I would NOT EVER recommend this company to a friend. Sure, maybe there are better workers, but whoever I spoke with was downright rude. I am considering finding out who it was and reporting her to her superiors. Very frustrating.

My Name is Ron Miner and I am the service manager for A-1 Sewer &amp; Septic Service, Inc. I am extremely unhappy to hear of your experience with our companies representative. A-1 has been in business since 1968 and have an A+ rating with the Better Business Bureau. I would like the opportunity to talk with you about your complaint and offer a resolution. There are times when we do not meet our customers reasonable expectations, at A-1 we feel the difference between good companies and bad ones are how those situations are handled. Please call me so we can discuss how we can make this right with you.

This listing has been claimed by a business representative.
Helpful(0)ShareFlag
belaungirl

We called A-1 on a Saturday night at 8:00 for a main drain clog. They were here and gone by 9:00. Completely 100% satisfied. Did not charge an emergency fee. Will recommend them to all my neighbors and friends.

My hot water heater was leaking after 12 years of service. I called several companies for an estimate. A-1 was the most reasonal and I like the fact they have been in business for many years. They called to let me know they were on the way and got the job done quickly, professionally with no mess. I will recommend them to a friend or neighbor. Also be sure to check the yellow pages or Internet for a coupon.