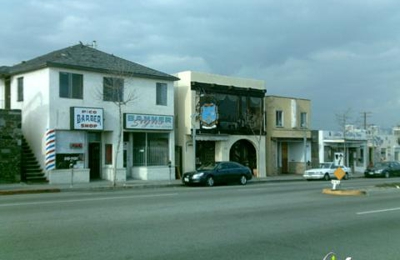 Stay away from the ""semi manager"" named Jesse. He is a large man and he greeted us when we came in. However since our entire party was not there he said he could not seat us and recommended we wait at the bar. I understand THIS IS STANDARD PRACTICE IN THE RESTAURANT INDUSTRY. However when we went to the bar it was completely full with standing room only. I was with someone with a physical disability so I went to Jesse and let him know there was no room at the bar and we would like to be seated. He refused despite the fact his patron had a disability. So we said, ""What if we prepay our bill and offered him $200 to secure payment of the bill. He said yes I'll take your money....but I'll take it for myself and it won't help you get seated or go towards your bill. Two issues.....this restaurant discriminates against disabled people and they give managerial control to someone who is looking out for their own interest and doesn't even care about driving revenue for the very company represents. DON'T GO HERE. I'm sending this to the Better Business Bureau and the ACLU. You think I'm bluffing....just wait!

we are regulars on friday nights here. I left my purse tonight, went back 20 minutes later and all the money was gone. what an embarrassment.

I've been here twice...sort of. A friend and I called on Cinco de Mayo to ask how long the wait was. We were shocked when they said there wasn't one, so we headed straight over (from 2 miles away.) After paying for the valet, we got inside and saw more what we had expected and wanted to avoid---basically, a zoo. We left.

We decided to go back last week, and were greeted by an odd guy who showed us to a table and was kind of weird when we said we'd prefer to sit at the bar. The bartender got us some (verrry sweet) margaritas quickly, but took a while to ask for our food order. My friend's tostada was OK; I ordered steak+shrimp. I got enough food to feed a family of four! First, a tasty salad. Then, the steak, shrimp and ""steamed"" (to death) vegetables. The shrimp were delicious, but the steak was just a hunk of mediocre, unseasoned meat. Ick.

We also felt like the odd guy was hanging back and watching us, which was uncomfortable. Overall a weird experience and I doubt I'll be back.

STAY AWAY! THEY CHARGE YOU 75 cents for WATER!

Went here for dinner a few days ago. Awful service, awful food.
Waiters treat you like you don't exist. They push alcohol and if you
don't order any they look at you like weirdos. Nickel and dime you for everything. Better to eat at a TACO truck than to go to a dump like this.

I really liked the atmosphere of this place, and with 40 years owned by the same family, wanted to love this place. The atmosphere is legit...dim lighting with interesting wooden tables and bar. By the time the chips and salsa arrived and the margaritas were on the table, my anticipation of a great meal was peaked. The chips were thick and made on site it seems and the salsa was spicy and tasty.

Unfortunately when my tamales arrived, there were beyond bland. When I requested hot sauce for them, the waiter brought some kind of goopy tomato paste instead of more of the fabulous salsa. It seemed to have no spice in it. Beans were flavorless as was the rice.

My boyfriend says Bill Cosby would have loved the Mole because it tasted just like Chocolate pudding. It was very sweet.

Service started out good but soured as soon as I asked for the hot sauce. Like I said, I really wanted to like this place, but would love to go back in time and not have gone. At least we didn't pay outrageous prices like we did at Border Grill. Poor Santa Monica. Is there any good mexican food here?

This place is highly recommended if you want a great meal with great service. There is an upstairs and a downstairs area (both are great), but no matter where you sit you get great service. I have been about 10 times now, and each time I am impressed. Any carnitas dish is excellent.

With so many Mexican restaurants in Los Angeles, it's hard to stand out, but this place definitely does! Everything I've had on the menu has been wonderful - I recommend the huevos rancheros or the carne asada tacos - the meat is tender and very flavorful. Their margaritas are strong, but still taste good and I love their Mexican hot chocolate. Oh ... and they have the best guacamole!

My husband and I decided to try this spot out on Friday night. We didn?t have to wait long for a table. The food and salsa were great! Fast services and I loved their margaritas.
One weird thing?the bartender was our bartender, food server and he busses tables too. They all seem to help each other out and it works. Tiny bar area downstairs and no room to sit and wait. Up stairs has more tables and another larger bar. They have two waiting list: one for down and one for up-stairs. They had 2 string guitar players that move around the room. Over all we had a great time and I plan on going back and bring friends.

I am not sure why others would write a review on their salads and streaks. Lares is one of the best of LA, with a great atmosphere, staff, and traditional down home mex (nothing fancy). Order the mole for some of the best in town. Great spot to meet friends.

i love this restaurant. every time i go, the staff is so friendly and prompt. the decor makes you feel like you're in quaint restaurant in Mexico. The potato tacos are the best!

After passing by this two-story restaurant and always seeing a crowd outside its cool-looking Spanish colonial engraved wood sign, my fiance & I finally made it in. Upon first entering, we were graciously greeted by an older, heavily makeup-ed woman whose name easily could've been Dona Maria. Big plus. We were then seated by the window, which afforded us a good view of passersby as well as the trickling-in crowd on the first-floor dining area w/the white plaster walls & dark-wood sunken bar. Very cool. After ordering some soup de camaron (shrimp) and steak, I walked upstairs to discover the very lively & urbane dining/bar area that led to yet another rear dining area w/mariachis walking around. Fantastic! Then... the food arrived. The soup was competely impotent -- bland, blah, flavorless with shrimp that had THAT DIRTY LINE OF FECES ON ITS BACK VEIN!!! gross! And my fiance's steak? Let's just say he took one bite & said he may as well have had a rubber shoe on his plate. To the restaurant's credit, our server was very helpful and asked if everything was ok since he noticed our stil-full plates/bowl. We just said we were full and enjoyed a song from the mariachis (who had by this time made it downstairs) and left. Very unfortunate that the food sux so much cos we really wanted to come back -- but I am Mexican-American and this food is in no way indicative of what Mexican food should be. Tsk tsk.

i love this restaurant. everytime i go, the staff is so friendly and prompt. the decor makes you feel like you're in quaint restaurant in mexico. the potato tacos are the best!

Of the many Mexican restaurants that pepper Los Angeles like New York City Starbucks, this is very near the top of the list. The ambiance is comfortable and unpretentious, but nowhere near seedy. The energy spent at other restaurants forcing waitstaff to wear ""authentic"" Mexican dress is clearly aimed at making the food authentic here. Incredibly fresh chips and homemade salsa made their way to the table quickly, and came dangerously close to being too filling.

The menu is extensive, with many standard Mexican fares scattered among some more unique dishes. One that caught my eye was steak served with cactus. In the end I decided to go with the more traditional tamales. The texture was perfect, the chicken was roasted to an amazing tenderness, and the red chili sauce was a perfect spicy addition.

Waitstaff was kind and super attentive and the wandering flamenco minstrels were a nice touch.

Will make this a new West side dining destination, and will be sure to try a margarita next time.

Lares is a great. The food is great. The ambiance is terrific. The service is the best. The prices are adequate and I always go back. Never have a bad experience at this place, although it does get stuffy on Friday night. It's a happening place for being on Pico! Go and enjoy a nice relaxing night at Lares and ask for a special margarita.

i was hesitant coming back after the fire... but, i am so glad i came back. THE CARNITAS ARE STILL JUST AS GOOD and the don julio margaritas are just as yummy! the ambience in this wonderful restaurant is just festive. and if you are looking for tex-mex type food -- this is not the place to go. and thank goodness for that! i will definitely keep on coming back.

Ambience is key at this hidden treasure of a Mexican restaurant, tucked away on Pico. From the old, world, rustic dining rooms to the roving mariachi bands on weekends, the place welcomes you into an inviting atmospehere of elegance and charm. And the food is good, too! Warm, fresh tortilla chips start off the meal followed by expertly prepared entrees that seem less touched by Americanism than at some of the other more well-known Mexican restaurants. For example, the fajitas come sans guacamole and sour cream, but they feature the most divine combination of ingredients! Parking can be tricky, though, so it's a good thing they offer valet service.

I've been to Lares quite a few times for lunch with coworkers. It's a great little place, with a nice, friendly, atmosphere. I'd like to try it for dinner, as well, as the ambience seems to lend itself to a cozy evening with friends, or a date. The margaritas are excellent, as are the tacos...and you can't go wrong with the carnitas burrito! I've always had friendly, gracious service, and an overall good experience. I will continue to go back!

After reading the reviews, thought I had found a great new place to try for our weekly Sunday dinner. I had the carnitas enchiladas, their ""recommended"" meat, and wasn't really very impressed. It was ok, but tasted like average greasy Mexican food. Cool hidden-away atmosphere, great service, and an excellent margarita round out the meal, deceide for yourself...

Decided to go here for lunch recently. After reading the reviews, I was pumped up. I was definitely not disappointed. I am a huge fan of Mexican food; I've been to El Chollo, Casa Vega, Border Grille, etc., and the bottom line is that Lares is one of the best Mexican restaurants in L.A. The carnitas were excellent, and all of the entrees seemed to be reasonably priced. If you want down home Mexican food in a casual setting, then this is the place to go.

Without question the best Mexican restaurant in L.A.--food, drinks, staff, and the rest.