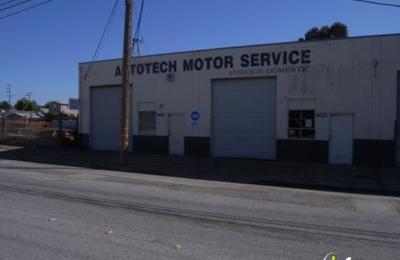 I recently bought a used car (M5) off of craigslist and I noticed I was leaving puddles of oil everywhere that I parked (including in the driveway at my home). In Business for 25 years is painted in a huge sign on Autotech's wall so I figured that they've been doing something right, I drove right in and was greeted by Sami, who I found out is actually the owner. I told him my situation and he assured me that they would find out what was going on with the car so I left it there while I walked down the street for lunch. An hour or so later I got back and Sami let me know where the leaks were coming from (there were several). He gave me an estimate of repair, a lot less than I was afraid it was going to be! and a time frame. I left my car there, got a ride home and picked my car up the next day just like Sami had told me. No more leaks!! Sami is the man! He let me know what was happening without putting the pressure on, and He is fair. Autotech is the place to go. Its where I plan to make my one stop shop for repairs.

I had a used car I was looking to buy on March 17, 2011, and I checked the AAA website for an authorized mechanic to do an inspection. I called Autotech and spoke with Sami Haddad, who is either the owner or head technician and he was very courteous on the phone and we set up an appointment for later that morning. He told me he had another appointment across the bay and wouldn't be back until about 11 am and explained that, though all his techs are very good, he wanted to be the one to personally do the inspection, that he took it very seriously and would also advise me on how to negotiate with the seller based on blue book, etc. He performed the inspection on time and I was amazed at how thorough he was in explaining all his findings and also advising and discussing with me what he thought would be points of negotiation. He was ultra professional and really made me feel like I was part of the discussion and not just another customer to be "talked at" and condescended to. I would used Autotech again in a heartbeat!