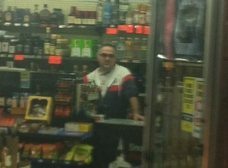 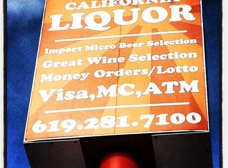 Here is a liquor store story where spirit does not refer to the alcohol. It is pretty short, simple, and free of Johnny Walker wisdom despite the setting.

When Kahled Goro arrived in the US from Iraq in 1982 he had no work the first day. On the second day he started working and has been going strong ever since. And now it is California Liquor on Juniper that he owns and runs.

Khaled runs a clean store. With 16 years in the business he has some stories to tell too. From his counter he’s watched South Park grow into the fairy tight community it is today. The shop has all the convenience store standards you’d expect in any liquor store from Padre baseball caps (he’s a loyal fan) and band-aids to milk and local craft beers. It has a lot of reasonably priced fine and discounted wines and liquor too. Services include money orders, key making, lottery tickets and an in store ATM (transaction fee $1.75). Something on the shelves called a Chelada Mix (just ad water and booze) tells me Goro knows his market and this community better than most of us do too.

“It wasn’t long ago,” he says, “there was the Mazara Pizza, the Big Kitchen, Us and not much else here. It was not so safe.” He stuck with it, and before that he also worked long hours earning his stripes, from day two, in an Imperial and Market area liquor store. “I did not like to go to work much then,” he says, “but I do now.” Why? and why have so many Iraqi’s have gravitated to liquor stores as a business model? “It’s hard work, but that is all,” he said, “we can do that and give good service”

That he does, and in season there is usually a Padre game on too.