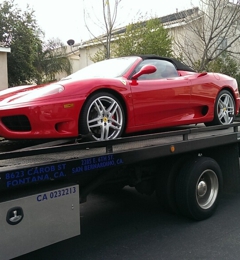 Armada's service is outstanding. I had a dead battery in my vehicle (I knew it was dead and needed replacement). They tested the battery and installed a new battery. The service technician was extremely professional, explained everything he would be doing, and cleaned up. Their price was very competetive AND I didn't have to leave my house. Total time it took from when I called AAA until the technician left was one hour.

this company is unreliable! they give empty promises. you will be stranded for hours. do not recommend this company!!

This company deserves a NEGATIVE rating!

My son is a college student at one of the universities in San Antonio. His car broke down on campus and needed to be towed to an automotive shop close to the university. We have a AAA membership and they assigned Armada towing company to tow the car & take to a nearby automotive shop. We were told by AAA by the shop was 4.4 miles from campus. I also looked up the distance on the internet, which also noted the distance as 4.4 miles. We were told that the cost would be $8 to tow.

My 19 year old son met the driver at the car and unlocked the car for the tow truck driver. After the car had been lifted onto the tow truck, the driver left and forgot to get the car key from my son. He towed it to the auto body shop, left the unlocked car in the parking lot, did not check it in at the office, and told a technician out in the parking lot the he'd be back with the key. The driver never called my son back to say that he needed to go back to get the key from him.

I didn't find out about any of this until the following morning when the manager of the auto shop called me and told me about the unlocked car being left in the parking lot without being checked in. My son was also unaware of this until I called him. My son also informed me that he was charged $24 instead of the quoted $8.

I got the contact information for the towing company from AAA and called them directly. When asked if they could go back and get the key from my son and take it to the auto shop, they stated, "That's something we typically don't do. He'll have to take the key over there himself". I also asked why my son was charged $24 instead of $8. I was told that the distance was probably longer than what AAA quoted me. The person who I was speaking to (Althaa) looked up the distance on the company's GPS . . . the distance was 4.4 miles. My son was overcharged by $16. Althaa had no explanation for this. I was then given the manager's phone number so that I could try to settle this with the manager.

I immediately called the manager, Milbes. After explaining everything over again to him, he agreed with me, stating the car shouldn't have been left at the auto shop without being checked in, and that my son shouldn't have been overcharged. He told me that the driver of the tow truck would receive a consequence. He also told me that he wanted to make the situation right. He said that he would drive to the university within the hour, get the key from my son, reimburse my son $16, go to the auto shop, and check the car in. I then gave him my son's phone number so that he could contact him. I also informed my son that he should be expecting a call from Milbes.

Not only did this company provide very bad business service, they are also guilty of theft. Ripping someone of for $16 is still theft.

I guarantee that I'll be filing a complaint with the BBB against this horrible company.

I left an interior light on in my car, which drained the battery just barely to the point of not turning over. I called AAA, AAA sent me Armada.

Upon arrival, the tech immediately asked me about the age of my battery (which I've had no issues with when I'm not doing stupid things like leaving lights on overnight), and decided that he needed to "run a diagnostic" in order to tell me if my battery was "safe to jump", or if I would need to buy a new battery.

This already didn't feel right to me, I've had vehicles jumped plenty of times in the past, and I've never gotten that kind of... it felt almost like a threat. I went inside while he was running the diagnostic, and told my fiancee that something felt off, and that they probably had a battery in their truck to try to sell me.

And sure enough, their "test" came back as my battery needing to be replaced! Fancy that! And hey, they do remote installs and just happen to have one with them! The guy seemed genuinely surprised that I turned him down- I can't imagine how many people they actually get to buy from them on the spot.

In the end, he thankfully did jump my car without requiring me to buy a battery, and I'm grateful for that at least. But the whole scammy sales push left me with a very bad taste in my mouth, and I wouldn't go to them for help again if given the choice.

I called AAA due to a dead battery and they sent a technician from these fine folks over. There was a bit of a wait for his arrival but it was around 8am which I would wager is a busy time of day for them. When he did arrive though, he was extremely competent and professional, quickly confirming that it was a battery problem and giving me a jump. All in all, excellent service.

I needed a tow for my car and was looking online for a reasonable price. I called several places but the phone #'s only led me to voicemails. I Called Armada and spoke w/ Avery who arranged to have his driver Theo pick me up so I could show them where my car was at and Theo the driver even stopped by my babysitters so I could drop off my daughter. Theo picked up my car and dropped me back off at home @ no extra charge and safely took my car to my mechanic. Armada is very very reasonable and very professional. They really take care of their customers and don't act is if your a burden (which other tow companys have.) So if you want good towing service call Armada.