People who know go to AAMCO! 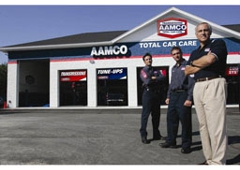 My car with over 160,000 miles began having transmission trouble. I went to AAMCO and had Ryan and the team check it out. They said it would most likely need a transmission rebuild, but I had them replace the solenoid pack first. That didn?t do the trick, so I had them do the rebuild. Ryan didn?t charge me for labor on the solenoid pack replacement. They gave great service and were always very friendly. My only concern was that it took longer to complete than originally I was told. This was mostly due to a part that had to be shipped. Other than that, I had a good experience and would recommend them for transmission repair.

AAMCO was very helpfull with my truck i was told by the dealer that i needed a new transmission. I took my truck to AAMCO for a second look . Ryan the service manger told me that he would look at it for free . The next day ryan called me and said my transmission was not going to have be rebuilt . They fixed my truck that same and it only cost me $ 245 my experince at AAMCO was very good i would tell any one who wants it fixed right to go see ryan at AAMCO

I was having transmission troubles. Ryan got me in right away and answered all of my questions. I was really happy with his service and the rebuild of my transmission. He gave me a warranty too. I recommend Aamco to everyone.

Got into my car to go to work and it it would not move. I called my Dad and he said he would call Aamco, because he has had work done there in the past. So Aamco tows my car to their shop. I'm thinking the worst and so is my dad because the car would not move and there was a grinding noise. Aamco calls me around noon and tells me My axel poped out of the transmission and needs a new clip or something any way they fixed my car for under a hundred dollars. The car works great. These guys are Great I would recommend them to anyone. One more thing my dad said that his transmission was fixed there over 40,000 mile ago with no problems.

Bunch of shady folks that blantently lied about what was wrong with my car. They try to get you with their free Diagnostic check. Take your car to a shop where the mechanics don't work on commision to get honest work done. DON""T TRUST AAMCO