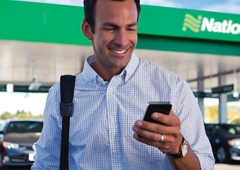 I am a recent Emerald Club member and couldn't be happier with my experience so far! I was impacted by the storms that hit 12/16-12/17 and impacted the airline industry. My flight, from St. Louis to Denver, which was delayed 11 hours was cancelled at 1:30 am on 12/18. The next flight available to me was 12/21. Needing to be back sooner I decided to rent a car and drive to Denver. I showed up at 2:00 am, and even though the systems were down, they were very understanding of my situation and took care of me as soon as the systems came back on line. I grabbed a Jeep Compass, which was a perfect vehicle for the conditions, and couldn't have been more satisfied. When I finally arrived in Denver (13 hours later) I couldn't have been met with any more "Enthusiasm" and "Appreciation" for my business!! I definitely made the right choice with the right rental company! Thank You!!

I reserved a minivan on Thanksgiving night and when I got there, there were only 3 vehicles total available and one representative on duty in the office. I realize it was Thanksgiving. Luckily, 1 of the 3 available vehicles was a Suburban because I had 5 other people counting on me to pick up a vehicle that would accommodate our group. The Suburban worked fine from a room standpoint, but it smelled of smoke, needed to be vacuumed and wiped down, used a lot more gas than a minivan, and was difficult for a few guests to get in to the back row because the middle row was a bench and not bucket seats. I also had credits to use for 2 of the 3 days which were applied during the reservation and confirmed by the agent, but upon return was charged the full amount of the rental. The credits were not applied, so I had to call a customer service line to get this fixed. The customer service gentleman did a great job fixing, but it was still a hassle. Everything worked out alright in the end, but the situation wasn't perfect and makes National hard to trust for future use. If that Suburban wasn't there, I don't know what our family would have done for our trip.

they were a pleasure to deal with.No hassle picking up our car and we were allowed to pick any xar in our group.Thats a first.
return was a pleasure with a delightful young woman.

They were very disorganized. The check in process was chaotic. The return process was much better except they tacked on an extra $100.00 plus that I still have no idea what it was for. Be wary.

The first selection was a Honda that had a warning light on When I asked if the light indicated if it was a low tire pressure the response I got was yes and it might go away or I could stop at a gas station and fill it up. Most of the cars were gone by then and the only one left was an upgrade (an Infinity). While the car was nice, the cleanliness left a lot to be desired. The upholstery was dirty and the cup holders were disgusting.

If I could select negative stars - I would. The worst car rental experience of my life. I will never use National from the STL airport again. The agents were rude when I came to get my car. The reservation did not have the car type that I needed. In spite of the fact that I had called one week prior to confirm the SUV would be ready for us. It took 2 hours to get my rental. The 'customer service' at the counter was deplorable. Returning the SUV was equally poor service. I pulled up to the return area and got out with my documents - and waited. The 2 agents checking in cars were too busy looking at the phones to even look up. I said 'excuse me' several times but one ignored me, and the other just rolled her eyes at me. I went inside to ask for help and the woman at the counter said "see that girl with the name tag on? you need to go to her" I will never book with Emerald Club again. I will be booking all my future trips with HERTZ rental.

Don't arrive in St. Louis to National Car Rental after midnight!! It's a horror show! The shuttle will usually stop service after Midnight. This time I was there at 11:30pm, the shuttle was running! I'm an Emerald Member, they drop you off, you grab a car, hand your papers to the person in the exit booth and you're off.. NOT ON the night of MAY 17. They had a local police officer standing at the exit with a clip board in hand apologizing to customers telling us we had to turn around, park the park and go inside the office to wait in the line to check out - with the Alamo customers. He told me National called him to man the exit because they had an employee that had to leave and they were short of staff!! What private company calls in the local tax paid police to staff a position for their company at midnight??!!! This is only one of many stories of delay I've had because of employees not there or not knowing what they were doing in the midnight hour.

Up until this last rental, every rental from National was satisfactory. And pick up at Lambert International Airport is convenient. I was enjoying my Emerald Aisle privileges until I learned others in my circle of friends and family are maintaining their rentals for one week at the same price I pay for a four day rental, I am curious to know why. A weekly rate opposed to a daily rate would do me well. Other than the price discrepancy, the people at National and Alamo have been kind and the availability is excellent. Sincerely, Kim Daniel

Poor service. The last two times I've rented here the Emerald Aisle was completely empty. The first time I waiting in a line outside for 5-10mins while they brought cars in for everyone. Inconvenient, but not too big a deal. The second time, they told me to go in the center where I waited 20 mins for the counter person to get off the phone with a customer. I understand they were already on the phone when I arrived, but after 10 minutes and given the nature of the call it, would have been courteous to place the caller on hold so I could check out. It seems like it was the caller's first time renting because they were asking very basic questions about insurance and drivers license rules etc, not making a reservation. Yes it was 5am so I was still the only person waiting for the call to end. Finally it did and then the agent tells me it will be another few minutes before he can help because he has to boot the computers and login to the system. All of which could have been done while I was waiting all that time. HELLO?! Now, while I'm finally being checked in, one of the attendants pulls a car and parks it in the Emerald Aisle. My agent, though, assigns me a compact car even though I rented a full size. He tells me his boss says only the compact is allowed to go on a one way rental. I'm Executive emerald with National and have equivalent status with Avis, I have been around the rental block my friend. You are not going to Seinfeld me. I asked about the full size car now in the Emerald Aisle and he demurs, well you can take that one if you want. Well DUH?! I've rented from this location many times in the past and only my last two experiences had problems. But this last time was enough to make me choose Avis from this point going forward whenever I'm in STL.

I do a lot of travel as part of my job here in St Louis and I need to rent cars on a regular basis. The only place I rent from is National located at the airport. I've yet to experience any service better than National's Emerald service. I can pick the car of my choice and go through the exist in a matter of minutes with no hassles. National is the best!

Unbelievable customer service!! I accidentally locked the keys in the trunk of my rental car when I was at the curbside check-in. I called the National Car Rental desk at St. Louis airport in a panic because I didn't want to miss my flight. The Manager and associate both came to my rescue and not only got the keys out of the trunk, but also drove the car back to the return center for me. WOW! Not that is customer service. I do travel a lot and plan to use National car more in the future.

I rented a car from this location last week. I am an Emerald Club member. Since I was in a hurry to get to a business meeting, I failed to check the pressure on the car's tires. After a few minutes on the highway, I noticed the tire pressure light on the dash -- left rear tire had 6 PSI. Again, I didn't have time to go back to the airport to exchange the car, so I continued on to my office, thinking that I would put air in the tire after work. When I returned to the car later, the tire was flat. I called the 24 hour roadside service at 5:12PM. Help arrived at 6:53PM. This is actually the second time in the past 18 months that I've had this "low tire pressure" experience at this St. Louis location. Why can't this be fixed?

The staff was great and the Emerald Aisle was smooth and quick. The Escape EcoBoost was the perfect car for my travel to south MO. My only frustration was trying to find the rental location to return the car during the morning rush hour. The location isn't on the airport and the signs leave a lot to be desired. This comment isn't directed at National, but to the airport.

Best way to start and end my business trip. Courteous, fast, and open 24 hours. Looking forward to my next visit.

Great service and extremely friendly staff! In and out with Emerald Club

ALL GOOD! Quick pick up and drop off was a breeze. Shuttle from airport was quick