BBB Rating
A+
BBB Rating and Accreditation information may be delayed up to a week.
Hours
Regular Hours
Services/Products
We carry Bridal Gowns, Bridesmaid dresses, Mother of the Bride/Groom, and Flower Girls to dress your wedding party. We also have tuxedos available for rent from Jim's Formal Wear. We have a wide variety of Cincenera and Prom dresses in stock. We do alterations in the store for any item that requires a needle and thread and we have over 30 years experience.
Brands
Dave and Johnny, David Tutera, Jasmine, MaggieZhou, Mary's Bridal, Moonlight Bridal
Payment method
visa, mastercard, master card, debit, check, cash
Location
We are located just past one stop light East of Lindeberg, across the street from Shop N Save, and West of Woodlawn. We are on the South side of Manchester
Neighborhood
Sylvan Forest
Languages
Cantonese, Chinese, English
Other Link 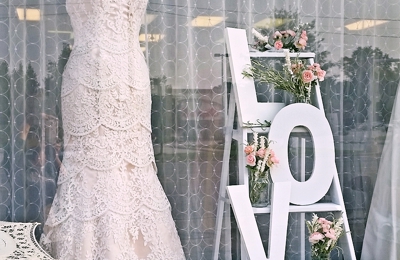 I came in for a veil to be made (already had my wedding dress). I brought in all of the materials for the veil that my wedding dress designer had provided. I also introduced her to a few friends needed dresses in the meantime. It took her over a month to make this veil (a very simple veil) and finally, when I called and said I needed to have it finished, she told me 'ok, I will work on it.' Work on it? It should be finished! It was a simple veil design that I needed with a couple beads stitched across the comb. Anyway, I came in today to pick it up and she still hasn't started on it. She looked surprised at me and asked if I could come back in an hour. I busied myself for an hour and came back to pick up the finished product. First, the few beads that were stitched across the comb were loosely attached and one was even falling off! I asked about the beads and she said 'that's normal. That's the way it's supposed to be.' I figured I was done dealing with this so just went to pay.... That's when I about hit the fan. $350!!!??? For a veil? A PLAIN veil?? Which I brought in all the materials (the fabric, the beads, etc)!!?? I asked her to clarify the amount. Yup. $350.

I'm shocked. Especially since when I dropped the materials off for the veil to be made, I asked for the amount and was told by Helen 'oh... It won't be much. I don't know right now but it won't be much.' I figured maybe $100 max.

I will never patronize this shop again. Total rip off.

On 2/2/15 I dropped off a brand new Vinyard Vines red dress to Helen's Briddal aka Alterations by Helen located at 10404 Manchester Road in Kirkwood. I wanted the dress hemmed. I gave specific instructions NOT to cut the dress, but to roll the fabric and hem. The girl who waited on me wrote on the order ticket #20904 "Do Not Cut Fabric" she also wrote on the same ticket "Hem, do not cut fabric, just roll" There was a $50 charge which they had me pay in advance. I went today 2/10/15 to pick up dress and the owner handed the dress to me and it had been cut off!! I said you cut the dress and I gave specific instructions not to cut it. I also explained to her how specific I was and had her read the ticket. She agreed that they were not suppose to cut the dress, but she told me the person doing their alterations does not read English!!! I asked her to refund my $50 and to buy me a new dress. She refused both. She told me it would be fine the way it was and later I could just sew the cut off hem back on. I asked her several times to refund the $50, even handing her my credit card, she refused. This the worst customer service experience I have ever had, the owner was rude, yelled at me and told me to get out of her store. There were several other customers in the store. I have the receipt, the original order ticket with the instructions, and the cut up dress! Do NOT go there for alterations, they cannot read English, per the owner of the store. And I would NOT recommend buying a wedding dress or prom dress from any place that cuts up people's clothing!

Helen has done a beautiful job altering my future daughter-in-law's wedding gown! After receiving a very poor fit from a different dressmaker, we brought the dress to Helen on Thursday morning and the wedding is on Saturday! The fit is Perfection and ready for pickup on Friday! She is an answer to prayer!

Service and alterations were great!

Helen knows what she's talking about. She made my wedding dress look great. She pays close attention to detail, and even notices little flaws that I didn't! If you're looking for a place you can trust for wedding gowns, this is the place!

Excellent Work I have been going to Helen's Alterations and Tailoring for well over a year now and have been more than pleased with work. She provides excellent tailoring at a reasonable price.

You have NEVER met nicer people in your life. The selection and customer service at helen's is beyond compare! Loved our experience here! Dana 9/20/11