Over 50 Years of Fine Service!

General Info
We’ve got a long history in south St. Louis. Our company was started by my dad, Emil F. Harster, in 1950. It was a one-man, one-truck company and it’s grown to 28 employees and 24 trucks today – serving some 20,000 St. Louis Metro residents and businesses. We’re located in Affton (yup, John Goodman’s hometown), in an historical building that was once my grandfather’s hardware store. I’ve been the owner, manager, chief cook and bottle washer of Harster since 1986. My philosophy’s always been “the customer’s always right”, and to do good work and to charge a fair price. Funny how some companies just don’t get that. Our customers are loyal because we follow that code. I insist on industry certification and honest, ethical practices. It’s a pretty simple recipe, actually, and one that’s a tradition I hope continues for many more years.
Email
dharster@att.net
Extra Phones

Associations
Family Owned and Operated
AKA 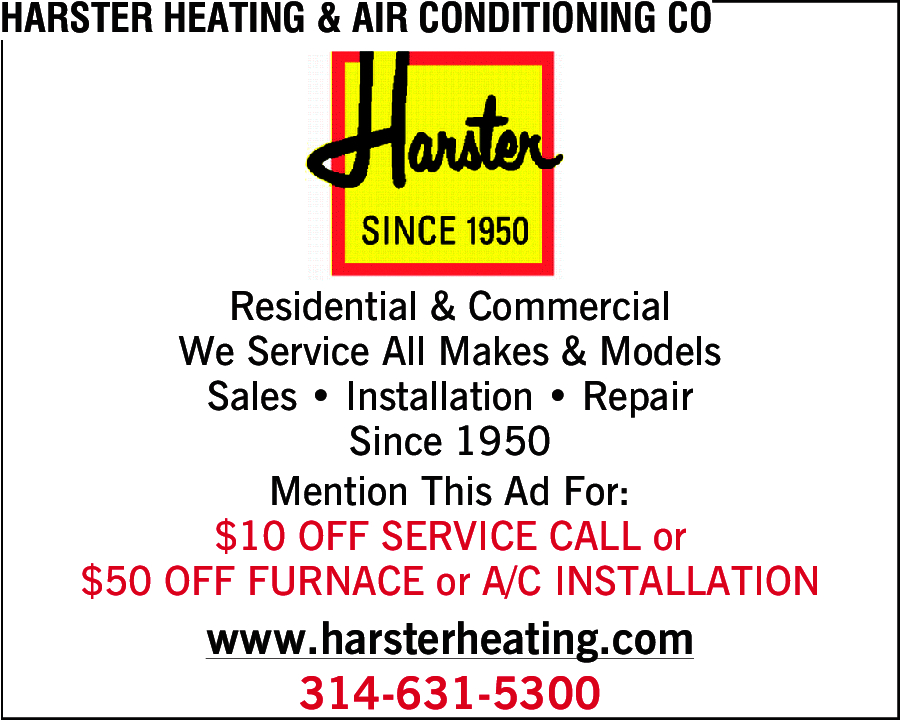 I called Harster after my ac went out. They gave me a two hour window for service and were out in 45 minutes. The service man was nice, informative and helpful. He told me about a coupon they had online that saved me $20. The price was reasonable.

Harster replaced our furnace and a/c, January 2012. The sales person was very pleasant and thorough in his quote and in his explanation of the products as well as follow-up with us. Harster didn't ""guess"" at what products we needed for our home. The sales rep. came out and measured/evaluated the products we would need carefully. Our choosing Harster was based on the product, price and the sales rep's knowledge. (We also rec'd quotes from 2 additional carriers.) On the day of the installation we had no less than 6 men working at the house and the sales person came as well. I was very impressed by the company and the professional respect they each showed while in our home. The sales rep also was very familiar with rebates that were available with the products. I absolutely would recommend this company. We felt valued as a customer and the company treated us as such.

My AC broke towards the end of the weekend. I called Harster, since they had such good reviews and a friend of mine recommended them, Monday morning. Even though they were busy they setup an appt with me that afternoon. The tech came to my house and ran some tests, he explained everything to me and let me know what the problem was (low on Freon or whatever they use now). He recharged the system and even did a few maintenance things for free. After he was done he reviewed in detail the bill and offered the maintenance plan, it was such a good deal I signed up for it too. Thanks Harster!

I would like to share my experience with Harster. When your air goes down in the summer in St. Louis, you need it fixed fast. I also don't have the luxury to shop around much because I work and had to set up an appointment. Numerous appointments would have been difficult. I had to hope I chose someone honest and reputable. Not only did their technician (Jerry) fix my AC but he schooled me on what to expect in the future. He told me all my options depending on what he found to be the problem and never tried to sell me. Being ignorant in this field, he could have told me anything and knew it. Same day service, on time for the appointment and professional all the way. I will definately use them for any future needs in the HVAC field. I've never taken the time to write one of these reviews but felt it necessary to acknowledge this fine company.

I have my a/c and furnace checked each year by the service people @Harster. They are prompt, professional, reasonable and give good advice for the upcoming seasons. I appreciate this company and recommend them to anyone