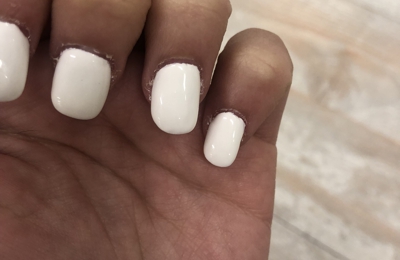 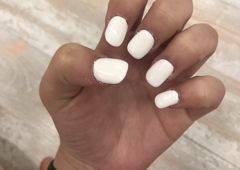 These are the worst nails I've ever seen. Literally, these nails are ridiculous.
Rather than making an issue in front of the customers at the salon or causing any public confrontation, I called the salon when I got home to let them know that my nails were terrible, my cuticles were damaged and painful and that I wanted a refund because I did not have another hour and half to spend getting them fixed, nor did I feel like my cuticles could handle anymore abuse. I sent the pictures below to them and then I soaked the nails off and sent a picture of the nails removed, so they didn't think I was actually planning on keeping these trashy things on my fingers and trying to get something for free.

Of course they were rude, unprofessional and dismissive. Not like I expected a salon that does nails that look like this to stand behind their work, but I at least wanted to give them a chance.

I am going to dispute my credit card charge, contact the Utah Cosmetology Board with my concerns about the licensing of somebody who does nails that look like this, and I'm going to contact the correct authorities to check into the legal status of their employees.

You would think they would just stand behind their work. I guess they would rather go to war over $45. Not a problem, I have some time off this week. Ultimately, it will cost them WAY more than $45 in the long run. Really stupid way to run a business!

I told them that I'd be happy to just chalk it up as a bad experience and move on if they refunded my money. But if you are reading this, then you can be assured that not only do they do their nails like an untrained, unlicensed kindergartner, but they will keep $45 and pretend like they earned it.

I'll let the pictures speak for themselves.