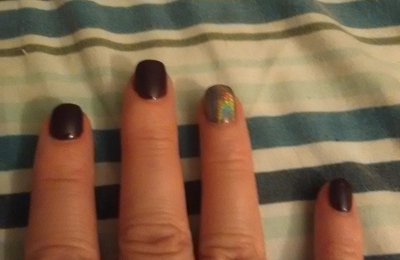 This is the second time have been to this nail salon. I absolutely LOVE this place. It's professional and calming. I always get the same lady, she sits right behind the register, as a walk in. I have nothing but great things to say about her and this salon. Thank you thank you. I would recommend this place to everyone. They are efficient and do an incredible job.

The best Salon I have ever been to, yes the wait time sucks, I wonder why. Because they are the best. Everyone there does a great job and is always so friendly. I have taken my sister and a few girlfriends here and they are always saying how its the best salon they have seen in years. They take their time to get it right, And they always pickup my shoes and purse for me to move over to the next station. They care. they laugh, they smile.

First, I will say that the salon is clean, and it's refreshing to have relaxing music playing in the background instead of the usual screaming TV talk show found in many salons. However, the manicurist I had yesterday needs to learn some people skills. She did not smile, greet me, or act friendly in any way whatsoever. The first "conversation" that she initiated was to ask me if I wanted to put her tip on my credit card--and that was after my pedicure and half way through my manicure! She wore a sour expression, carried on a conversation with co-workers, looked around to see what was going on in the salon, and generally looked like she would rather be doing anything other than giving me a pedicure and manicure. No, I do not want someone talking constantly; and yes, I realize that many of these workers have limited English. I'm simply asking for common courtesy. A smile! A greeting!. That is not too much to expect from anyone. With so many salon choices, she should be aware of this. If I do go back to this salon, I certainly won't let her perform the service.

Absolutly love this place. It's a great environment; the workers are great at what they do and are very friendly. they keep up with the lastest trends and do their best to give you exactly what you want. they are the best nail salon I have ever been too.

I HAS WEDDING PARTY WITH 9 OF MY FREIND. WE ALL AGREE EXELLENCE SERVIVE. SHOP IS CLEAN, LUXURIUS

I was a customer for a few years, and normally got good service. On one occasion, the pedicure was painful and caused an infection, which I brought it to their attention. Four months later, not only did I get a bad infection from a pedicure, I also got a fungal infection in both toes, which I'm still trying to clear up. Needless to say, I have not returned. May I suggest US Nails up the street-- excellent!

The price is not the best in town. The employees are friendly. Though, the nail work is poor. I can spot mistakes in the polish right afterwards and they aren't gentle at all whenever they work on you. When getting a pedicure it was almost painfil... which I have never experience before... I wouldn't come back...