General Info
We have been serving our community and businesses since 1970, 45 years of experience to help our customers with their needs. Our company provides electric motors and related services.
Email
Email Business
Services/Products
Here is a list of some of the services we provide. Rewinding single phase and three phase motors. Bearings, mechanical work, machine work., motor controls, magnetic starters, overloads, pumps , pump motors ,compressor motors ,dc motors. We also provide free consulting and testing of most motors without cost.
Location
Serving All of Northern California
Neighborhood
North Sacramento
Other Link 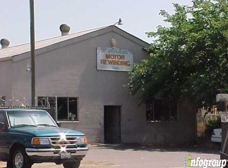 This Place is absolute Garbage! 6 months ago I brought in a fan motor for service. I was unable to pick it up for 6 months but I imagined if there was something wrong or if it was ready SOMEBODY WOULD CALL!!! Nothing. Six months pass and I could finally pick it up. After I showed the guy my tag he asked me to describe the fan instead of matching the tag. Once it is clear what specific item I'm talking about he seems confused why I would be there to pick up because "It's bad". I ask "What's wrong with it?" He doesn't know, they have to dig into it, and he could take a look today. I ask why no one has called me and/or the repair has no been done. He directs me to the phone number on the tag that I should have called. Apparently, YOU need to call THEM to see if they've done anything!
I decided it was time to cut my loses, get my fan and get the hell out of there. The gentleman retrieves my motor FROM OUTSIDE!!! It looks worse than when I brought it in. I can only imagine that, what ever was wrong with it, it's worse.

Wolfgang Rosenau knows his stuff! My husband shopped around but keeps coming back to do business with Rosenau Motors.