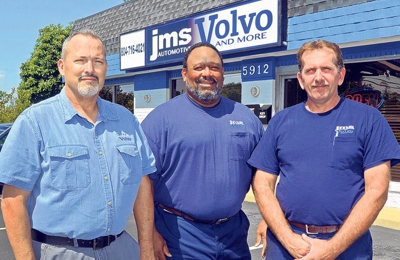 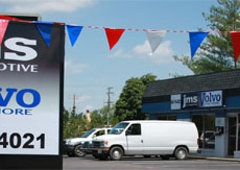 I had an excellent experience with JMS Auto Volvo and More. I asked for a quote before making an appointment, and they were the most honest quote in town, never tried to convince me to get anything I didn't need. When I came for service, I was helped immediately, and I only had to wait 40 minutes (whereas at other locations I had waited hours!), and the waiting lounge was filled with coffee, snacks, TV, couches, magazines, and free wifi. I am 100% going back to this spot every time.

These guys are so amazing.

I had moved here around the same time my inspection & tags expire after moving from Texas and at the same time everyone was shoving into every mechanic shop in the city for inspections. These guys were full, but totally understanding on how I won't be able to drive with expired tags so they referred me to another shop that could squeeze me in.

I still came back to them afterwards for a gas leak coming from the top of the tank. Other shops wanted to drop the tank an charge me crazy rates $$$$ and charged to just take a look, but when I stopped by JMS they pulled it right up to take a look for no charge for an estimate. It was just a loose hose; they only had to take a couple panels out of the trunk to access the top of the tank instead of dropping it. It’s that easy with my old 1991. It only cost me 40$ which is an awesome price range for me.

Same thing with my oil leak, they pulled it up free of charge to give me an estimate.

I went back for my exhaust pipe under the car, it was pretty rusted an it had gotten loud, they pulled it up an actually pulled me back in the shop to show me what the problem was and discussed options. It’s great that they do that. It was all the pipes that wrapped around the axel an what not. Really tight space and it was about to fall off. Even though they didn’t do any soldering or muffle repair, they referred me to someone at a great price an who wouldn’t try to sell me into replacing the whole exhaust system, something I don’t need.

The other time was today, I heard my front brake start to grind. Did a quick stop by Firestone an they said I needed front brakes AND front rotors for 300$. But when I stopped by JMS to get there opinion they said all the rotors where fine and the pads are fine too but went ahead an changed the fronts to be safe. They didn’t make a peep after that. An since JMS was reasonable with the brake pad price, I went ahead asked them to estimate my belts because they started slipping an screaming randomly. The belts were shot, worn out and cracked all to hell. That was a great price too! All together 233$

JMS is not only super professional in actually taking the time to show you what’s wrong with your vehicle, but they have really reasonable prices. Plus a nice waiting lounge as well with free drinks, candy an coffee.

Thanks guys, you’re the best. I’m going straight to you from now on.