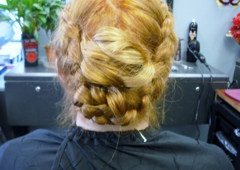 I have been in tears since Thursday afternoon because of the butchering job done to my hair. I went in with very clear pictures of what I wanted and tried to talk to Lenore more than once during the process to make sure we were on the same page. She just seemed to get more and more frustrated with me. Once it became clear she had screwed up the style I just tried for some damage control. She even called over another stylist who I can guess didn't understand the style I wanted either since it just kept getting shorter and shorter and shorter. It is hideous. Not to mention the insults I had to endure while I was sitting at her mercy, comments about how I must have to stay out of the kitchen because I eat too much! Absolutely unprofessional and uncalled for. By this point I was trying hard not to cry and just wanted to get out of there. I smiled sweetly, said it was fine and that at least I could wear a wig over it, paid (using a gift certificate), and left. I have been having major anxiety attacks ever since. I am so upset. I have gone to this place before and never had a problem. My children have come here, my husband too. But now, I never want to set foot in there again. A quality salon's ultimate goal is to help people feel beautiful and empowered. This salon is not only subpar in that regard, they are damaging to the confidence of its clients to the point of being abusive.

i have worked with these ladies for many years i recently retired after reading a few of the comments on here i would think that you would get all the facts before making statements ..and if a fight was started i can assure you that the manager was absent from the salon as she would not allow this to happen sounds like someone is pumping up themselves

I'd like to take the time to say thank you to Lin at Urban hair stylist she's been my hair stylist and manicurist for over 30 years, she continues to amaze me with her never ending knowledge in career field that she is so passionate about. Lin has done my mother, myself and my daughters hair numerous times always giving us the most current and update styles that fit each of our own personalities. Thank you for going above & beyond for my family and I. Beth Nipps

This is one of the consistent Hair Salons.

A great hairsytlist winning awards. She's had a constant staff with new ones coming all the time.

I was in Urban Hair about two saturdays ago to get an appointment . Their were two women in their fighting with another stylist I believe the stylist name was Crystal. The older women at the desk was shouting profanities at Crystal the another one grabbed this stylist by the arm the whole time the stylist did not respond but the other two were so un professional with their abusive language and assault on the stylist. She also had a client in the chair i am new to Pueblo and was looking for a full service salon after that experience and the unprofessionalism of the salon I would not recommend it to anyone, Who ever manages that place should be fired I am in that shopping mall alot and that place never has any customers Now I know why

I have my hair done by Crystal at Urban Hair she is a magnificent hair dresser She listens and does an amazing job. My only complaint is thew management they have nothing better to do than to stand around and talk about everyone who comes in the door. The manager Lynn and her side kick Anne are the two worst. She runs the shop with out any professionalism at all . Those two old gossips need to go and give the shop a revamp . Juan , Kira and Crystal are the reason that shop has any business at all I say out with the old and in with the new

I recently got my hair cut and colored by Juan, and my nails done by Kira. They are AMAZING! I was so happy with my experience there! They actually listened to what I wanted before getting started and didn't try to push me into things I didn't want! I wouldn't dream of going anywhere else! You have to try this place out!!

I get my hair cut and colored. They always do a great job and they are a fun place to go. I have had a lot of hair services done in my life and they definitely know how to deliver. My stylist was excellent!

I'm 20 years old and have had a lot of hair cuts in my life and this was one that was the WORST I ever hope to have for the rest of it. I had hair that reached the my waist I asked for a trim and she told me that meant 1/2 an inch. She proceeded to cut off 6 inches! Then she decided to give me huge layers where I told her I was growing them out. My hair looks ridiculous. There is a huge triangle at the top of my head and about four inches sticking out the bottom of the triangle without any blending in between. I would have someone else fix it but I'm afraid to loose any more hair. I have never been that picky and have always liked my hair however the stylist did it. But this is soooooo sad to look at. :(