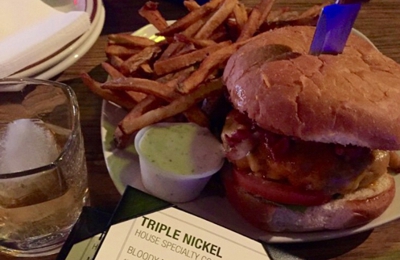 Triple Nickel has 38 beers on tap!

Love this place! The staff is friendly and burgers are a good pair with one of their many whiskey's on the menu.

The food was of the greasy spoon variety. The bartender and cook were rude and overbearing. Don't waste your time on this dive. I like dives myself. This one lacked any charm or atmosphere. It had none of that rustic appeal that so many of the older pubs do. It's not rustic, it's just trashy. New bartenders and cooks might make your experince more enjoyable. Throw in some some 409, bleach and a scrub brush just for good measure. Lot's of bleach!. Needs an all around over-haul, but has potential. I mean the business has potential, not the staff.

The Triple Nickel Bar is the source of many of the problems in this neighborhood. Not only is it a filthy, decrepit eyesore, but the reek of the place can cause your eyes to water from across the street. Patrons are loud, obnoxious, and belligerent, often screaming on the sidewalk outside for long periods of time, with no evident effort on the part of staff to try to control the situation. Patrons are also evidently over-served, as much of the crime and trouble in the surrounding neighborhood is perpetrated by seriously inebriated people who have just come from a night out there. We and several of our neighbors have had to call police and EMTs in the middle of the night to come scrape Triple Nickel patrons off the sidewalks in front of our houses or off our yards and porches. One ended up on the front steps of a terminally ill neighbor's house, yelling and screaming for forty-five minutes until police came. Many have left in an ambulance. Another recent incident involved an insanely drunk person who had just been at the Triple Nickel, then broke into another neighbor's house, vandalized it, and then proceeded to crawl into bed with one of their children. There are countless more examples of the trouble this place has caused to this neighborhood. This is not a 'hipster' bar. It is pure white trash.

I have been going to this great Mixed Crowd bar for over a year and the staff is THE BEST around ! ! ! Great drinks and a fun time.