General Info
Founded in 1971, Powell's on Hawthorne has grown into one of the largest used and new bookstore on Portland's east side. The store now covers more than 10,000 square feet of retail space and offers more than 200,000 used and new books on various topics. It carries a range of books on various subjects, including literature, mystery, cooking, sci-fi, fantasy, architecture, biology, gardening and world history, to name a few. The place hosts author readings several times each week in its Tabor Room. Adjacent to the reading space, readers congregate in The Fresh Pot, an inviting corner of the store serving delicious homemade pastries, coffee and other sweet delights. Powell's on Hawthorne also provides audio books, signed edition, digital versatile discs (DVD) and e-books to the reading community.
Hours
Regular Hours
Extra Phones 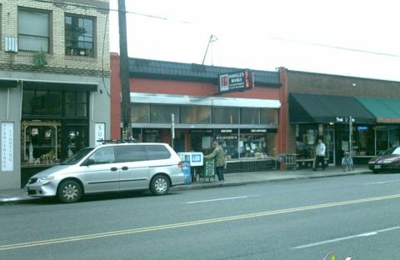 I went to Powells for a lecture. When I came in, the store employee told me that there was a coffee shop where I could take their books in and enjoy the milk and lasagna I had brought with me. I went into the coffee shop, took a couple of swigs of milk, and had to make an important phone call. In the middle of the phone call, the establishment's workers wave their hands at me, disrupting me during an important call. They rudely tell me to get lost, because I was drinking the milk I had permission to take in there.

Later, I go to the book talk. The room was horribly set up, and there are people standing, because there were not enough chairs. This speaker attracted 40 people, and it was pretty obvious that Powell's was pretty unprofessional. After the lecture, some of us are still discussing the topic. We go into the coffee shop, and the others have bought coffee. I have metabolic regulation issues, and I need to eat at regular intervals. I had my milk on the table (I wasn't drinking it), and had to have a bite of cheese for medical reasons. The worker came over, accosted me in front of a crowd of people - saying they already had told me once I couldn't eat there, and yelled at me rudely to leave the coffee shop. The truth is that they only made a comment about my drink, and I wasn't drinking anything.

I go and complain to Powell's manager, and they brush aside my complaint, telling me that they are unaffiliated with the coffee shop. That was not what I was told earlier in the day, when I was told that not only could I go in, but I could eat and drink in there. I let them know that they had lost my business, and they didn't say anything, and were onto another sale. I can tell you that I certainly won't be going back to either Powell's or the coffee shop in the near future. And I would urge you to shop at another place. All of my life, I have gone into coffee shops with beverages and sat down. None of them have cared what I drank. Furthermore, this was the least professionally set up lecture I have ever been to. They literally had to tear apart the shop to have the lecture even occur.

There are better bookstores, with better coffee shops, elsewhere. Why waste your time with Powells on Hawthorne?

Powell's touts itself as a used bookstore. In reality, maybe 1 in 50 books are used and the used books cost the same as the new books. The selection is great, and it is a blast to peruse the shelves for hours on end. But if you want to find a bargain, find it elsewhere. I usually find the books I want by going to Powell's then go online to buy them.
I have to say, I miss musty used bookstores with shelves and shelves of roughly organized books for a good bargain. If you're ever in Eugene, go to Smith Family Bookstore. That place is book love.