General Info
We are a family owned business that has been in existence since the 1950s. We are a real barber shop, where customers have been coming for years. It has become a tradition for families to pass down the barbershop experience to their own children. We have been able to provide quality cuts and the experience for years. Call us today for more information!
Email
Email Business
Services/Products
Brands
Tressa
Payment method
cash, check
Neighborhoods
Central Northeast Portland, Hollywood
Other Links 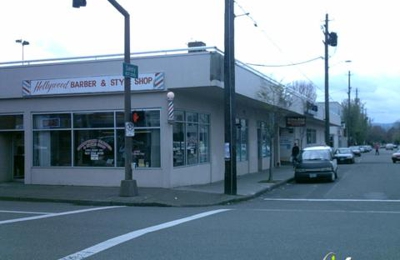 I recently moved here from California and came to the shop on accident before my meeting. The shop still has that authentic look and atmosphere that you just don't see anymore. I'm not a barber shop buff or anything, but i really did enjoy my haircut. I go there regularly now (about once a month). I go for two main reasons... because the price you pay is the haircut you get! And second, i heard that Pat (one of the barbers) used to give scalp massages with some device and it was real nice... but he doesn't do it anymore! So i always ask him for it every time i go in. So lets all ask him and see if he breaks!!! Its a good time... check it out.

I have gone to Hollywood Barbershop about 5 times in the last 6 months and never have received a haircut that I was completely satisfied with. This last haircut that I received 15 minutes ago has given me reason enough to never go back. First, let me say that they have always been nice and courteous but what really matters is the end result: satisfaction with the haircut.
I just had my hair cut by a woman who was unfriendly, but seemed like she knew what she was doing. Looks can be deceiving. I always assumed that cutting hair evenly was among the priorities of barbers, unless explicitly asked to do otherwise. Apparently not. My hair was left uneven, to the point that my brother's first response was to laugh and make fun of the bird's nest I was left with perched on my head. I am blown away by the lack of manual dexterity or deficiency of barbering skill that produced such a devastatingly bad haircut. I almost commend her for keeping a straight face while she finished her chop-job.
I could have cut it with my beard trimmer using my left hand and had the same final product.
I am not saying that you should'nt go to Hollywood Barbershop because I have had decent cuts prior to this national disaster. They are very friendly and even give free neck shaves between haircuts. I'll give them the benefit of the doubt and just attribute this disgrace to a bad day. Or maybe a shaky hand. Although there was no discernible tremor... And there's always the chance that she was fresh off the bus from beauty school and I was her first real haircut. Either way, it's ok, it's just a haircut.

I have been going to the Hollywood Barber Shop for over three years now, and I have received an amazing haircut everytime. Jim is always curteous and meticulous and I have recommended him to all of my friends - some of whom now see him regularly. Great value, nice people and interesting conversation. What more could you ask for in a Barber?