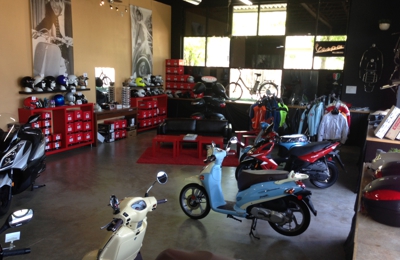 Both shops are super helpful and know a lot about motor scooters. I bought my first scooter from Columbia Scooters ten years ago and love it! I go in often and service my scooter with Vespa Hillsboro. Great shop!

I bought my Kymco People 50 cc scooter at the Hillsboro store. I loved the scooter, upon getting my motorcycle endorsement, I decided to upgrade to a Kymco Grand Vista 250cc. I have had both scooters serviced there and have got great service. I also purchased some good riding gear there and a competitive price. I would choose Columbia Scooters over any motorcycle shop, who don't seem in tune with scooters or have as much knowledge of them.

The prior poster had it right, and the first two reviews look like inside plants.

Asked them several times to get it running. Charged me for changing the gas, and yet every time I got it home it didn't start the next day.

They said I had told them I wanted it fixed for the lowest price, which everyone wants, but they didn't even fix it. They said it was fixed, but it wasn't at all.

Finally took it to a different shop in east county and they fixed it for $50. That was less than what Colombia charged me for changing the gas!!

Do not give your business to this company.

My recommendation is to go to a more name brand company instead of this one. I wish I had.

Were those positive reviews written by friends of someone works there? That wasn’t my experience at all! I brought a non-working old moped I’ve got from a friend to their shop and asked them to take a look at it to see if it can be fixed. I told them I know very little about moped myself. They seemed nice initially and told me it usually costs $150 to fix moped like that. After two weeks, nothing happened, I followed up, they told it needs a new battery. I searched the internet, found the battery, mail ordered it and brought it to the store, and they told me they started cleaning some parts, and the moped didn’t have a gas tank. They re-wired and hooked it directly to a plastic container with some gas in it, but something still missing and they don’t know what it was because the moped can start but can only go 23 mile per hour (someone else told me later that it’s supposed to be at least 32-40) and can only be operated when it’s cool. I researched the internet and tried to find a replacement tank, in the process, I came across some other parts people mentioned in forum that I might need, I printed out the information and brought it to the store, and they said ‘ yes, we’ll need that part too’. By that time, I started feeling that they don’t really know what’s wrong with the moped (when the owner’s manual for the moped is available on the internet for free, if they can just look it up) and they expected me (someone knows nothing about a moped) to find out what’s wrong with it, ordered all the parts just so they can charge me $75 an hour to put them on (they charged two hours for cleaning carb in the work order?). A few weeks past and I couldn’t find the replacement tank, they started calling me and said they are going to charge the storage of the moped if I don’t pick it up. I stopped by the store to pick it up, and they wanted to charge me the full $150 for ‘fixing’ it, they showed me it’s ‘working’ by starting it and circling it around their parking lot, even they had admitted earlier that it was not working properly with missing parts (which they could never tell me what they are), the oil was leaking, and the plastic can of gas was hanging loosely on the backseat, along with original cables and air filter they took apart but didn’t bother to put back where they belonged to. When I explained I should not pay the full amount for something not fixed properly, the owner got really nasty verbally and threaten to hold my moped and back charging me $10 a day for storage. I paid the full $150 and rode the bike home. It died after 1 and ½ miles. I called the store, left a message, and never heard back from them. Will you bring your bike to places like this? I’ll leave that to your discretion.

Andy, & Tim, as well as the other employees at Columbia Scooters were absolutely awesome! They helped me get financed, pick out gear, and custom painted fenders and box. They were all very knowledgeable about scooters and telling me what I need to know, (since this is my first one) about driving and how to take care of my new ride. They are friendly, support local gear, and are wonderful to direct someone to another scooter store if someone isn't finding the ride they were looking for! I highly recommend going to these guys for your new scooter purchase or gear! Thanks to Columbia Scooters I am now cruising the streets in something that saves on gas, and doesn't emit as many emissions as my SUV!

I was amazed with the how much the staff knew about their products. I came in just looking and ended up finding the perfect scooter. Great Service, friendly. I just love my little kymco scooter!!