If you can dream it, we can build it!

General Info
We Specialize in Pool, Spa & Patio Remodeling! In addition, outdoor Kitchens, Pavers, Pergolas, Installations & Repairs. With over 20 years of experience in South Florida, Pool and Patio Design Inc. has the skill and expertise to assist you with all of your pool and spa needs. We service all of South Florida including: Fort Lauderdale, Boca Raton, Deerfield Beach, Coconut Creek, Delray Beach, Pompano Beach, Lighthouse Point, Parkland, Wilton Manors, Boynton Beach, Wellington, Coral Springs and the surrounding areas. From initial planning to completion, our remodeling experts provide stress-free service every step of the way. Safety always comes first for our clients. While we are on site, you can have peace of mind knowing that our crews place a priority on keeping the area clean and handling materials and tools with care. Our team will treat you – and your property – with the utmost respect. At Pool and Patio Design Inc. we are deeply committed to giving you the pool of your dreams. Our custom pool decks are beautiful, durable and integrate seamlessly with your backyard landscape. Whether it’s splashing around, soaking up the sun or taking a refreshing dip, when you choose Pool and Patio Design Inc. you can look forward to creating memorable moments with your family and friends for years to come. Be sure to browse through our gallery for more ideas on pool remodeling.
Services/Products
Our Expertise Pool &Spa Remodeling Water Ponds Waterfalls Retaining Walls Paving: Brick, Travertine & Marble Driveways Outdoor Kitchens Pergolas Pool Resurfacing Pool Equipment Installations Pool Repairs Pool Deck Renovations Outdoor Kitchen Installations Adding a Custom Swimming Pool Waterfall
Payment method
visa, debit, check, discover, amex, mastercard
Location
4081 N Fed. Hwy. Ste. 10 Pompano Bch., FL 33064
Neighborhood
Pompano Beach
Languages
English, Spanish
Other Link 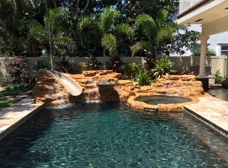 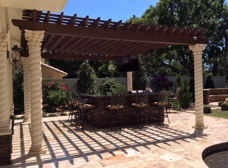 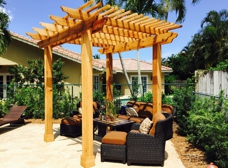 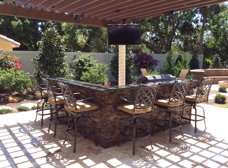 Leon and his team did an awesome job on our backyard renovation. They built an amazing outdoor kitchen, covered patio, and re-paved our pool deck. They were courteous, timely, and always forgiving when we wanted to make a change on the fly. Leon knows his stuff and was always helpful when we had tough decisions to make. I highly recommend Pool & Patio Design and wouldn't hesitate to use them again.

For 30 years, the experts at Patio & Pool Design have been designing, constructing, remodeling, across the greater Pompano Beach, Florida region. We have a team of highly experienced designers and professional outdoor living Experts who are sure to exceed your expectations.

We’re masters of the backyard renovation process, from designing ornate and privacy-enhancing pergolas to arranging and building the outdoor kitchen of your dreams. No detail of your outdoor landscape is overlooked when you partner with the professionals at Pool & Patio Design.

All the Crew were polite and very neat . No loud radios work was done very fast letting enough time for things to set and dry .I love my pool now, the work that was done was perfect. No problems . I got everything i signed up for. I have told my family & best friends what a great work quality Pool&Patio Design did ! Leon is Real no Baloney! I give Pool& Patio Design 5 Stars ... They are the best
-RON S

Leon and his team were professional, courteous and responsive to our needs. The pool and patio tiles came out better than we envisioned.

I normally do not write reviews but I do read them not so much to decide whether I'm going to use that company but to help decide after I meet the representative of the company.after reading the reviews written by other clients I wanted to express the satisfaction we had for oceans remodeling the guys and the work they did on our backyard.I would recommend over and over again.

Our swimming pool was looking a little worn and dilapidated. Oceans Remodelling Group did a superb job of redesigning it and adding a wonderful deck area. We're in the pool all the time now!

I'd always wanted a waterfall in the backyard and thanks to Oceans Remodeling Group I now enjoy the sound of cascading water in the most natural looking pond which blends in with the landscape to look like it's always been there.

My neighbor and I chose to use Ocean's Remodeling Group because of the excellent workmanship they had done at a home down the street from us. We admired it for about a year and the homeowners literally raved about the workmanship and how satisfied they were. They stayed true to form when they did our homes. We chose travertine marble pavers and they placed them with remarkable cutting precision cutting corners and edges to make certain that all fit and the pattern of placement was literally artistry. My neighbor and I highly recommend them.

We rent out our property and were looking for a company to take over the cleaning of the pool. Having signed up for the full service and maintenance package we just wanted to drop you a line to thank you for the prompt, efficient and friendly service that you provide. We no longer have to worry about cleaning the pool ourselves between changeovers and during longer stays, as everything is taken care of. Any problems and all it takes is a quick phone call. Couldn't ask for more.

We're not gardeners and were struggling to know which plants to choose and to keep those that we had bought alive. We contacted Oceans Remodeling for help and they straight away carried out an analysis of the soil as a starting point. They then suggested a planting and maintenance program which we were more than happy to accept. Our yard is now looking blooming good! Great job guys.

Our son was moving back home and we wanted to finish the basement so he had some privacy. Oceans Remodeling put in a beautiful epoxy floor which has totally transformed the basement and made it an attractive space for our son to move into. We'll definitely be recommending your services to our friends and family.

We were looking for some lighting to add to our yard and to show off some feature plants. Oceans Remodeling gave us a visit, made several suggestions, and carried out the job a week later. It looks amazing and we're so proud of our yard now. Thanks so much for your efforts.

Having moved over from the UK we were certainly not used to maintaining a pool. However, with the pool service provided by Oceans Remodeling everything is taken care of and all we have to do is enjoy it! We chose the full service package and are very impressed with the efficient friendly service. Would highly recommend you to our friends, any day.

It is with great pleasure that I am writing you and your company this letter. I have lived in South Florida all my life and had my fair share of experiences with various builders and contractors. However, the remodeling project I contracted with Oceans not only met but, exceeded my expectations.

During the initial sales meeting I was met with one of the business partners who explained in great detail the scope of work I needed and provided me with all the information I needed about Oceans Remodeling and material options for my project. I then decided to research the company via there website which further illustrated the quality and scope of work Oceans Remodeling produces. I decided to meet with the salesman in the showroom as suggested by the staff so I could see all the materials in person. While the showroom was vast and had more samples then I knew what to do with, the office staff was able to steer me I the right direction and offer me guidance. They also showed me actual photos of projects that used the materials I liked. I left feeling confident and informed about all aspects of my project.

Your staff was both professional and excelled in customer service. The office team made sure to always keep in contact with me during all phases of the project. Prior to the start of my project, Oceans project supervisor and salesman met with me at my home to walk through my project before any work was started. The project began and finished in the amount of time I was told; once they began my project, they did not stop until it was completed.

After everything was complete, I received not only one but two calls from both the office and my salesman to make sure everything was done to my satisfaction and that I was welcome to call them anytime should I have any further questions. I was not asked to write a letter of recommendation and me simply being happy with their work was all Oceans Remodeling was concerned with. I would recommend this company to anyone who is seeking quality work.

Beware, work was done but permit cannot be closed out. They did not include work that needed to be done on the swale (they claim that this was a new City requirement). I asked for a quote on the additional work, but was told had to pay in full first. I did and then never heard back. A month later the secretary called threatening me about the permit expiring, I told her that I asked the sales guy for a quote, but she said he was fired. She said she would get on it, then she was fired. A month later, the owner, Leon Levine called bullying me about the permit. Told him it was not in the original contract and asked for a quote to get it done. He sent some people by but then I never received anything from them. Just called today to get mailing address for a letter I wanted to send them, Leon got on the phone and would not give me a physical address, only an e-mail. Drove by the address on my contract and it's not a real address. After I e-mailed him he called me ranting and raving.

Checked with the City and since they pulled the permit, they are responsible for completing the work as specified on the permit which they didn't do.

Bottom line, work was done, materials used are not the best (corners cracking off pavers), and follow through may be an issue.