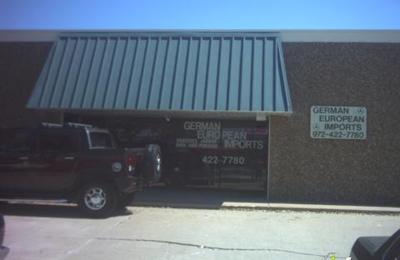 I recently found this repair shop after bad experiences with the dealer and other repair shops. I brought my mercedes in to replace the catalic converter and they saved me over $1000.00 dollars from the quotes that I was given by other shops. They informed me that because of where the break was that it was on recall and I could get it replaced for no charge. I contacted the dealer myself and they wanted to charge me a check out fee before they replaced the part. I went back to German European Imports and they brought my car to the dealer for the repairs. I have had no problems with the car since and I am gracious for their knowledge and honesty. I will continue to bring my car to them rather than the dealer.

I found this shop a few years ago when I had a mercedes,I recently bought a BMW,and have been bringing my cars their ever since. They are able to diagnose my problem quickly and provide reliable service. Affordable prices, great service.

dont belive what i just was reading. i bring my old bmw since the last 15 years in this shop. its old, but sam and his crew tread my old car like new. after all this years there keep it going. thanks very much. and, sam, beware of coustumbers who just wont to harm you
greetings pv mike

I found these guys from a guy that checks out cars prior to purchase. They have been working on my cars for at least two years. They have always been very reasonable and the work has been excellent. I have referred several people and they have all been thrilled.

I wanted to give zero stars, but couldn't. These people are crooks. They cannibalize parts from your vehicle to reuse elsewhere. I took my bmw in to get the driver's seat fixed. It needed a new cable.

I dropped the car off before work, and they drove with me to work then took the car back to the shoppe.
At the end of the day they picked me up in another customer's car. I know it was because when we pulled up, the owner was arriving. She and I walked into the shoppe at the same time. The driver ( in her car) didn't realize she was there, and drove it to the back of the shoppe. The woman commented, I thought I saw my car.

Since I was ahead of her, I paid, and got my keys and left. As I was getting settled in my vehicle, I saw the same car that they picked me up in, coming to the front of the shoppe. The woman came out and got in and drove off.

Anyway, if that wasn't enough, I noticed that my check brake light indicator came on as I drove off. There were no issues other than my broken seat which was broken by Eurosport Automotive on Coit. What bad luck, huh?

I turned around and went back to the shoppe and asked if they could replace the bulb. The tech came out, and said the bulbs may have gone out because the car was sitting out in the sun...Okaaaay. This is no joke.

He took the car to the back, and reappeared moments later. I paid $14 for the bulb, and was relieved that was done. He told me that the plastic housing for the light is so flimsy that the light indicator may come on again. I could see that the brake light was fine when he drove up.

Shortly into my ride home, the check license plate light came on. So he took the bulb from the license plate socket, and swapped out the blown brake light. I was done because I knew they were in over their heads. I concluded that they took the good brake light out of my vehicle to address someone else's issue, leaving me with the blown bulb.

I decided to forget about these ""dealership alternative shoppes"" and went to Classic BMW. They changed out the bulb without any issues.

Oh, and the passenger seat is messed up too. These people cannibalize parts, so unless you want a hassle or have your car driven to pick up other customers without your knowledge, DO NOT USE THESE PEOPLE, you will regret it. I certainly do.

These guys are always friendly, helpful and honest. They really try to understand the problem before trying to fix something, which means they aren't guessing. I've taken my 3 different BMW's in for maintenance, and varied service and they have always treated me fairly.
A couple of times I've taken my car in and they've spent 30 minutes evaluating the car.. only to turn around and say they thought it was fine, come back in 6 months. Most other shops would have taken my money then and later.

Have taken my Mercedes there for years and have had the best service. Very knowledgeable and able to pin point the issue even over the phone. Very fair price for excellent work.

I took a BMW to be inspected prior to buying, and these guys did NOT disclose several issues. It had a bad radiator, out of date software, leaking valve gasket, missing headlight sensor, torn thrust arm brushinhg... There's a lot of stuff wrong. These guys only flagged the wipers, a ""small"" radiator leak and missing washer fluid reservior cap.

They did an oil change, and left the cap loose. This caused oil to leak and create a mess! I had to take the car to a dealership to get $3,000 worth of work done. Had I been given a truthful assessment, I would not have purchased this car.

They fixed my car when no one else could and they price they quoted me was how much it cost not a penny more. From now on I will only bring my cars here, especially after the horrible experience and rude service I have gotten at other repair shops.