General Info
Langenwalter technicians are experts at color correction. Bleach spots and other permament discolorations on your carpet can be corrected at a fraction of replacement costs. And will look much better than a patch. The chemical or substance that caused the problem will be neutralized and then the color will be restored to the original color. Pet stains can be corrected in a similar way. By first neutralizing the pet urine, then fixing the color so that the spot is virtually unnoticeable. You can email us a picture so that we can give you an estimate.
Hours
Regular Hours
Services/Products
Bleach spot correction, Carpet Dyeing, Carpet Repair
Payment method
amex, visa, check, discover, mastercard
Neighborhood
The Canyon
Amenities
Email estimate on spots. Call for the email and we will look at the spots and send you an email estimate.
Other Links

We correct bleach and other discolorations on carpet 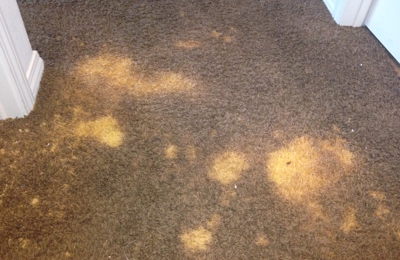 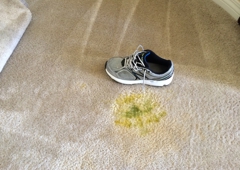 Lagenwalter Carpet Dyeing is a franchise business. Robert might actually be the owner of the Franchise I called. He doesn't do the work himself. I asked if Juan, scheduled to do my job was experienced enough...this is went things started to get awkward. Bottom line is he sent out an inexperienced employee to do the quote and Robert didn't trust his own employee's estimate or his assessment of my carpet. Sounds like he didn't trust Juan either. He was so ""nervous"" (his word), THEY CANCELLED THE JOB! If they can't trust their own employees to do an adequate job, how can you?
I ended up using Cali Carpet instead. The owner does his own work. He has 12 years experience and did an awesome job...for less money!

The following are actual emails:
Dear Mr. Langenwalter,
I have an appointment set up for Friday, June 19th for carpet cleaning and spot dying. A very nice young man came yesterday to my home to look at the carpet and give me an estimate for the job. I live in a townhouse and the carpet area is just the stairs and 2 bedrooms upstairs and a small hallway. It is my daughter's bedroom that needs the most work. He looked the entire carpet area over and told me everything was totally fixable and gave me a quote for $300 for both deep cleaning and dying the trouble areas. He said the job would take approximately 5 hours. There was a question initially if my carpet was dyeable, but it was determined to be 100% nylon and dyeable.
This morning I called and talked to Robert to set an appointment for Friday. To be honest, I thought he was the owner of the company until I read your website. I was going to cancel the appointment after I thought about our conversation. Without looking at the carpet, he felt the estimate was too low and that there was too much damage, he didn't think your company should have taken the job. Interesting assessment since he wasn't the one who came to my house? He said the job should only take 3 1/2 hours, again without knowing what the job entails. He kept repeaing those sentiments over and over even after I asked him if he would rather not do the job.
After reading about your company, it sounds very impressive and I am sure your people can do a great job. To me, $300 is a lot of money to pay, but worth it if you can make the carpet look clean and unstained. However, I am still uncomfortable about the conversation I had with Robert this morning. I told some other people at work this morning what transpired on the phone, and the consensus was that I should cancel this appointment.
I decided to write to you instead, as the owner of the company. I would appreciate it if you could let me know what your company can do for me, or not regarding this situation.
Thanks,

We are also uncomfortable.
Your appointment has been cancelled.
I am sorry we could not help you.
John
JOHN LANGENWALTER

My email back to John:

So...let me get this straight...you are uncomfortable spot dying and cleaning carpets? I thought that was your business??

You send someone to my house for an estimate. He doesn't even think my carpet is dyeable after he writes a quote. Turns out, lo and behold my carpet is dyeable. Some other guy who never saw my carpet decides over the phone he didn't charge me enough and is ""nervous"". I write you a letter and you cancel the appointment because you are ""uncomfortable"". This is one of the all-time strangest experiences I have ever had.

Not to worry. I had someone else come today for a quote. A wonderful gentleman who owns his own company and has been dyeing and cleaning carpets for 12 years. Way more knowledgeable than the person that came from your company. No comparison on that point. He does a huge commercial business, teaches classes on the subject and guarantees and does his own work. He is going to do the same job for $250. Lucky me. I got someone I can trust and I get to pay $50