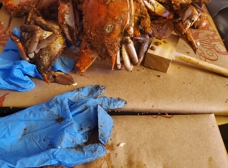 I've gotten crabs here numerous times. They even remember me when I pull up, by name!! I ordered a dozen small males, close to closing time. They were just getting done when I pulled up. They had some large that didn't have an order for so they threw them in. Omg, so heavy especially for larges this early in the season. Awesome taste, great seasoning. It takes a lot for me to comment online, but I HAD to give a great review!!!

My first time ordering crabs here on a beginning of summer weekend. The three guys were getting things in order as the shack was just opening. He took my order after explaining prices and options. We left and came back to pick up our steamed crabs and pay (cash-only).

The steamer was unloaded with our crabs into a bag, shown to me, I paid, and off we went. About 10 minutes later they called me and said that they gave me the smalls instead of the large that I paid for and to come back for a credit or refund for the difference. I may or may not have noticed they were small, but there was a mistake and they made it right. The crabs were good quality, they put a lot of spice on them.

Overall, this seems like a good place to try.

I ordered a bushel of large crabs for Father's Day and was extremely disappointed. A number of crabs were filled with mud and inedible. On top of that, the crabs were not large - they were small - I would hardly call 5 1/4" crabs on the large side. Not worth the money at all.

I ordered a half bushel a few weeks ago. After getting the crabs home and started to eat them I was a bit turned off. Many of the crabs were light with hardly anything in them. The half bushel was supposed to be large and medium mix. I'm not sure where the large and medium crabs were because most of what I brought home were barely legal in size. This is the first time I've gotten crabs from them and probably will be the last. Sorry, not worth the money.

I'll never buy crabs from here again. I ordered two dozen of their "Monsters"; they're supposed to be Extra Large/Jumbo size, but nearly all of the crabs were BARELY 6" point to point, with only two at 6.5". They were light, and I think these people cook dead crabs because we found several that were brown inside and totally inedible. I gave them another shot a month later because they were close to my house...big mistake. Same problems. And FYI, THESE ARE NOT MARYLAND CRABS. They're from Louisiana; one of the most polluted states in the nation. I'd go back and say something, but these people don't care. They have a real attitude. There's a reason they take cash only. I, for one, will never give them another dollar of my money. You shouldn't either. Consider yourself informed.

Good Evening, Violet. We apologize for your experience with She's Got Crabs. After being told the crabs were from LA, you still took them home. We like to keep our customers informed, during different times of the year we have to get crabs where we can and we sort out the crabs and give you the best available on the market. Whenever there is a problem we try to replace or refund whatever is left and work with the customer. We do not pre-steam any of our crabs, we steam to order and steam right in front of our customers eyes. Again, we apologize for your experience. Enjoy the rest of your summer. Thank you!