We Invite You And Your Pet to Tour Our Facility Where Our Friendly, Knowledgeable Staff Will Meet All Your Veterinary Needs!

American Board of Veterinary Practitioners 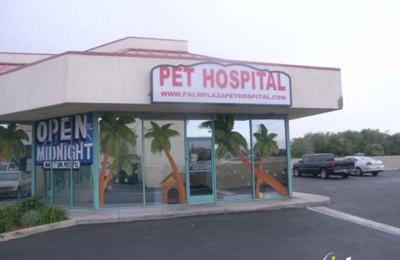 I am the daughter of a veterinarian and worked with my dad until I became a RN. I know veterinarian medicine, and THIS FACILITY IS NEXT TO PERFECT. I have large n extra large breeds that are somewhat strong willed. 1 English Mastiff, 1 German Shepherd, 1 Siberian Husky, n 1 Pomeranian. Dr. Stone actually laid down on the floor next to my mastiff to let him get comfortable. It was great. They have gone above and beyond for us. You can NOT make any bad decisions reg6 your fur babies here.

You get a very good treatment for your pets (love ones) I recomend Palm Plaza to all of you out there, I can't wish for a better place to take my dogs or any kind of animal, they are the BEST! Their staff are very knowledgeable and friendly. They have a vaccine clinic day that is offers to everyone I would recommend that as will. This Hospital is one of a kind up here in the AV!!!!! so go give it a visit

O MAN WHERE SHOULD I START THIS IS A COOL PLACE TO BRING YOUR PETS. I ACTUALLY READ ALL THE GREAT COMMENTS AND DECIDED TO BRING MY CAT AND I HAVE TO SAY THAT I WAS IMPRESS BY EVERYTHING! I WILL BE BRING MY PETS HERE FROM NOW ON. AND YOU SHOULD TWO!!!

THIS IS A PERFECT PLACE TO BRING YOUR LOVE ONE'S ITS NICE, CLEAN, REALLY PROFESSIONAL, ORGANIZEAND, AND THIER LOVE FOR ANIMALS IS UNEXPLAINABLE THEY WILL SHOW YOU THAT THEY LOVE HELPING ANIMALS AND ITS NOT JUST A JOB FOR THE MONEY!!! I LOVE CIMONG HERE I NEVER HAVE A PROBLEM WITH THEM. ITS ALL WORTH IT!!!!

THANK YOU SO MUCH FOR YOU GREAT WORK AND LOVE FOR ANIMALS!!!!!!

i think its lovely and cute how my pet reacted when i took her to plam plaza pet hospitl for the first time ever she was all happy and excited. she was getting alot of attention from all the staff. they were friendly and made my pet have one of the best visits in her life. she was not scared at all she has never reacted like that befor. so i knew that she like this hospital to me is a great thing for animals to like to come to the vet. and this is something you dont see all the time!!!

thier so much to say about this hospital, is INCREDIBLE!!!! right when you walkin you can tell that is will takin care of everything is neat, professional, and the staff our REALLY nice and friendly. i dont mind bring my pets here. thier work is 100% completely given to you and your pets. its amazing how they care for animals so much and our willing to go an extra mile for them.....

I JUST WANNA SAY THAT THIS HOSPITAL IS THE BEST PET HOSPITAL I'VE EVER BEEN TOO. THE PEOPLE ARE NICE AND PROFESSIONAL. THIER JOB IS WILL DONE AND THEY ARE THERE TO HELP ANIMALS!!! I'VE NEVER SEEN A GREAT HOSPITAL LIKE THIS ONE EVER IN MY LIFE!!!! I RECOMMEND PALM PLAZA PET HOSPITAL TO EVERYONE THEY ARE LOCATED IN 2501 E Palmdale Blvd, #D, Palmdale, CA 93550.

THIS IS A GREAT PET HOSPITAL EVRYTHING ABOUT IS GREAT!!!! I WILL TELL EVERYONE AND ANYONE ABOUT THIS HOSPITAL. WORDS TO DESCRIBE THIS HOSPITAL IS PROFESSIONAL, NEAT, ORGANIZE, HELPFUL, AND REALLY CARING...THIS IS AN AWSOME HOSPITAL FOR ALL ANIMALS!!! :D

i've like to thank plam plaza pet hospital and thier crew for thier great work and help!!! i didnt know alot about dogs but i walk in and they told me everything i needed to know. now my pet is getting all the help and attentionhe he needs ... its awsome and amazing how an owner can help thier pets in many ways and not even know it...

thank palm plaza pet hospital for ALL YOUR GREAT WORK!!!

i been coming here ever seen i found out about this place from my best friend and i have to say that this is a great and comfortable place to take my pets. my animals love coming here and they dont seem to have a problem with the staff at all. they love them and the staff love our pets. everytime we visit them the visits go so will and by so fast. i dont mind coming here at all the place is nice will takin care of and really clean. the staff are nice and professional and they will answer all your questions and concerns. they take the time to make sure you understand all the instructions correctly.

love, love, love ppph is a great hospital to take your pets. they see all kinds of animals and the clinic, staff and thier professionalism really impressed me.you can tell they love thier jobs and thier good at it. you can also noticed that they love helping out the animals and thier owners and they dont just do things just for the money. and its nice to know that thiers good ppl out there just like them...

so i was looking for a vet. hospital to take my lovey pet i came across this hospital that looked every nice and got my attention... i walk in the staff were really nice and professional. i was seen right away with no an appointment. the doctor was really nice and she answered all my questions and told me things about my pet that i had no idea about. now in days is really hard to find a pet hospital that are clean, nice, professional, and are willing to help you in ever way that they can and know what there doing. my pet was reacting like if she new them and for my pet to look that safe and comfortable is a BIG puls :} i can say that this hospital is a great hospital and i will be coming here from now on... i highly recommend this hospital to everyone!!!!!

If I could rate this hospital it would surpass 5 stars thank you staff for being so compassionate and understanding with a pet owner I didn’t feel bet littled I felt understood.

I like the staff they are very helpful and are always willing to go the extra mile.

I will tell everyone to come here.

Thank you , thank you so much I would not know what to do if you weren’t here.

I love how you take care of my Paws , she lows your staff.

I have taken all of my dogs here since the early 90's, & have always gotten kind, compassionate professional care here. The offices are clean, employees ALWAYS helpful & prices are VERY reasonable! I have taken my Service Dog to Dr R ever since he was 11 weeks old, & he's still going strong even now @ almost 11 years of age! His son has even made it through parvo with Palm Plaza's caring concern! I highly reccomend this facility to everyone that wants their pets to get better & thrive!

The staff and vet techs were so helpful I felt very comfortable with my pet being seen by them They treated my pet like family. My dog was so calm being seen there its like she knew them already no stress at all I love the staff and vets and recommended them to all my animal lover friends.

Palm plaza pet hospital is my number one pet hospital I have been coming here since 2007. I had also volunteered and work here be for and still up to this day this place is still my favorite place to bring all my pets. Is will taking care of and very organize all their staff our really friendly and very helpful. They will help you in every way that they can and they will help everyone and anyone. Every single staff that works there knows how to do a great job. I can guarantee you that you will be extremely impressed with the care and services in palm plaza and their wonderful staff. For anyone that is looking for a great and one of the best pet hospitals to take their pets I highly recommend this place. I couldn’t and will not take my pets anywhere else other than palm plaza pet hospitals it’s also knows for helping all kind of animals and for having one of the best staff ever.

Thank you palm plaza pet hospital and all their staff for being there and helping me and my pets.

Before I found Palm Plaza Pet Hospital, I tried many different hospitals in the Antelope Valley and was not very happy. Then I came across Palm Plaza and am overjoyed at the quality of care and service I get there. I am now a permanent client and would not take my pets anywhere else.
The staff is very helpful & Dr Rosenaur Knows her stuff! I would HIGHLY RECOMMEND this hospital for your pets!

I have been using this pet hospital for a few years and until recently I have been happy. Over the past few months I have problems with multiple vets and both of my dogs.

I took one pet in for her shots, the tech asked me if I wanted the bordetella. I told her I want her to have all the shots. So she asked me again and I repeated my answer. So we ended having a small argument in which I told her my dog spends a lot of time with other dogs so yes I want it. A month later my dog got kennel cough and I found out she never received the bordetella.

My other pet was tested for hypothyroidism. I went in for another reason and asked about the test since I had not heard from Palm Plaza. A vet spoke to me, but never really explained anything. Told me just to give her meds and bring her back in month. So I was left a little confused. I went to High Desert today for another reason. They looked at the results from the test Palm Plaza had done and saw she has had an infection for the past three months. So either the vet has no idea or they did not even take the time to look at the results. Either way I think they should have caught that. I am very angry and I will never go back.