The Lawyer You Want to Know. 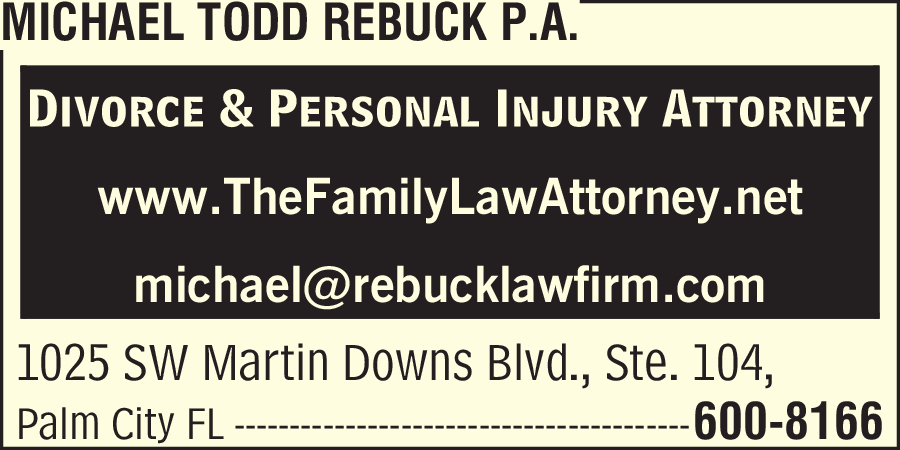 When I went to my first consult with Michael the attorney. He made me feel comfortable and that I was the most important client he had. I would recommend him to anybody and everybody that would listen to me.

I am very pleased with the services that I have received from Attorney Michael Rebuck. Several people that I know highly recommended him & used his services for their divorce.

During the entire procedure, he made me feel very comfortable in his office and explained every step that we needed to take for the divorce. I highly recommend him to guide you thru this difficult time.

Top notch attorney!
I found Mr. Rebuck's listing here on yp and am so grateful for his help. Once I spoke to him I immediately felt confident I made the right choice as he was both knowledgeable and professional and a pleasure to work with. He guided me every step of the way. Thanks again for all your help.

Attorney Michael Rebuck worked tirelessly to help me through a difficult custody agreement. Do to his efforts I was able to get a favorable agreement and peace of mind. Mr. Rebuck is a kind hardworking lawyer that will put 100% into any case and will be a Pit bull in the court room to ensure an outstanding result for his client.
- Tina B.

I am very pleased with my results of choosing Michael Todd Rebuck P.A. My ex-husband, in his desperate attempt to avoid child support, stalled out our divorce for over two years. He “claimed” to only make $100 per week and was hiding money. Mr. Rebuck took my case, even though I didn’t have the full retainer. In less than a year he accomplished more than my previous lawyer had in two years. He showed the courts how my ex made over $3900 per month just working 30 hours a week and was capable of making more. I was awarded the proper amount and the arrears he hadn’t paid in in over 4 years thanks to Mr. Rebuck and his meticulous attention to details.

Mr. Rebuck is a fine example of a how an Attorney should treat his client. He always stated, “I work for you,” and he made me feel this way. He promptly returns phone calls, when available, texts and emails. Sometimes his response is he is busy but then would give a time he can communicate and respectively keep his word.

Michael is by far the best attorney in the tri counties. I have used his services and his expertise, patience, and knowledge has exceedingly surpassed my expectations. He is to the point and gets the job done!!! I've have used him for years and he has always had my bad and is a great person so is his staff.
Michael always made me feel like had control over the situation and I had nothing to worry about. Trust me he is the attorney you want I've done the leg work he is the best around. You wont regret it. He is representing me now and I would recommend him to everyone including my friends!!

Provided my family with years of stellar legal representation resolving a long-list of difficult Family Matters. So grateful for this lawyer's perseverance. Goes the extra mile for us. Never an issue contacting him or getting called back. Answers his phone on weekends and holidays. Who else does that?

Terrific experience with Mr. Rebuck. Did a great job getting everything done for my divorce and helping me every step of the way! Always returned calls. Kept me knowing what was going on. He always made himself available! Thanks A+

This attorney is the best attorney to get if you want a bulldog and want to win. The moment I met him and compared to others I knew he was the one for me He has been so patient throughout this whole process and very thorough. luckily my husband had a change of heart.

Michael is THE best attorney I could have asked for to handle my divorce. Divorce is hard enough, but when you have someone like Michael on your side, he makes it so much easier. My divorce was finalized within 10 weeks. I can't believe it! If you want a good attorney on your side, go with Michael!! :)

I am so pleased to have retained Michael Rebuck as my family law attorney. From day one, he took control of my case and got the issues resolved. There were many problems dealing with the mother on my case - she even left the state - and through it all Michael helped me with divorce, child support, and everything else. I had to chase her down for income withholding multiple times. He got it done. She showed up back in Florida making demands, and he dealt with that, too. He takes my calls. He calls me back. He explains everything. He tells me what he's going to do and then he does it. Thanks Michael!

I owe Mr. Rebuck a huge amount of gratitude for his handling of my divorce. My ex-husband was difficult and irate through the entire process and Mr. Rebuck sheltered me from his actions and protected my interests the entire time. Mr. Rebuck is professional, experienced, and a great advocate for his clients’ welfare. Thank you so much for everything that you did to help me!

Mr.Rebuck is a great attorney to use for divorce. He was very helpful and will always keep you well informed about your case. Thank you .

Mr. Rebuck is a wonderful attorney ! Thank you so much for helping me and my children through this difficult time. I don't know what I would have done without your guidance and support. You were always just a quick phone call away so I never felt alone through this process. I can not thank you enough!

Mr. Rebuck is an amazing attorney. He is always there when I need his help and advise. He responds to any and all concerns PROMPTLY. The thing that I respect the most is that he keeps me focused on the truth of the matter...which is always doing what is in the best interest of my children. His moral compass is on point. With two successful mediations, I never had to step foot in court. We always took the high road and in the end it worked out in our favor! I am very happy with his services and would recommend him for help navigating time sharing, enforcement, and modification issues.

Michael Rebuck is a wonderful family law lawyer! Knowledgeable, hard working and very flexible. I am so grateful to have hired Michael to help win my case. He was ALWAYS there when I needed him and it gave me peace of mind knowing he had my best interest at heart! You can tell Michael loves what he does and he adds a personal touch with his firm that makes you feel at ease! Thank you again Michael for everything!

As a lawyer I found Mr Rebuck understanding, forthright and very positive. He has advised me this past year when I needed the most relevant advice and I deeply appreciate his time and efforts in directing me with my various legal issues. Mr Rebuck is highly communicative and accessible and one of the most pleasing aspects of his professionalism is his quick and informed response when I leave a voicemail. I listened with interest to his weekly radio broadcasts and am pleased that I contacted him to help me. Thank you Mr Rebuck and I look forward to working with you in the future.

I was so frustrated with my situation before I met Mr. Rebuck. He took the time to review my case with me and established a plan of action that ultimately worked out in my benefit. Looking back at everything now, I can only say THANK YOU to Mr. Rebuck for not only being understanding to my disposition but also for stepping up to the plate and taking care of my legal matters with the utmost professionalism. I will most definately keep him in the top of my contacts for future reference. I would recommend his services to anyone with a need for a family attorney.

Mr Michael Rebock is an exceptional lawyer. I didn't Gabe much money and he was able to work with me through payments . He really cares about your situation and being a father himself he understands what you are going through. He was inexpensive as opposed to other lawyers by far and he's settled my case without me ever even stepping in the courtroom. I am so glad I picked him to represent me as my lawyer. I can now start enjoying my life with my daughter. I now have 50 / 50 custody and I have to pay no alimony. I know that if I need a lawyer in the future then he is the one that I will turn to without a doubt.