General Info
Maaco Collision Repair & Auto Painting is America's #1 body shop. Maaco repairs accident damage, dents and faded paint for drivers across the country, restoring the safety and beauty of all types of vehicles. Let Maaco transform your car with a new coat of paint, and soon you'll be driving the car you always wanted. Maaco expertly does away with dents, dings, and accidental damage. Our standards are simple: repair cars so expertly that no one can tell they were ever in an accident. We guarantee our auto body repair work. Call Maaco first for your auto body repair and auto painting needs.
Hours
Regular Hours
Services/Products
Brands
Quick Turnaround
Payment method
all major credit cards, amex, discover, master card, visa
Other Links 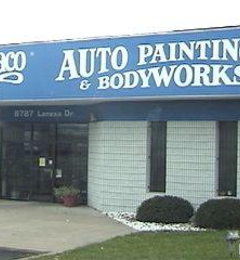 My 2000 camry was a mess. In bad need of a paint job I took my car to Maaco. I got a great paint job and was happy with the price. A+ service.

If you're looking for an affordable way to make your ugly car look good, this is the place. The sales guy answered all of my questions, scheduled me in and even gave me a ride home. My car turned out exactly as promised. Probably saved myself thousands.

Do not go to this location. They have terrible customer service. We had them fix our door and front fender, and now our car leaks when it rains. They refuse to even look at it and claim that nothing they did would cause this.

Maaco has excellent prices and deals that work for any vehicle. I had a 96 Mazda that paint had faded so I bought the $400 paint job that came out great and I spent $1,000 to have my truck painted with a bit higher end paint along with body prep. They also painted my Jaguar and it came out better than the factory paint on a $80,000 car. Good people, good quality and good at explaining the difference between a $400 paint job and a custom paint job for an expensive luxury car. You get what you pay for so don't expect a miracle unless you are willing to pay for it!

This Maaco shop did an outstanding job on my son's '95 Vette. It needed some body repairs and new paint to look good, but I didn't want to spend more on the pint than the car is worth (some shops quoted over 10K). I was blown away by the quality of the body work and paint. All work was completed at the price I was quoted. I highly recommend these guys.

The door on my car had been damaged. So I went to a junkyard and got a door. They paint job was ok, but there were wave marks and there was paint on my chrome trim. The people there were definitely less than friendly. When we told the lady we had some questions about the paint job and door panel she didn't seem to care. The door looked fine but we had them take the electrical from the old door and place it in the new door. My car is a 1990 model in perfect condition. One owner and maintained all its life. It has has had rust treatment and everything. Well there were some kind of bugs on the door when they painted it, and so my front passenger door has these raises in the paint. The guy said the door probably had been bondoed sometime in its life. It never has. The new electrical in my door slightly works. The locks work less than fair. They seem to stick. Also, the interior door panel was bent a little bit, but when they returned me my car the whole panel was broken. They even put glue on the broken part, and they told me the glue was always there. That is not true. I have ownedthis car all my life, and I clean it every weekend with interior auto wipes. There was never any glue there. The driver power seat now only works in reverse. It worked great when I took I took it in there. The guy said that the car is old and thats not his problem. Also, the door panel was installed very poorly. It was very loose and I told him that, and he said no, it was always like that. He was such a lieing crook. The only reason they got one star was that the paint was ok. The customer service and satisfaction was horrible. The people who work on the interior of you car are covered in greas, and my seats look really dirty. Even as they were pulling up my car they were going so fast that they bottomed put and I could hear it. I shouldn't have paid them a dime. It may seem less exspensive than the other places, but it is not worth it. For a few more hundred dollars take your car to a reputable place. I am so unhappy with teh way they painted my car. Don't make the sme mistake I did. Go somewhere else, this place is not about your car it is about money in their pockets no matter how unhappy you are.