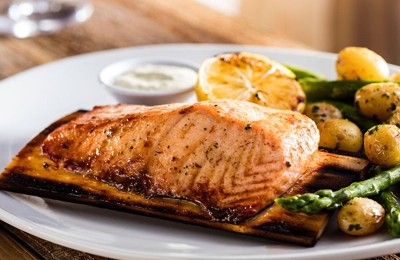 General Info
Seasons 52 is a comfortable and stylish fresh grill and wine bar offering a refreshingly balanced approach to dining where guests are free to enjoy, knowing any choice they make is one they’ll feel good about. The menu changes with the season to feature ingredients at their peak, from whole produce that arrives and is kept 100% fresh, never frozen, to carefully sourced meats and pristine seafood. Entrées are oak-fire grilled or brick oven-roasted, without a fryer in sight, to be flavorful and naturally lighter, and the Wine Bar pours 52 world-class wines by glass and signature cocktails. Lunch and dinner daily, happy hour Mondays – Friday.
Hours
Regular Hours
Payment method
master card, visa, amex, discover, cash
Price Range
$$$
Location
Plaza Venezia Shopping Ctr
Neighborhood
Doctor Phillips
Other Links

Came to Seasons for my first time this past weekend and the experience was great! Wonderful place to bring a date and the food starting with the appetizers ending with the dessert were all fantastic.

This place is great because there are many seating options, patio, dining room, or bar. The food is really good and it has a great atmophere. Reasonably priced items and a variety of tasty entrees and flatbread makes this place a great visit. We sat on the patio overlooking the lake, and it was amazing.

Glad we made an OpenTable reservation - when we arrived the bar was packed with people waiting. Definitely a hopping bar scene with plenty of local ""beautiful people"". The staff accommodated our request for patio seating without hesitation. Our waiter was very friendly and knowledgeable about the wine. He recommended a great Chardonnay. The mushroom/steak/bleu cheese flatbread app was outstanding. The lamb was excellent. Tuna nicoise (seared Ahi) excellent. Desserts come in smallish portions but are delicious (and only $2.25 each) Great place for a date or to entertain clients. Had heard from some locals that the portions are small, but they're not bad considering you might start with a couple of their fantastic appetizers.

Reservations highly recommended. Hard to get a table here if there's a big convention in town. I'd been eyeing this place for over a year and finally got a chance, and it was worth it.

Whenever I'm in the area, I'm sure to pick Season's over any of the other restaurants on Restaurant Row. The porch view is awesome at night. The food and wine selection are also amazing! Sometimes service is a little off, but for a chain, the consistency is better than most.

We enjoy the Lake seating - most

I love that Seasons 52 changes their menu each season. Also, the food is healthy and very delicious!

My recommendation: Avoid this restaurant. It started out well, but is stumbling badly.

On our second visit to Seasons 52, we were expecting to be wowed, as we were the first time. However, when my tuna arrived, it (and the vegetables) had clearly been sitting under the heat lamps for some time. I tried some and the meat was dried-out and depressing-looking. I did the sensible thing and sent it back.

Ten minutes later, it came back - in the hands of the Manager. ""How does that look?"" he said to me.

I looked at the plate. I thought I recognized some of the pieces.

""Well the tuna is the same,"" he told me, without hesitation. ""We did change the vegetables though.""

Huh? Since when do supposedly high-class restaurants just move the pieces around on a plate after they have been sent back to the kitchen?

This, unfortunately, wasn't the end of the experience. After re-ordering, we decided to ask the manager if there had been a change in executive chef.

""I'm not sure,"" he said, looking uncomfortable.

We knew, and he knew, that the truth was being avoided. Sadly (for him), we'd asked the waitress during a brief exchange earlier, and found the executive chef had indeed decamped Florida for Buckhead (good luck, folks in Atlanta).

The manager nodded, then confirmed this, then comped one of our dishes - despite my requests that he not do so - then disappeared.

What a sad end to a nice restaurant. The view is still there, but I predict you will not have to fight the crowds to enjoy it for much longer.

I was skeptical about the low calorie meals here, but it turned out to be GREAT food! I had the cedar plank roasted salmon, best salmon I have ever had, none could compare, and I eat salmon pretty often. The appetizers were delicious, the drinks were heavily loaded and great tasting, and the service was fantastic. The decor and ambiance in the place was wonderful, great night out in Orlando!

My boyfriend took me here when we were first dating and he managed to really impress me- the building itself is very modern chic, without any silly trendy stuff- granite, warm woods and a nice layout. The menu changesseveral times a year and the veggies are new each week (thus, 52). Added bonus- no butter! They don't cook with it and the inventive appitizers come with olive oil. The meals were great and the best part is the desserts. They're wonderful, yes, but you don't have to choose just one. Instead of a slab of cheesecake, they give you little servings of many different kinds of cakes and desserts, and you get your sweet tooth fix and sample all their gormet choices.

Best date spot in town. And the bill was a lot lower than we expected for that kind of place.

I had one of the best meals ever here. It's so nice to be able to order anything on the menu and know that it was prepared in a health-conscious way with no butter! My boyfriend and I each ordered an entree and shared... everything was amazing. The atmosphere is beautiful and romantic. You'd expect to pay MUCH more for the food and ambience, but the cost was very reasonable.

My fiancee and I visited on our anniversary and had a wonderful time. For us it is a place to visit for special occaisons. OUr server was outstanding, food was different (which we both appreciated) and well prepared. If you go here you must get dessert!

i have eaten at the altamonte mall location and LOVE IT. great vegettable plate for vegetarians and their seafood dishes are amazing. great atmosphere & service too!

This is what every health conscience person wants. Excellent food selections, low calorie deserts... the Carrot Cake and Cheese Cake are too tasty to pass up and so small you don't have to.
The server Blaze (is that his real name?) was very entertaining and gave great service. The location, look and live entertainment are only second to the reasonable prices and interesting dishes. The Oak Grilled Salmon melts in your mouth.

ONE OF THE FRESHEST TABLES IN ORLANDO,
PROMPT SERVERS AND GREAT FOOD THE CHANGES WITH THE SEASONS.
WORTH A TRY
GET THERE EARILY OR SPEND SOME GREAT TIME IN THE BAR.