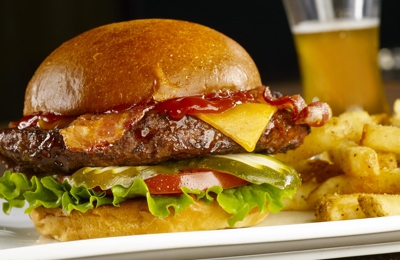 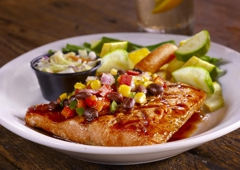 Welcome To Our House

I am a neighbor of this location. I used to go there all the time. I like the environment there; location is very convenient for me; food is good. But i can not stand the stinky smell in there. service is ok.

We arrived at our hotel late on a Wednesday night to begin our 4 day Universal Studios vacation the next day, and this restaurant came in real handy. With late hours, a full service menu, and a two minute walk across the parking lot from the Fairfield Inn, this is one of those must-have restaurants for you late arrivers and stay-till-the-park-closes people on an Orlando vacation.

They have a lobster special on Wednesday nights (for $14.95, I think). I know, because I'm a fan of lobster and thanks to the lack of communication from our waitress, I didn't have it. A banner posted on a nearby wall advertised the Wednesday night lobster special. We hadn't noticed it when we were seated, and the waitress, who was actually friendly and outgoing, failed to mention it. After our orders were placed, my wife noticed the banner, summoned our server, and suggested to her that I might want to change my order. The waitress wasn't very accommodating, made an excuse that the orders were already in, etc. I simultaneously said it was ""okay"", don't worry about it, and ended up ticking my wife off for contradicting her. So my wife was briefly P.O.'d at both the waitress and I. Later, the waitress picked up on my wife's displeasure, and tried to be extra personable to secure her tip. Eventually, everything ended well...the waitress ended up giving us a lot of information about Universal Studios, and my wife was fine. The food was good, too and the portions were generous. The Chicken Philly Cheesesteak I ordered was quite good. Next time maybe I can try the lobster.

I go to this resturant everyday for lunch with my fiance. It is because the staff is great, the food is awesome and the price is right. It is so nice to be able to go into a place like this and feel at home. The waiters/waitresses are so very great. We usually have the waiters but the waitress are just as good.

The first time I went there the huge food portion was crispy and burned. The second time I went there was at about 1.15am. Although the kitchen closed at 1.30 the servers gave me an attitude about ordering and when they did bring me my food it was slid across the table at me! Apparantly the place used to be good.

The menu is very good. I don't think I have ever had something that I did not like. The service can be slow at times.