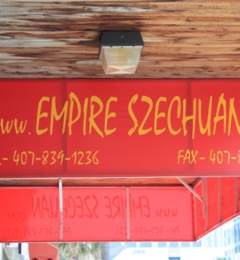 Living downtown, this has been my go-to Chinese takeout place for awhile now. Bourbon chicken is great; generally what you would expect. Inexpensive, on-time delivery and good combo platters. Wouldn't recommend the shrimp w/lobster sauce but every other dish I have ordered from here no complaints.

I went to Empire Szechuan recently and got a 3 meat, one side to go meal. The sweet n sour chicken was delicious! All white meat and tasty sauce (and they give you extra if you ask). The bbq pork however had several fatty pieces that I wasn't too pleased with and the rice had been sitting for a while. All n All though, better than mall chinese food, not as good as other chinese restaurants. * Update! It's been a while since I first posted this and since they have only gotten better. I get their lo mein at least once a week, yum! **Update! Delivery is SLOW

basically what i wanted when i wanted

If you're craving some Chinese food in Orlando, then you've come to the right place! Empire Szechuan is known for being an outstanding Chinese restaurant. They offer multiple other cuisines including Chinese, Take Out, and Asian.

In comparison to other Chinese restaurants, Empire Szechuan is inexpensive.

If you would like to investigate further on pricing around all menu items, YP.com has provided you with the complete Orlando Empire Szechuan menu.

There are other nearby neighborhoods that Empire Szechuan in 32801 serves beside Orlando, and they include places like Bay Hill, Bay Park, and Holden Heights. If you want to see a complete list of all Chinese restaurants in Orlando, we have you covered!

Looking for other top Chinese restaurants in Orlando? More popular places to try are Sunflower Chinese Kitchen, Taste of Asia, or Sunshine Seasons. If you don't mind traveling a bit, we can also recommend more great places to eat Chinese food in nearby cities. Just give Lucky Garden in Deltona, China Bay in Winter Springs or China Wok in Tavares a try. Make sure to come back and leave a review at YP.com about what you liked and any recommendations for other users in our community!

Don't forget to tell your friends how your experience went at Empire Szechuan in Orlando by leaving a review here at YP.com!