General Info
Welcome to Oley Valley Animal Clinic Oley Valley Animal Clinic in Oley, PA, is a companion small animal pet veterinary hospital. It is our commitment to provide quality veterinary care throughout the life of your dog, cat or other small pet. Our veterinary facilities are designed to assist in routine preventive care for young, healthy pets, early detection and treatment of disease as your pet ages, and complete veterinary medical and pet surgical care as necessary during their lifetime. Our veterinary doctors and skilled vet staff welcome you to our practice serving Oley Valley.
Hours
Regular Hours
Extra Phones 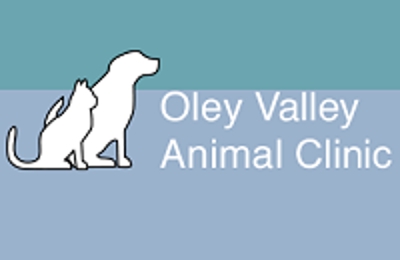 I live on a very small income. I saved for months to get my fur babies ear mite medicine which prevented him having seizures $80.00 only to go in and be told I could not have it without paying another $65.00 for an office visit. Could not afford both so according to them by boy goes without his medicine..

I just came back from having my cat put down there. My cat went into respiratory distress at home, she was battling cancer and I was hoping to have her pass away at home... Things were going according to plan, meaning she was resting peacefully until her breathing became very rapid, panting, so I called them, to say I was on my way, and is there anyway they could come out to my car to euthanize her, since she was in a lot of distress in the car. The receptionist right away said; (over the phone) what type of burial package would you like? She was "COLD AS ICE." Then she says; No... we won't come out to your car, you must bring the cat inside our building. I go inside and she wanted to be paid first, meanwhile, my cat was suffering, panting, gasping for air, while I was running my card in their machine. What's even worse... I stood in the exam room waiting there with my suffering cat, another 10 minutes waiting for the Vet to come into the room! I just couldn't believe it! After the shot was given, after two attempts... (she couldn't find a vain in her leg, missed completely, she ended up giving the shot in her front right leg), my cat passed... I tried to ask the Vet some questions afterward; about how my cat looked... and was she suffering? And her answer was "I don't know, I'm not familiar with your cat, you'll need to ask "Dr. Hart that question." Even the attending Tech, was very matter of fact, no sympathy. On the way out... None of the rude staff even had a kind word to offer, I carried my deceased cat through there waiting area, as they stared into there computer screens, pretending not to notice you, as you walked past them. Shame on all of them!!!

Dr Hart is the best! She is an "on the floor with your dog" kind of vet. It really shows that she cares about these animals. I've seen vets before that stand across the room and have always wondered how can you be a vet when you clearly don't like animals. Not her, she is great! She has awesome follow up too. We started a new medicine and she had us follow up with some labs which detected that they were affecting our dog's kidneys. She then went over multiple options for us and we found an option that worked for our dog. Very highly recommend her!

Caring.compassionate. Affordable. My two kittens get excellent care! I highly recommend this group!

We had to have our beloved Rocky euthanized in Oct 2009. As a retired Licensed Veterinary Technician and an owner, I was appalled at the treatment we received.
After the receptionist announced why we were there so the whole waiting room could hear, we were told to ""have a seat."" So there we sat, I was crying uncontrollably and was consoled only by the other clients who were now upset as well. 20 min. later we went into the room and the vet was as cold as ice. We put Rocky on the table (no blanket, just a cold table) and before I knew it, he was injecting the medication without a kind word to myself or my husband or to our beloved Rocky. Once Rocky was at rest, the vet said, ""stay as long as you need. Open the door when you are done."" No ""I am sorry for your loss."" Nothing!!!
As we were leaving, the receptionist was on the phone waving a piece of paper at me. Ironically, when I took it from her and opened it, it was a small packet on how to grieve for your pet. I don't think anyone in that practice ever read that. As a Vet. Tech. I was horrified that not one of these emplyees had a warm word or touch for grieving pet owners losing their pet after 12 years. I am not a client of theirs and went there, because they offer this service due to the fact that they have an on site crematory. So, never again, will they ever touch one of my beloved 4-leggers. Perhaps the icing on the cake, was the phone call to let me know that I could pick up Rocky's remains. The receptionist was so pleasant on the phone, you might have thought that I was getting a call to pick up my now healthy dog instead of my Rocky's remains. I was a Vet Tech for 24 years and I just can't believe that there are practices out there with such cold hearted people. You all should be ashamed of yourselves!!!!

I've been to a few vets around town and OVAC is by far the best place i've ever taken my dog to. Dr. Barrow & Dr. Fatkin are absolutely awesome! My dog has health issues and they basically saved her life.
As for costs, they are reasonably priced.

We drove 2 1/2 hours and crossed a state line, to get to this clinic. There was a reputation for ""expertise in health knowledge"" at this location, amoung our breed's people (Shiloh Shepherds), that I wanted to access. So we went to OVAC. We were very pleased with the genuine kindness that was shown to us and our dogs in all areas of this Clinic. A true testimony to the clinic is when the vet assistant took my dog back to the waiting area. He wagged his tail and went willingly with her. Dogs know people's hearts. There were jokes about ""adopting Luke for the office dog mascot"". The front office staff was just amazing at taking my worries and my stress away over the tests being performed and putting me at ease with everything being done. The dogs (my friend also drove a distance with her dog) came out chipper, a bit tired... but very much expected after anesthesia, AND STILL our dogs wanted to be with the people in the office. Tails still wagged as the dogs continued to be pampered. And we have Shepherds! We can't thank Dr. Barrows enough, nor the staff involved, for such a positive and rewarding experience. I wouldn't hesitate to ""drive the distance"" to this Clinic again, as I was thoroughly happy with the experience and the professionalism shown as this location. There prices were below any other location that I could find in my surrounding state area. What a refreshing breath of air that a vet still has costs that are affordable and reasonable. AND they were so funny, I had to remind them that I wanted to pay my bill....they seemed to be unconcerned or anxious about taking my money as much as they wanted to be with my dog and offer him affections and attention.
To Dr. Barrow and the staff. Thanks for such good care, reasonable costs and for being a cut above most.

I will NEVER go back to that office again. I must say I have NO complaints about the actual veterinarians there, but the office people and the techs are very rude. Every person I talked to gave me a different answer. Was charged twice for a fecal exam and both came back negative. Went to a different vet and sure enough, my dog had worms. It seems they are more concerned about getting money out of you than the welfare of the animal.

We have been taking our dogs to Dr. Barrow for several years, and he is wonderful! He is always caring and attentive; we couldn't ask for a better veterinarian.