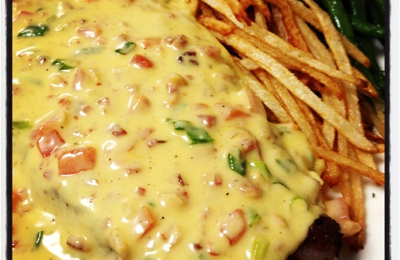 Perhaps the Best Damn Crabcake You've Ever Had!

General Info
We offer a great atmosphere with exceptional food and service. Happy Hour Monday thru Friday from 4-6:30 offering drink specials $5 appetizer choices. Rococo Northpark has a private dining room to host a variaty of events, meetings and dinners. Catering is also available for 5-500 people. Please contact a member of our management team with any questions.
Hours
Regular Hours
Services/Products
Rococo offers a great atmosphere for you to enjoy any occasion.  A quick lunch, business dinners, romantic night out, Sunday family dinners, the spectacular Chef's Table, or an event in our private dining room!  With amazingly fresh seafood, hand crafted daily features, great desserts, wine, classic cocktails and after dinner drinks, we really do have everything you need.  We are known for having the BEST crab cake in OKC, and we know you're gonna love it!  Come by and say hi to Chef/Owner Bruce Rinehart (he's the guy in the funny pants).We can't wait to see you and welcome you to our family.
Payment method
amex, discover, visa, master card
Price Range
$$
Location
NE corner of Northpark Mall
12252 N. May Ave
Oklahoma City, OK 73120
Neighborhoods
Quail Creek, Northwest Oklahoma City, Camelot Bel-Aire
Amenities
Private Dining Room w/
- seats for 64 people
- HD projector
- 50 sq. ft. projector screen
- independent audio in the room
- private bar
Chef's Table
- Chef will design you and your guests an exclusive meal. 3-5 courses available
- exciting view of the kitchen
- seats 8 people
- call and speak with a manager to book your evening!
Catering
- Your place or Ours!
- We cater for 5-500 people
- Offering a wide range of cuisine
Gluten Free Food and Beer!
Languages
English, Spanish
Other Link

We've been going to Rococos for years. I never have had a bad experience & the food is ALWAYS amazing. However, our dining experience has got me to the point of no return. How it started....When I originally called to get a reservation I was left on hold for 15 minutes. I hung up & made my reservation via open table. I figured that they may have been busy or accidentally forgot I was holding. An isolated incident. (This should have been my first clue.) We arrived early & figured we would sit at the bar until we could go to our table. We had a party of eight. The bartender was great & very nice! Once we sat down to our table though that's when it all went downhill. I'm not sure who our actual waiter was because we delt with at least 3 different people serving us. The first guy got our drink order & appetizer. Getting our drink order down was nothing short of a fiasco. That's just the beginning. The second waiter came over and asked For our drink order again. Obviously communication was null & void between employees. So the second waiter took our drink order again & when he did he had two drinks he was clearing from our table. We asked him very politely if he heard us ask for another drink. Because he didn't reply back or acknowledge that we asked for anything. He held out his arms, empty glasses in each hand & said to us "do you see I only have two hands?" We were floored that he said that. We chalked it up to maybe he was having a bad day. So we tried to make sure to be polite as possible. Yet, we felt like we were walking on eggshells to appease our waiter. (Why should we have to do that?) The next instance occurred with our appetizer order. One of the appetizers we ordered was fried calamari. About 25 minutes in we were informed that they were out of calamari & the waiter asked me to pick a new one. 10 minutes later our calamari came out. I said, I thought you were out of calamari, the first waiter told us that & now he's bringing a new appetizer. Then!!!.......it took our food another hour to arrive. At this point we're annoyed. We're walking on egg shells, we are being polite, we're trying to understand what we did to be treated so badly to begin with & that's exactly what I asked the manager. She did say sorry but was completely annoyed by me saying something to her & dismissive of our complaints. Listen, if you can't stand having a customer service type job, just don't! There's so much more that happened & can't fit it all in. But trust me when I say the service is the absolute worst in the world. Eat somewhere else!

Great time! I love their Sunday Brunch! By far the BEST crab cakes! Staff is really fun and helpful. And the food is amazing! They even have new menus and I am eating my way thru the new lunch menu! Do yourself a favor and go to Rococo! Both locations are great! The one on Penn is so cozy! I love them both!